You are here: Home / Features / Lost in Space: Jupiter Ascending is a Bloated, Chaotic Mess That Forgets It Actually Has Characters 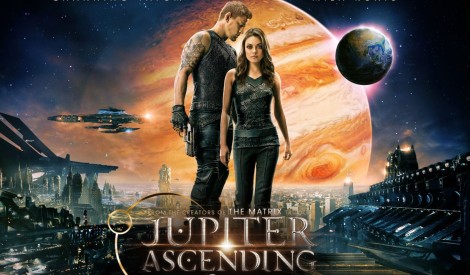 The kindest description that I can summon for Jupiter Ascending, the latest epic sci-fi project from the Wachowski siblings, famous for their groundbreaking classic The Matrix and its unfortunately less-than-groundbreaking sequels, is “immensely disappointing.” Starring Mila Kunis, Channing Tatum, Sean Bean and Eddie Redmayne, Jupiter Ascending tells the story of a young woman, Jupiter, an illegal immigrant (or, yes, “alien”) living in Chicago with her Russian family who also employ her in their home-cleaning service. Despite confiding in the audience that she has always felt destined for incredible greatness, Jupiter wakes at 4:45 each morning to clean toilets, marking the days with a grunted chorus: “I hate my life.” As it turns out, she will discover that she is heir, through a fairly incongruous genetic coincidence, to the ownership of Earth.

This discovery catapults her into the midst of an internecine rivalry between three siblings who control the vast fortune of the galactically powerful Abrasax family, including the Earth, which is her inheritance. We are informed, by way of their squabbling, that Earth is considered immensely valuable, a sort of planet-sized winery, dedicated to producing the human cellular material so prized for its capacity to restore youth in the ’verse’s wealthiest inhabitants, also humans, whose lives span the millennia. Upon learning of Jupiter’s existence, the siblings develop various schemes to prevent her from laying claim to her dominion of the Earth. As part of one such scheme, she is to be kidnapped by a disgraced ex-military hunter, Caine Wise, who is a “splice,” half-human, half-dog, a pedigree accompanied inexplicably by a chronic overabundance of black eyeliner. His intentions shift, of course, when he finally meets her, and he becomes her protector, deciding that he must try to deliver her to his former co-workers on the intergalactic police force who can help her to initiate the process of Ascension, by which she will claim her title and inheritance.

If it takes 250 words to vaguely outline the plot of your upcoming science fiction epic, you might consider it necessary to push past the two-hour mark somewhat. Undoubtedly, the Wachowskis intended to do so, potentially even imagining another trilogy of films to flesh out their story. There is a good deal of evidence that this project has been victim of numerous attempts at damage control. The original script was rumored to be a startling 600 pages long. Maybe there were actual characters in there; the editing room floor is an unmarked grave. The film was also delayed by Warner Bros. for about 9 months, bumping from a coveted June release into the doldrums of February, a move seen in the industry as a putting out to pasture for films that studios have given up all hope of rescuing.

It is not impossible to conceive that, given adequate time, and the help of a film-savvy Rick Rubin type, the film could have been at least a partial success. The trouble with sci-fi epics is that their effects budgets are often so large (Jupiter Ascending cost an eye-watering $175 million) that there’s little hope of a second chance. Once all the money has been spent on making your gorgeous ships and incredible interplanetary storms, there’s little left for last-minute re-shoots and other cost-intensive post-production. The consequence of all this for Jupiter Ascending is that it wavers between stunningly beautiful and jarringly campy. There are effects in this film that made my jaw drop (I would probably still buy the coffee-table book of concept art) and there are effects that actually made me laugh, loudly and inappropriately; fireballs lifted from The Princess Bride, green-screen that would make even a high-school Youtuber blush.

All this brings us to the final flaw which completely dooms the project. I’m a forgiving filmgoer, in general, and willing to suspend a great deal of belief in service of exploring an interesting concept or spending time with an engaging protagonist. Hands full with a world that they can’t quite realize and a plot their film can’t quite contain, the Wachowskis seem to forget entirely that their film was ever meant to feature characters. Functionally, there are none. Jupiter’s backstory is odd, specific, and pretty much the only thing we know about her. When the springs of the plot are set into motion, our only impressions of her are that she does like trying on her client’s expensive jewelry and doesn’t like scrubbing their toilets. The expository, world-building dialog does almost no characterizing at all, and we are left with what amounts to an elaborately decorated chess game.

Where blankness and sketchy characterization made sense for Neo in The Matrix, as a parable of the anonymity and dehumanization which defines the digital age, it is an insurmountable stumbling block for a movie that lacks a familiar setting, coherent plot, or any other compelling characters to play off the protagonist. In the end, we never learn enough about Jupiter to care, particularly, whether she is named Space Queen or turned into expensive silver goo. That there is an utterly cringe-worthy romance between Jupiter and Caine is neither surprising nor interesting. Despite what looks like an earnest effort from Kunis, there is no chemistry whatsoever between the two actors and her longing glances and suggestive mouth-hovering do little more than make the audience supremely uncomfortable.

In short, it’s difficult to know what to make of all this. There is a sense of being told a story at which you are unsure whether it is appropriate to laugh. The overarching plot and each of its constituent elements are both so brazenly pilfered from the pantheon of mediocre storytelling that it’s difficult to believe that anyone would expect it to be taken seriously. Indeed, there are hints of a competing vision – buried under layers of self-seriousness and gratingly manufactured melodrama – a story humorous and light-hearted in its sticky-fingered embrace of fairy-tale and fantasy, with Jupiter a self-aware protagonist, vocally bemused and delighted with her obviously well-worn story.

Redmayne’s performance, for example, is suggestive of such a film; he is gleefully villainous, complete with a ludicrous space-posh accent, likely employed to conceal barely suppressed laughter. In particular, Kunis’ delivery during Jupiter’s ridiculous moment of self-discovery, when she sees that her attraction to Caine may well be a consequence of being a “dog person,” is a part of a much better movie, one which I would dearly have loved to see. Whether this vision belonged to the Wachowski siblings, another producer or writer involved at some stage of the project, or some last-ditch studio attempt to recover something recognizable from the growing wreckage, is never clear. The Wachowskis’ imaginativeness when it comes to concept, world-building, and artistic tone is matched only by their stubbornness in retreading the same concepts that teemed excitingly in The Matrix; spirituality, bureaucracy, bondage, shiny leather, technological body modification, reincarnation, shadowy, invisible agents of power, and the universal fantasy of being rescued from life’s crushing monotony to be told that you are “The One.”

Unfortunately, Warner Bros. lack of faith in the project was either well-placed or self-fulfilling. Jupiter Ascending fails at almost every task it sets out to accomplish. The story is so hamstrung by time-constraints and over-revision that it plays as a succession of cliché moments, one after the other, with character and place names inserted, mad-libs style, during post-production. The visual art of the film, stunningly realized in some moments and laughably uninspiring in others, is not consistent enough to hold the audience’s attention and prevents them from being immersed in settings that could otherwise have been captivating. Finally, the characters are all but absent, given placeholder motivations that lack any uniqueness or personality, strung along through a script that does little more than explain the names and functions of the film’s wheezing, broken machinery.

Jupiter Ascending could have become a new camp-classic, complete with marginal fetish objects, amusing self-aware genre commentary, and characters who breathe, even if their breath puffs out as cardboard-cutout clouds. Instead, we are left with a monster – gutted, torn into pieces, stitched sloppily together again, and grotesquely reanimated, lurching painfully across the screen, bleeding money, and begging for death.

Johnson Hagood is an aimless millennial living in Southern California, where he did not grow up, despite being a long-hair and everything. You can follow him on instagram @ants_in_my_eyes where he quotes Kanye West and brags about how much money he wastes on expensive craft beer.