You are here: Home / Features / AD: After Death Brings Out the Best in Scott Snyder and Jeff Lemire

As we hurtle ourselves closer and closer to ecological destruction, countless pieces of cautionary fiction about our bad behavior are emerging. Many of these works buffer pessimism for our future with optimism about our problem solving abilities, like the chic and methodical Arrival, but some works are a bit more realistic in tone if not narrative. Scott Snyder and Jeff Lemire’s new Image miniseries A.D.: After Death seems poised to fall into that latter camp, featuring time hopping flashbacks, purposefully confusing timelines and tenses and a number of other signature traits of this end is nigh sub genre of sci-fi but also melancholic nostalgia and an overwhelming sense that everything is being communicated from beyond the point of no return. A.D. reveals itself to be a story about the oppressive (loss) of memory as much as it is about destruction and unease.

As individual creators, Snyder and Lemire have always been comfortable exploring the tyranny of memory, particularly as it relates to family histories, and you’d be forgiven for thinking that the pairing of these two creators on a story like this would make that borderline insufferable. But something about this particular story brings out the best in these two superstar creators, enabling their signature traits to coalesce and overcome their worst habits, or at least transform those habits into something more endearing and intriguing.

This is immediately clear in the opening framing of the story, where protagonist Jonah Cooke exhaustively describes his first memory, a doomed vacation to Florida with his parents. Snyder fills the pages with text, initially making one wonder if this will be an illustrated novel rather than, y’know, a comic. Lemire is restricted to lush watercolor pages illustrating select moments from this retelling, and the pages are drenched and saturated in the artifacts of age– bent corners, yellow hues, decaying inks. Then this gives way to either a dream or a vision from a future, Cooke now grown and ragged, pursued by acidic tentacles, warned by glowing devices. Before long we learn that the opening is an entry from one of Cooke’s journals and that this is more than a clever voice over device, it’s an illustration of how memory works in a world where death has not been conquered, per se, but no longer functions like it used to, causing humans to live countless years.

Where Arrival is a work that functions by consciously deceiving you, counting on your assumptions to color your view of the narrative before ultimately revealing the truth, this twist in A.D.’s narrative isn’t deceptive but willfully murky. Snyder and Lemire leave the details of how things function in an “After Death” society vague but the more we interact with the characters, the clearer it becomes that living beyond death means having too many memories and too much time to have functional recall. Still, Cooke is an outlier, a human who clings to the past to pinpoint where things went wrong while everyone around him has surrendered memory and merely wants to move on.

A.D. is one of Lemire’s most passionate and abstract works in quite some time, dropping the flat vintage feel of his recent Dark Horse work and the cumbersome antics of his Big Two material for a raw and unpredictable mish mash of various elements of his aesthetic. That works beautifully with the narrative’s focus on themes of memory degradation and hazy thinking, and the heavier than normal use of text (beautifully laid out by Steve Wands, it must be said) helps ground the reader, making them move more slowly through the pages, drinking in the ancient feel of the pages as much as the storytelling. There’s not much to the characters yet– we know Jonah Cooke is an obsessive thief and that this plays into what happened to humanity somehow– but that fits what the creators are going for too. Without a clear memory and therefore an understanding of identity, is it any wonder that we would become somewhat anonymous, reduced to individual traits rather than full personalities? 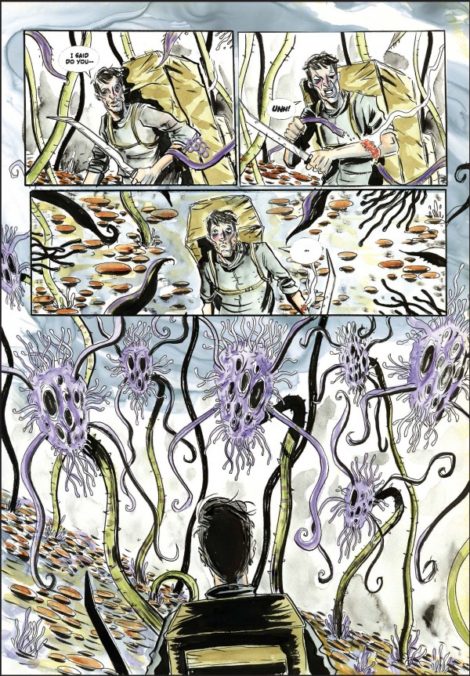 And for all that weighty text, the plot itself is notably disciplined, its beats doled out casually in conversation between characters. This is how we learn that invisible force fields kill livestock when they move beyond them, that an expedition ventured out into the alien force that upturned death and hasn’t sent word back for six centuries, that an early fascination with the halting of death has now given way to intense boredom and listlessness. A.D.’s characters present and discuss these mysteries but the long, endless passage of time has caused them to stop caring about their answers, functioning as metacommentary on fans who stick with a series for so long they eventually stop caring about reveals and surrender to the lull of nostalgia and familiarity.

And therein lies one of the most despairing warnings from Snyder and Lemire about the direction humanity is heading in. It’s not simply that we’re doomed to repeat history, but that as we become more immersed in digital communication we’re caring less and less about preserving real memories, content instead to accept that the way things are is how they have always been and always will be. Tracing the points where things went wrong might not solve anything, but in A.D. as in life, it at least presents us with some kind of order, a path to work out and maybe in the process learn how to get off it before it’s too late.