You are here: Home / Features / Adventures in the Floating World: Gyo

Once a month, Nick Hanover educates himself on manga by going on Adventures in the Floating World, learning about series he has missed out on over the years. Up now is Gyo, a bizarre horror manga by legendary artist Junji Ito, best know for his incredible series Uzumaki. Gyo was first published in the seinen (young men’s) magazine Big Comic Spirits starting in 2001 and was first released in North America by Viz in 2003.

Originally my next column was going to be dedicated to Osamu Tezuka’s mid-period work Ode to Kirihito, a pretty unique manga that combines the feel of medical thrillers like Outbreak with traditional Japanese folklore. But the combination of that work’s length, its heady subject matter and its grim racism (which I was digging into as real racist horror was breaking out in New York and Ferguson) got the better of me and I ended up distracted by Gyo, a horror series Guillermo del Toro mentioned in a Reddit AMA. Toro spoke about a semi-awkward meeting with Gyo creator Junji Ito, who I sort of knew from the bits and pieces of Uzumaki I’ve seen, but what really drew me in was this description of a scene in Gyo:

When the shark takes the stairs in Gyo, grows the mechanical crab legs chasing them up the stairs, I literally threw away the comic and yelled “NO!” I was so absolutely scared.

Toro is one of those directors I’m naturally drawn to because I feel our interests intersect, so I would have been inclined to follow his recommendation regardless, but the description of a shark growing “mechanical crab legs” in order to chase people up some stairs made me drop what I was doing in order to track down Gyo. And I’m glad I did because holy fuck, Gyo is quite an experience.

There’s not much point to breaking down the plot of Gyo, but the gist of it is that Tadashi and Kaori are a young couple whose vacation is ruined by the intrusion of a rotting fish that is defying death by moving around on mechanical, crab-like legs. Kaori has an extremely sensitive sense of smell, so she naturally asks Tadashi to dispose of the crab fish but it refuses to go away, forcing Tadashi to seek out the help of his uncle Koyanagi, who conveniently happens to be a marine biologist. Not that his insight matters, because almost immediately after the couple return home, Japan is invaded by more of these crab-legged fish. There’s some nonsense about a failed secret WWII experiment with biological weaponry but the reason for the mecha-fish invasion doesn’t matter anywhere near as much as the endless opportunities for perverse hybridization and rotten mayhem it provides Ito.

I can honestly say that throughout a life consuming disgusting works of art, Gyo is up there as one of the grossest. I don’t mean that in a Pink Flamingos “let’s literally eat dog shit” kind of way, or A Serbian Film queasiness. No, the grossness of Gyo is a total grossness, where almost every panel is flooded with assaults on your senses, from the decaying mecha-fish to the stench that rises from the page as a thick fog to the unflinching depiction of repurposed orifices. Gyo is a horror work that makes you feel sorrier for the survivors than the victims, that forces you to view a character’s wish for suicide as a totally logical response to the nauseating apocalypse Ito has dreamt up for his homeland. 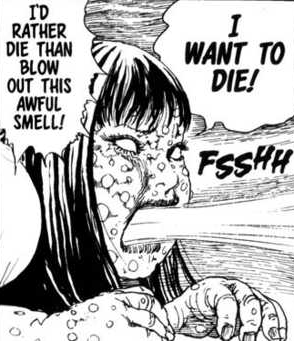 As an artist, Ito is gifted (cursed?) with an eye for deeply unsettling imagery that gets to the heart of fears you didn’t even know you had. If you’ve ever ventured to a fish market or been to the beach on an especially hot day, then the “awful smell” Gyo’s characters are constantly talking about is likely already hitting your nostrils, but now it packs the additional punch of conjuring images of reanimated fish corpses. Likewise, Shark Week viewers are happy to partake in the visceral thrill of observing nature’s deadliest predator from the safety of a land locked living room, but Ito calls on the primal fear of these creatures emerging from their shadowy depths to pursue us on our own, previously safe habitat: 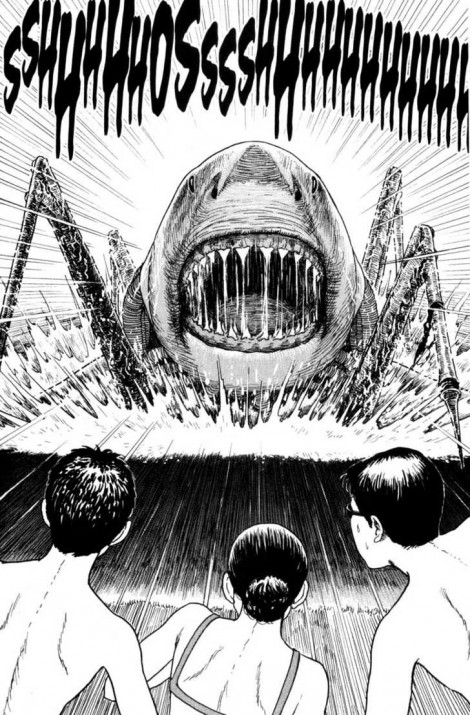 The thing about that page is that it puts you squarely in the perspective of a beach goer who is witnessing this unthinkable event as it happens, but it’s also a full page spread so you have the luxury of stopped time to analyze every element of the threat heading your way. Which means that not only do you notice the darkness of the water the shark is waltzing out of, not only do you notice the massive maw of the beast with its rows upon rows of razor sharp teeth, you also notice that even those crab-like mechanical appendages that allow the shark to come out of its home are sharp as fuck too. There is no way that creature isn’t going to tear you to shreds or impale you or do both. And as if that wasn’t enough, even creatures you may have formerly viewed as basically safe, like say, a whale, are in on the goddamn action too:

The thing is, these terrifying monsters of the depths who are now walking on land aren’t even the most horrifying element of Gyo. Ito saves that honor for the plague that comes with these creatures, a curious hybrid of man-made mechanical engineering and man-made genetic modification on the bacterial level that is somehow carried via the stench from the marine organisms and turns people into bloated crab-legged killers themselves. The story mechanics of the fish plague are admittedly a little half-assed– why do humans and creatures like sharks and whales remain alive when possessed by the legs but most fish don’t? how the fuck does the gas not only power these legs but also give them some kind of homicidal sentience? why hasn’t Viz rebranded this series as The Walking Fish yet?  But there’s no arguing with the effectiveness of the grotesque imagery.

There’s some vanity at play in the fears Gyo preys on, but given how vain we are as a species, that’s kind of perfect. The victims of the fish plague aren’t just suffering from a potentially killer, transmorphing bacterial infection, they’re also forced to deal with the knowledge that this infection is going to make their body break out in ugly boils as it bloats to an obscene size. There’s even a loss of faculties, as the infection causes its victims to fart constantly in order to infect more organisms through the fumes. Prior to Gyo, I don’t think I ever imagined deadly farts could be a storyline I could take seriously or be at all terrified by, but somehow Ito accomplishes that, mostly because of how successfully he captures the anguish, embarrassment and horror on the faces of the plague’s victims

Ito takes the concept of Gyo completely seriously, no matter how ridiculous it sounds in retelling, and that commitment allows the story to overcome its narrative failings. After all, the willing suspension of disbelief only requires that a creator establish a believable internal logic for their story and adhere to it in order for the audience to set aside their questions. Gyo may not have the hard science element of David Cronenberg’s brand of body horror, but it’s difficult to think of another work that so effortlessly nails the embarrassment of a failing body as it remains true to its horror goals and it doesn’t hurt that Ito ends the series before all of the strain of the bizarre backstory causes it to fall apart. My one major gripe with Gyo is that I couldn’t give less of a shit about any of its characters, but that too may have been Ito’s goal. Everyone in Gyo is a monster of some sort to begin with– Tadashi is a self-centered dick, Kaori never stops whining (given her fate, who could blame her, though?) and Dr. Koyanagi is so driven by curiosity he dooms everyone around him. But all of the major characters really only exist in order to provide perspective on the apocalypse Ito has brought to life. There are never really any answers, and nothing is really done about the plague, the closest the story gets to providing a happy ending is Tadashi remarking that Kaori no longer has to deal with the stench since she’s, well, dead.

Inventive, terrifying and full of disgusting but captivating imagery, Gyo is a horror work that gore hounds and cerebral consumers alike should be able to get behind. I may have joked about it being The Walking Fish, but the sad sack mopey apocalypse Rick Grimes and company inhabit pales in comparison to the fatal fart filled fish end times Gyo represents.

Recommended? Yes, unless you have a weak stomach or aren’t into horror

Up next: Ode to Kirihito (but seriously this time)

Nick Hanover got his degree from Disneyland, but he’s the last of the secret agents and he’s your man. Which is to say you can find his particular style of espionage here at Loser City as well as Ovrld, where he contributes music reviews and writes a column on undiscovered Austin bands.  You can also flip through his archives at  Comics Bulletin, which he is formerly the Co-Managing Editor of, and Spectrum Culture, where he contributed literally hundreds of pieces for a few years. Or if you feel particularly adventurous, you can always witness his odd .gif battles with friends on twitter: @Nick_Hanover