You are here: Home / Features / A True Freak Must Be Born: Will Freakshow Be American Horror Story’s Best Season Yet? 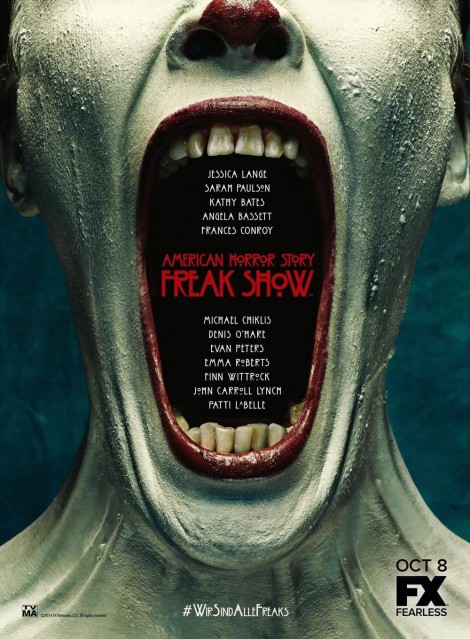 Few works are as difficult to critically evaluate as each new season of American Horror Story. From its shifting “anthology” format to its gleeful abandonment of the massive number of plotlines each season cranks out to its total adherence to a philosophy of style over substance, AHS isn’t a television series anyone would truly call “great,” yet every year it remains one of the most consistently entertaining and accomplished shows. It’s entertainment for the sake of entertainment, basically, which is why the new season of AHS might just be season that allows the show to truly live up to its potential, set as it is in a touring carnival centered around a “cabinet of curiosities.”

To date, AHS‘ biggest flaw has been that it tries to do much and every season inevitably collapses under the weight of the ideas the showrunners attempt to cram into the main storyline. Even last year’s AHS, with its seemingly restrained original witch academy narrative, couldn’t help itself from veering away from the plot set out in the premier, exploring everything from a jazz musician axe murderer turned ghost turned man again to an attempt at fixing the racial insensitivity of an immortal New Orleans socialite. Part of the problem has been that AHS has always restricted itself to a single main setting, whether it’s a haunted house or a haunted asylum or a haunted witch academy, and that habitat restriction actively worked against the nomadic nature of the show’s plotting. But by given itself a touring carnival as its setting, AHS has also given itself more room to breathe and plenty of organic reason to add and subtract from the plot at will. Granted, AHS‘ circus tv predecessor Carnivale found a way to suffocate itself with a similarly open setting, but the junk food David Lynch tone of AHS at least means it will never hurt for momentum– even if the show once again can’t juggle the plots, its track record for consistently providing entertainment is more or less perfect.

The show has also found a better way to utilize Jessica Lange this time out, casting her as the “enchantress” in control of the cabinet of curiosities, Fraulein Elsa Mars. Like AHS itself, Elsa has major ambitions, though the ambitions that would benefit her troupe can all be connected to her personal ambitions. The premier centers this around the discovery of a pair of conjoined twins played by Sarah Paulson, who enter Elsa’s life after the police of Jupiter, Florida have discovered them at the scene of their mother’s murder. Ever the entrepreneur, Elsa realizes the twins might be the answer to her carnival’s economic woes (and a way around selling her own body to get an extension on rent), but more importantly, they can bring out a crowd that can witness her own musical performances. There’s no shortage of weirdness in AHS, but the premier arguably unveils its most bizarre moment with Elsa’s performance (to a mostly empty tent), a Cabaret take on David Bowie’s “Life on Mars?” that would be strange even if this wasn’t a show explicitly set in the early ’50s.

Lange’s anachronistic performance may be odd, but at the same time it effectively conveys her character’s representation of the show’s own need to entertain– it wants you to like it so much that it doesn’t give a shit about suspension of disbelief or narrative truth or even the timeline itself. The premier places this scene as a thematic climax, bringing Elsa’s intense desire for stardom to life but also showcasing her view of the curiosities she “protects” as little more than stagehands and extras. It’s one of the many looming schisms the show foreshadows, as Elsa’s matriarchal relationship with “lobster boy” Jimmy Darling (played by AHS regular Evan Peters) finds most of its conflict in Darling’s desire to just have a “normal life” versus Elsa’s need for recognition. Complicating matters further is Jimmy’s mother’s role as Elsa’s right hand woman, a bearded lady (played by Kathy Bates with the strangest accent since the emergence of Tommy Wiseau) who has bought into Elsa’s argument that the carnival is the only home these people will ever have. Elsa doesn’t really believe that, it’s just a tool for manipulation, something she uses to initially less effect on the twins, but by the end of the episode, even Darling is reconsidering his desire for a normal life after a bleak incident drives home the perception the outside world really has of him and his fellow “monsters.” 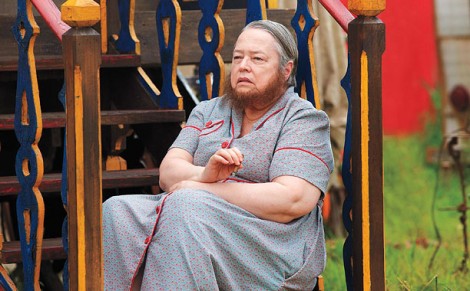 Part of the reason that outside perception bubbles to the surface in the first place, though, is because of the activity of an actual monster, a murderous clown killing off townsfolk while looking like the scariest giant clown this side of Puddles. The twins are naturally a suspect after fleeing the hospital before the police could question them fully about their mother’s death, but their appearance has escalated the tensions, particularly since Elsa was so bold as to advertise their arrival at the carnival after they had escaped custody. As far as we know, no one in the carnival is aware of what the clown is up to (though he makes an appropriate background appearance during the episode’s bleakest carnival scene) but before the episode is over, Darling has led his peers down a route that you can’t return from. For fans of that classic carnival work Geek Love, it should be even more entertaining to see a character with self-described flippers slowly morph into a murderous messiah role but the show frames the descent into darkness in a way that equally recalls Freaks (and of course there is a choice “one of us” reference in the dialogue). The tragic story of the real life Lobster Boy Grady Stiles doesn’t bode well for Darling, either, though it’s unclear how much of this season of AHS will reflect Stiles’ life in noted carnival city Gibsonston, Florida given that AHS’ setting of Jupiter is less receptive to carnival folk.

The myriad paths Darling’s story could take make it clear how much potential this season of AHS has, though, and the bickering competitiveness of show biz likewise gives AHS more room to explore the catty end of its personality with all these hints at schisms to come. Darling is even at the heart of the other major divide the show hints at, between the twins themselves, who we’re told “have two hearts but only one reproductive system.” It’s not exactly a subtle script moment, but AHS embrace of flexible sexual attitudes is frankly pretty refreshing so it’s easy to forgive the blunt dialogue (except Lange’s “has anyone ever tasted your…cherry pie?” line, which I’d prefer to pretend never happened). Peters has a knack for bringing heaps of charisma to his frequently half-baked AHS characters, but Darling is a role he’s really able to bite into, effortlessly oozing charm while he seduces the less forward of the twins, provides bored housewives with a special kind of awakening, and talks his compatriots into violence. 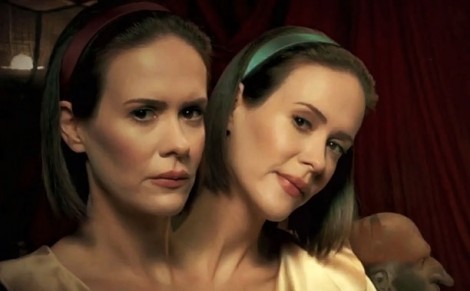 It might be too early to say any of the characters on AHS this season are fully three dimensional, but already they’re more nuanced and sympathetic than the bulk of their predecessors. Last season in particular found obnoxious personality traits masquerading as humans far too frequently, but each of the main characters this time around have understandable ambitions, desires and fears. That so many of them want some kind of spotlight also allows the show to create conflict more organically, and that bodes well for the narrative stakes of the rest of the season. If the show can remain this focused and patient while still also indulging in its spastic brand of entertainment, then this might be the season that allows American Horror Story to be something more than critics’ favorite guilty pleasure.

Morgan Davis sells bootleg queso on the streets of Austin in order to fund Loser City. When he isn’t doing that, he plays drums for Denise and gets complimented and/or threatened by Austin’s musical community for stuff he writes at Ovrld, which he is the Managing Editor of.