You are here: Home / Features / Artificial Imagination: Is Nonplayer #2 Worth Four Years of Waiting? 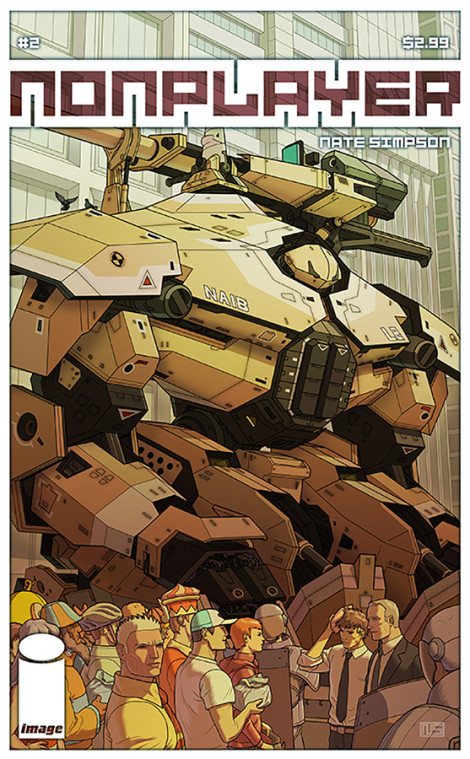 Woe is the massively delayed follow-up to a widely beloved debut. No one wants to toil for a half a decade only to reemerge with a second Second Coming. But comics seems relatively immune to that phenomena, doesn’t it? By my recknoning, the closest we’ve got is Big Numbers, though that’s really more of a “lost work,” so maybe the better example is Art Spiegelman and Maus, but fuck that guy. There’s also Dark Knight Strikes Again but a) that comic is better than you think it is and b) it may have been demanded but it wasn’t necessary, if anything it’s Miller’s fuck you to the very notion of sequels. Nate Simpson’s Nonplayer #2 by contrast is merely the second installment of a limited series, finally emerging after four years of bad luck and broken promises. The debut came out at a time when Image was still developing its rep, consistently churning out poorly selling cult hits like Casanova and Phonogram alongside the yet-to-be-adapted Walking Dead. Now, Simpson is putting out Nonplayer #2 to a far more Image-centric comics crowd than he met during the debut, many of whom are likely unaware of Nonplayer and its initial impact. So when one asks “Is it worth it?” about this long gestating follow-up, there are more complications to sift through than normal.

The first and perhaps most obvious complication is the context Nonplayer #2 arrives within in 2015 rather than 2011. A few months after Nonplayer #1 and its depiction of an MMO world so real you’d never want to leave it hit comic geekdom like a dirty bomb, Ernest Cline’s Ready Player One made its way up the bestseller’s list with a similar setting. Ready Player One has a clearer narrative thrust, pairing its too real MMO terrain with a quest for a digital Holy Grail of sorts; Cline’s writing is too dry and flat to match the vividness of Simpson’s art and imagination, still they cut into the same themes of digital escape and deceptively high corporate stakes. Two years later, Austin Grossman published You: A Novel, again centered on too real digital landscapes, this time with the added bonus of a developer ghost in the machine. Last year, Spike Jonze brought us Her, an anti-romance about a too smart AI and the man who stands in the way of her budding humanity because of his own selfishness. This year, Alex Garland flipped that script with Ex Machina, a Hitchockian thriller about another AI developer and his harem of digital brides. These are just the first examples coming to my mind, there are others that might be popping up in your head and of course there were other AI fantasies before Nonplayer, but I’d argue that its MMO element was a lot more novel four years ago.

Where the first issue of Nonplayer spent most of its time in Jarvath, the setting of the series’ MMO, the second issue digs into the real world and the political commentary around Jarvath and artificial intelligence on the whole, giving the comic a brief respite from comparisons to all those other AI works. Simpson makes the curious choice of grounding his fantastic art here, depicting a world that isn’t too unlike our own, cluttered and polluted and busy, hence the need to escape to Jarvath. There is a tease of an opener, as Jeph Homer, the co-creator of Jarvath, gets interviewed in game by a fan blogger whose avatar looks like a faerie but after an imaginative “tour” of Jarvath by Homer, the blogger asks a question about a controversy involving the consciousness of the game’s NPCs and the plot is set into motion. From there, Simpson moves into a different kind of story, turning Nonplayer into a sci-fi twist on CSI.

A rogue AI has taken over some dock machinery and is terrorizing a fishery, killing its employees and taking one hostage, issuing demands about the Pope while speaking in Latin. If that synopsis had you mouthing “what?” don’t worry, you’re not alone. It connects to a larger story about strife between humans and AIs but at this point it feels like a confused diversion, particularly since it’s rendered in the radioactive coloring of CSI as well, only with less cohesive action choreography. That CSI coloring is an absolute tragedy if you remember the lush palette the debut issue displayed:

Probably the most iconic moment from Nonplayer 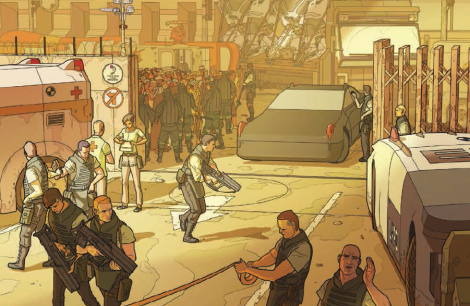 A standard scene from Nonplayer 2, now with less color.

Simpson does get in some good visual gags, like an Artifical Intelligence Bureau robot getting a swordfish thrown through its face and a mob of delivery drivers angrily demanding payment for their services after the AI called them en masse in order to delay the arrive of the authorities. But ultimately, it feels like an, ahem, cop out, an insertion of action oriented AI stories like Terminator and Robocop into what had previously been something dreamier. There are even vague mentions of an “Incident” involving AI rebellion, to further drive home the Skynet parallels.

The controversy surrounding Jarvath is a bit more interesting. The gist of it is that digital watchdog organizations are concerned that Jarvath’s NPCs are too well constructed and might actually have consciousness. That concern is well-founded and connects to strife between Homer and Jarvath’s co-creator Alan, the latter of whom has an ulterior motive for making super smart NPCs. If you guessed it’s because he wants to fuck one, well, congrats. The debut issue of Nonplayer admittedly had a paper thin plot but it was easy to look past that with Simpson’s breathtaking art, which fused the aesthetics of Moebius and Seth Fisher with Simpson’s video game background. Since the second issue is more focused on the narrative rather than world building, that saving grace isn’t as present. So the reveal of yet another “man builds AI in order to fuck it” story is especially discouraging, especially when you factor in who the AI Alan wants to fuck is.

Am I overly cynical? Maybe. It’s just disappointing that after a first issue that had such promise and left itself so much room to explore new terrain, Simpson chose to go the easy, sexist route. It makes me think of Shohei Imamura’s The Pornographers, a film about a man who runs a porn operation while masquerading as a more traditional business man to friends and family but also spends countless hours trying to create sexbots to sail away with. Imamura didn’t treat this obsession as something sexy or cool, it was a sad charade that simultaneously made the man’s loneliness abundantly clear and commented on our need to spend ridiculous amounts of time trying to find convenient ways to have sex. The thing is, that movie came out almost exactly fifty years ago. Nothing has changed. 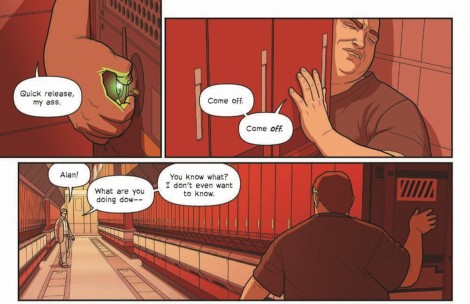 “Quick release,” get it?

I don’t know where I thought Nonplayer was going to go, all I know is that a plotline involving a sad caricature of a tech nerd building a robot version of an NPC he fancied wasn’t in mind. Simpson’s art has become similarly uninspired, full of a lot of odd perspectives and backgrounds that seem to have been imagined with efficiency in mind. Reading through the issue, I frequently asked myself whether Simpson had chosen to set this issue in the real world because that was actually how he wanted to tell the story or because it was a whole hell of a lot easier to draw than a sprawling fantasy land and if he kept it up maybe the next issue would come out in two years instead of four. A pretty big chunk of the issue is set in Homer’s office, looking out on a mass of servers, forming a perfect grid. Many of the panels are close-ups of characters’ faces, doing that Bendis trick of repeating a facial expression for several beats before showing a reaction. It’s lazy.

Lazy is honestly probably the term that sticks with me the most after reading this follow-up. Lazy like the goddamn cover just being a panel from the comic. Lazy like saying Alan the computer nerd needs to bathe. Lazy like Alan the computer nerd being the type of dude who would build a robot to fuck. I think about something like Her and I suddenly like it more, because it didn’t take an easy way out, even if it had a lot of the same beats and its own questionable sex plot. Ditto Ex Machina, which at least had the intelligence to tackle the sexism of AI fuckstories head on. Lazy also comes to mind when I watch others’ reactions to this comic. It’s all hyperbole, all happy consumption, surface level examinations of a story that has some horrible things to say about the geek mindset if you really dig in. The first issue of Nonplayer was a breath of fresh air, a work that deserves some of the credit for forcing people to take Image seriously as an alternative to Big Two comics. Four years later, its follow-up lacks the imagination that made us all anxiously wait for its arrival.