You are here: Home / Features / On the Road Yet Again: Big Significant Things is Bleak, But Not Bleak Enough to Say Something New

In writer and director Bryan Reisberg’s debut feature-length film Big Significant Things, successful twenty-six-year-old Craig, played by Game of Thrones’ Harry Lloyd–he was Viserys, of the golden crown–can’t bring himself to commit to the clear-cut future ahead of him. He has a nice job in advertising and is making a big move to San Francisco with longtime girlfriend, Allison. Despite being in their mid-Twenties in 2014, the couple is evidently comfortable enough financially to be house hunting in one of the least affordable places in America, so they must be doing pretty alright.

Yet when we meet Craig he is alone and nowhere near California. Through a series of phone calls made as he drives through America’s Deep South, we learn that Craig is pursuing a “classic” road trip adventure–alone, because his brother won’t cave to Craig’s indulgent, misguided nostalgia–having lied to Allison about a necessary last minute work trip with colleagues. She is left to find the house and to begin building a future with a man she trusts. The film never shows her. 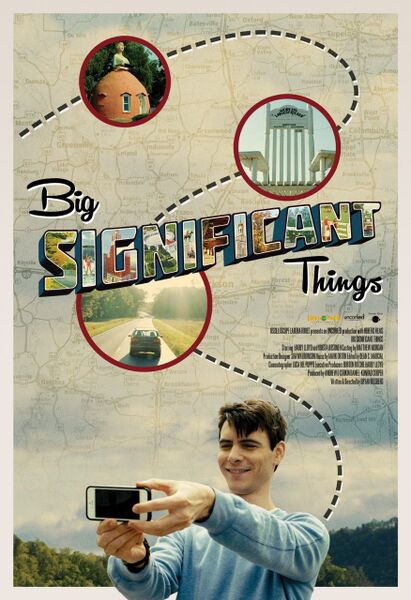 Craig’s goal is to revisit the quirky and “one-of-a-kind” landmarks–think “World’s Largest Cedar Bucket”–scattered across America that make this big ol’ land so great–and to hopefully revisit a younger version of himself that’s not so uncomfortable with stability, committed love, and financial success. The film’s goal, then, is to undermine Craig at every turn and to highlight the misguided nature of such fantasies, which are often only afforded to the very privileged, like Craig.

In the beginning, this concept plays out fairly successfully. As Craig, Harry Lloyd expresses a dogged, almost manic commitment to the adventure, and he comes off as earnest, creepy, and pathetic in equal measure. The audience might be charmed by his pestering inquiries to a local boy about the usage and history of the aforementioned bucket, but we quickly grow weary and unsettled by his behaviors. After stopping in a generic small town, he engages in an artificial, practiced attempt to befriend some local teenagers at a dingy motel by anticipating that they will want him to give them beer. It’s a strange and effective scene–he’s weird, yet has the charisma to pull off a whole act in order to get them to ask for his booze, and then his story. Still, it’s clear that he’s certainly no Don Draper.

It’s in this scene that the film does one of its best jobs undermining Craig’s (for lack of a better or more accurate word) stupidity. He’s trying to explain to the high schoolers from Nowheresville that they just don’t understand the complexity of grown-up relationships and grown-up unhappinesses, but right as he begins launching into the stereotypical “listless successful white guy makes analogies for why his great life is a disappointment” spiel–”Imagine that this beer is the best beer in the whole world, and you know it, and you’re lucky…”–the teens interrupt and gently mock him–”that beer’s shit!”–before completely changing the subject. Eventually, Craig even more pathetically agrees to hang out at a kid’s parents’ house, but is met by the rightfully judgemental and sketched out glare of the convenience store owner who knows exactly why Craig is purchasing all this cheap beer.

If only the rest of the movie grew from and built off of this scenario, instead of essentially repeating it less and less successfully. As Craig is continually hit by the reality, banality, and emptiness of down home, good-hearted, real America, he grows more erratic and frustrated, ditching his smartphone, convincing himself he hasn’t been guilted into buying a rocking chair, and grimly eating in roadside dives that he forces himself to be charmed by.

It’s bleak, but not nearly bleak enough, and when there’s hope for the final nail in the coffin–for him to be rebuffed by a mysterious small-town girl that he quickly builds into an idea of perfection–to signal some interesting consequences, the film backs down. The girl is drawn to him for no good reason, and does share his amazement for giant rocking chairs, and will make out with him at a sad house party even after learning that he’s lying to his girlfriend.

It’s not believable, and it’s a shame because after this infidelity, we aren’t even given the satisfaction of seeing the results of all of Craig’s ridiculous choices. We watch him cry and fall apart and try to reach out to those who simply cannot and will not help him with his unsolvable problems. And that’s it.

One of the basic necessities of plot is to have a character make choices or attempt to solve problems and to have the story play out the consequences of those choices. Seeing what happened after a character did what they did is where we as an audience can pull meaning from the events. What was the impact? How have things changed? In what significant ways are things still the same? Why was this story worth telling? Big Significant Things doesn’t allow us to dig into these questions and falls short when it comes to both plot and character development. It ends with Craig still alone, still on his trip, having told Allison nothing, and arguably no more miserable than when he started–just more visible in his misery.

By no means is a story of a dissatisfied and confused white male an original premise, but also by no means is it one incapable of shedding new light onto human behaviors and experiences. In the case of Big Significant Things, however, it’s difficult to parse not only what is being said, but what new is being said. In this way, the film could have pushed further.

Big Significant Things, directed by Bryan Reisberg and starring Harry Lloyd, will be in theaters and on Video On Demand on July 24th.

Kayleigh Hughes is an editor, freelance writer, and overthinker. In addition to contributing to Loser City, Kayleigh has written for Ovrld and xoJane. Talk to her about literally anything–she doesn’t have that many friends–on twitter or via email.