You are here: Home / Features / Carnage Park is a Photocopy of Better Genre Films 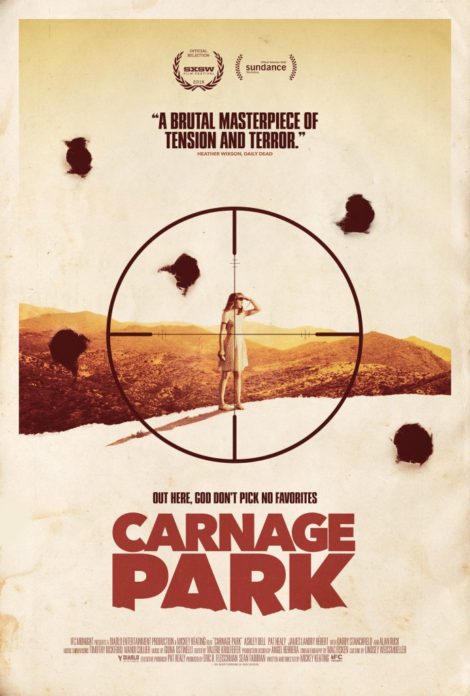 Quentin Tarantino and Robert Rodriguez’s Grindhouse films may have been commercial flops but it’s easy to see the lasting influence they’ve had on a certain branch of independent films. There are the obvious spin-offs of the project, like surprise blockbuster franchise Machete and the more unique and aesthetically focused Hobo with a Shotgun. But then there are also works like Mickey Keating’s new Carnage Park, which aim for grindhouse grit but lack the visual inventiveness to accomplish that in any meaningful way. They essentially function as photocopies of photocopies, riffing on the style and structure of Tarantino without having as deep of a knowledge of the films directors like him reference let alone the capacity to comment on those works the way he does.

The formula of Carnage Park is easy enough to break down. Take one part Reservoir Dogs and Pulp Fiction crime narrative, one part The Hills Have Eyes desert mayhem and one part Last House on the Left vengeance, sprinkle in some hallucinogenic imagery and sibling rivalry and half-bake. There’s nothing wrong with using better films as building blocks for your own work, but Carnage Park’s main drawback is how lazily it strings together these elements. Much of the heist narrative, for instance, is told in Tarantinoesque fragments, filling in some of the gaps of the intersecting stories of both robber Scorpion Joe (James Landry Hebert, doing a sloppy Matthew McConaughey impression) and his hostage Vivian (Ashley Bell, in a performance that will hopefully win her better roles). But these segments are so cliche and hacky it’s hard to care about them, particularly since nothing about the characters they feature are hard to figure out, even when Vivian is thrown into the titular park by her new abductor, an apocalyptic sniper named Wyatt (Pat Healy).

This segues into a larger question about framing. Why is a generic bank robber’s story fleshed out in immense detail while Pat Healy’s crazed sniper/carnage craving park ranger is given nearly no background? If Keating trusts that the mystery of Wyatt will be alluring to fans, why does he not extend that same trust to the viewer not needing to know full backstories for disposable characters? When a story element is clearly in play only because the director wanted to dabble in multiple genres at once, it’s hard to stay interested in that element.

That aspect is even more frustrating considering Healy and Bell’s chemistry is the sole redeeming feature of the film. Bell is never portrayed as a weak victim, she’s simply in multiple bad situations and is doing her damnedest to get out of all of them. Healy portrays Wyatt as cruel and vicious, but also respectful of this component of his prey, which makes the inevitable hunter-becoming-the-hunted plot point all the more believable and tense. Before Vivian shows up, you get the sense that Wyatt had become bored by how pathetic his victims (mostly schlubby men) had become. A wasted performance by Ferris Bueller costar Alan Ruck as Wyatt’s sheriff brother even hints at a sort of conspiracy between serial killer and police, but this is mostly dealt with via exposition rather than through flashbacks.

The film’s greatest crime against its genre, though, is its climax, which appears to have been constructed around budget limitations rather than in spite of them. It’s here that Keating’s lack of aesthetic understanding of his subjects come into play, and what could have been a brutal, vivid showdown is reduced to a whole lot of recycled spaces and murky darkness that obscures the action. Most of the film makes decent use of its desert environment, creating parallels between the threat Wyatt poses as well as the natural threats of the ecosystem, and then the rushed ending undoes any of the goodwill created by that environmental angle, forcing the viewer to feel like they’re watching a movie that ran out of money two thirds of the way through. 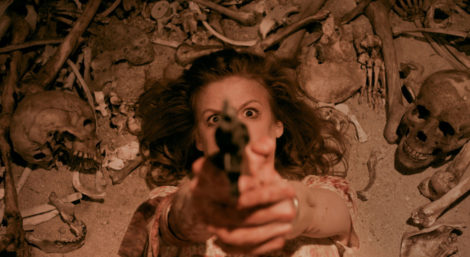 The best genre films entertain you and surprise you with their economy and imagination. These films see a lack of a budget as a challenge and rise to the occasion, creating imagery that endures and inspires. If Carnage Park inspires anyone, it would be in the “I could do better than this” way.

Carnage Park is currently screening in select theatres and is available on VOD from IFC Films.

Morgan Davis sells bootleg queso on the streets of Austin in order to fund Loser City. When he isn’t doing that, he gets complimented and/or threatened by Austin’s musical community for stuff he writes at Ovrld, which he is the Managing Editor of.