You are here: Home / Features / DC REBIRTH: Judge A Cover Not, Lest Ye Be Judged

For Rebirth (a relaunch that Geoff Johns, Chief Creative Officer of DC Comics, describes as an attempt to “give back [a] sense of hope and optimism” to their output), DC Comics plans to release a series of one-shot specials for most of their ongoing books that begin launching this June. The edict for the covers of these books is to consist of a close-up of the hero or heroes featured in the title. Initially I was underwhelmed when I heard this at the DC Rebirth press conference and started to see the covers appear onscreen during the presentation. I viewed that directive as limiting to the assigned cover artists but became interested in the artistic exercise of attempting to make certain iconic characters recognizable without the benefit of their silhouette. Without seeing a costume, there’s not a whole lot to distinguish Wonder Woman and Donna Troy from each other or just about any other white lady with dark hair and blue eyes in superhero comics.

The Rebirth covers, for the most part, have been uninspired. The intent is clear: to tell readers who the protagonist of a book is while also trying to strip them down to focus on their iconic nature. The former is, of course, something the design of the font in the title does a more bang-up job of getting across than the cover for Wonder Woman: Rebirth #1 and the original cover for Titans: Rebirth #1. Wonder Woman is made somewhat recognizable by the sword awkwardly held in front of her face (I’d love to see a full-body shot of that pose in profile) and the star on her tiara but it’s otherwise nondescript due to the historically skimpy nature of her costume. The Titans cover features Donna Troy, a character who could safely be identified as not being iconic, in an action pose and a slight smirk that’s not in much danger of being confused for a smile. 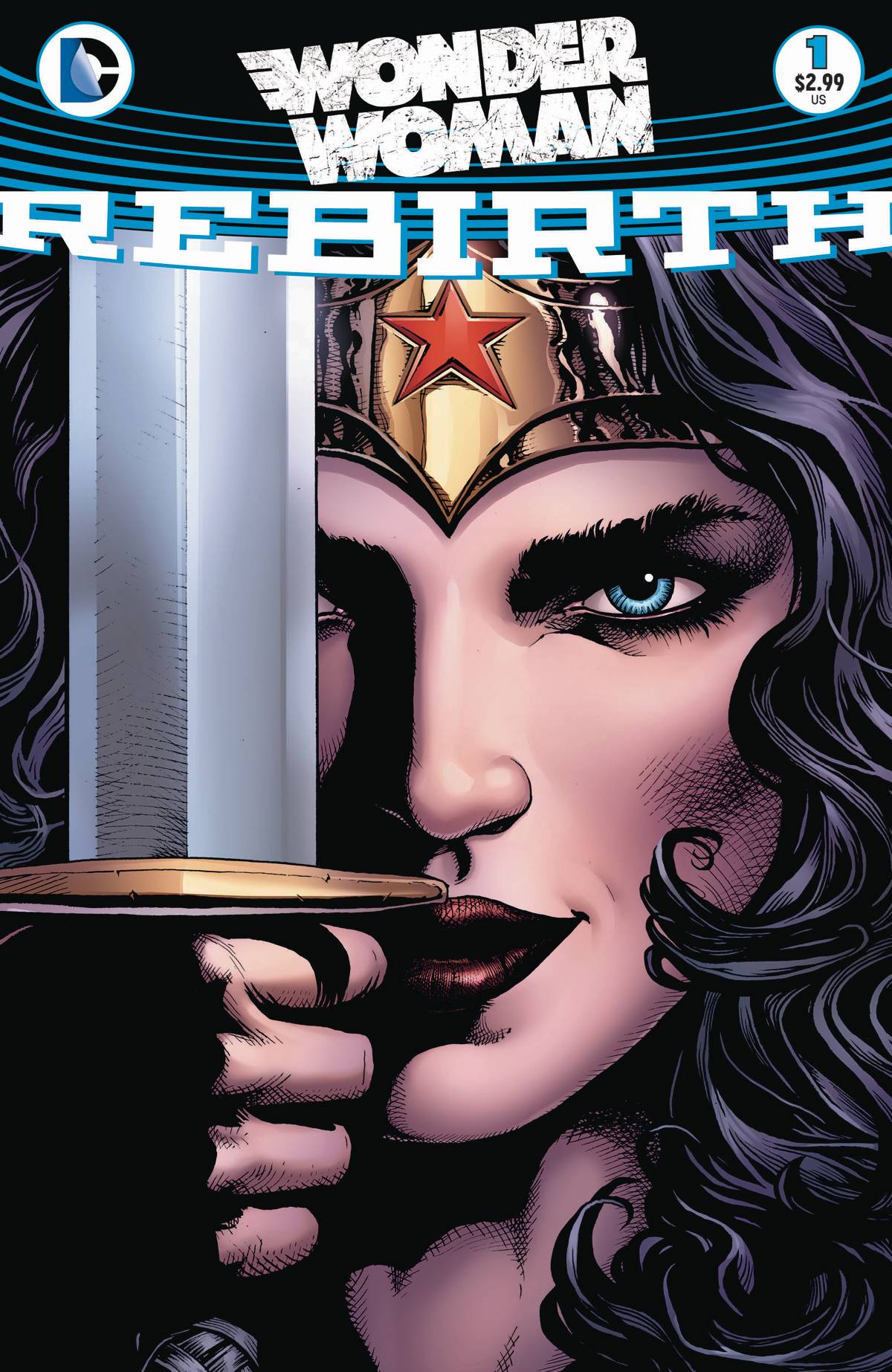 Without the title, the Titans cover would not be immediately identifiable as a Titans book on the shelf. If someone looks closely enough, though, they’ll see Titans mainstays Nightwing and Tempest reflected in Donna Troy’s wrist guard. It’s a total cheat on cover artist Brett Booth’s part in order to get around the confines of the close-up mandate and deliver some recognizable costumes but it’s not a particularly effective cheat either as the two male figures are colored in a way that almost encourages the eye to focus solely on Donna. Here’s some good news for you, though: that’s not the real cover. But the bad news is that the real one is just as bad.

The actual cover to Titans: Rebirth #1 features Wally West wearing a cocky smile and his new, yet-to-debut-on-the-page costume with arm reaching out towards the reader. Over his shoulder in the background are the other Titans who, as they did on the decoy cover, serve as an ineffectual jab at making the book identifiable. The insertion of other Titans on both covers makes a deal of sense as focusing on Nightwing wouldn’t be possible because it might cause readers to mistake this book for his separate title and characters chosen for close-ups have new costumes that aren’t immediately identifiable. 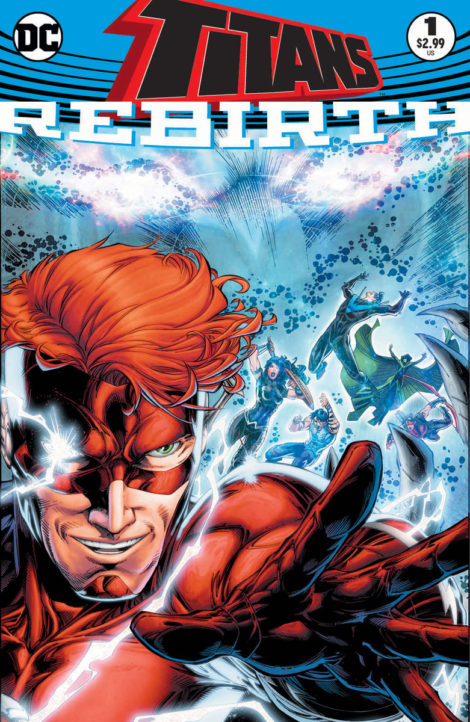 These covers aren’t intended to convey the plot content of their books (something I consider a feature more than a flaw considering the messaging of the relaunch) so much as their tone and interpretation of the character. The Wonder Woman cover doesn’t say much at a glance except “here’s a woman with a sword that she’ll probably be using” which is certainly a message that has led to discussions by the character’s fans and historians over the years about packaging an icon of femininity as a violent warrior. This interpretation of Wonder Woman is going to use a sword and, if you look closer and recognize the slight smirk that puts a button on her “come at me” pose, might just enjoy using it. It might not say much but it says something.

In contrast, the Titans covers don’t say much of anything. Donna Troy’s action pose suggests that she’s in combat but the reflection in her wrist guard is of her teammates standing in heroic, non-action poses. A reflection in a hero’s costume gear would seem to indicate an opponent so the immediate messaging of this cover might be that she is in conflict with her teammates. Again, the poses of Nightwing and Tempest tell a conflicting story leaving the cover a confused message. The cover with Wally West falls along similar lines. His pose with arm stretched might normally indicate that he’s looking for help or issuing a warning but it doesn’t match the smile on his face. His teammates behind him are in some sort of energy field reacting in pain and at the top of cover is an almost unidentifiable pair of eyes belonging to a vague face that I wouldn’t have identified while glancing over a shelf of new comics.

Some characters are more easily identifiable. 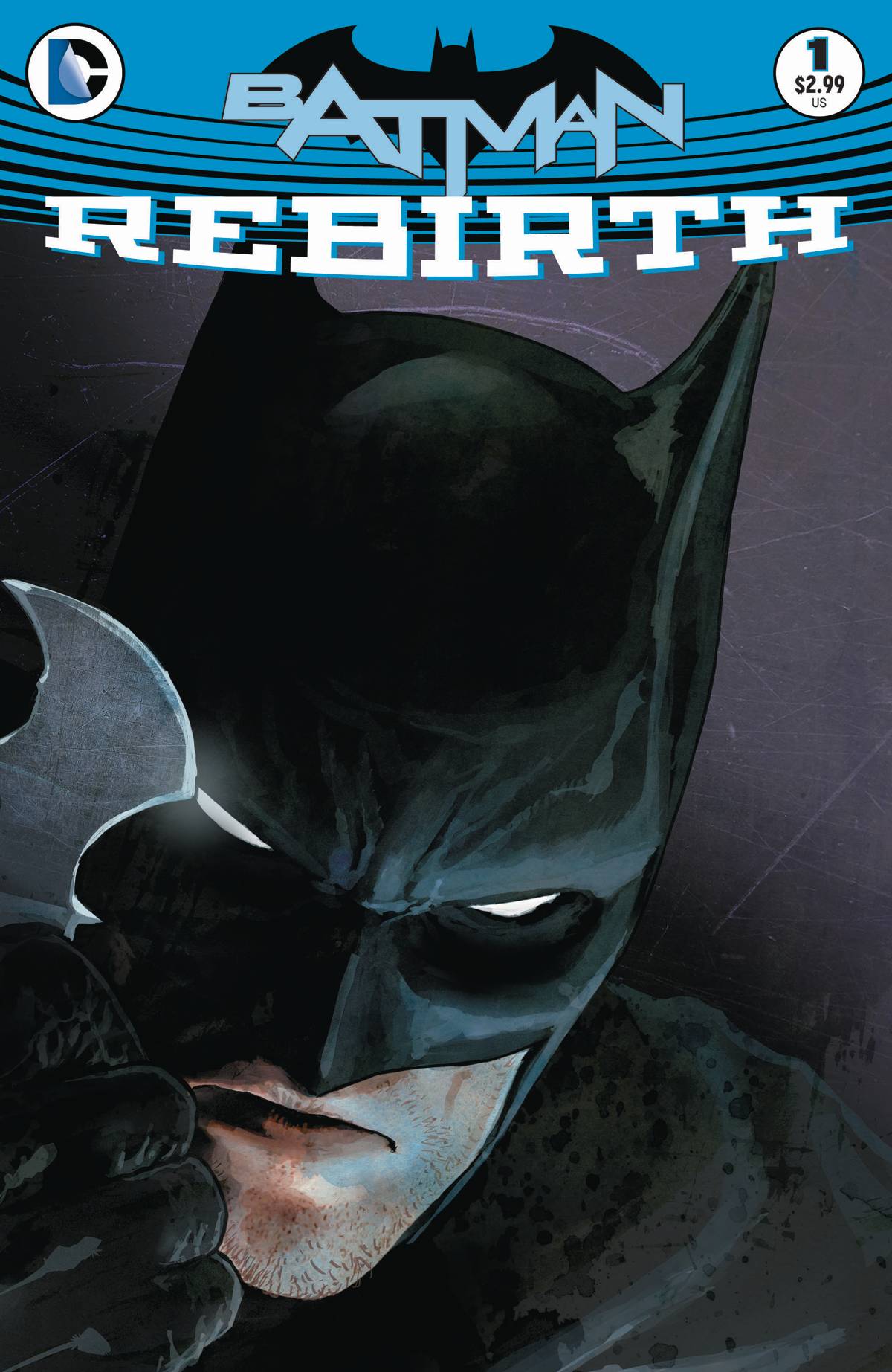 Batman: Rebirth throws in a batarang being held up in a way that suggests it’s ready to be used while the shadows and scruff on Batman’s face hint at a dark tone that’s certainly in line with a prevalent approach to the character. The Superman: Rebirth cover shows the character flying towards the reader so the cape and the shield on his chest (a logo that is fighting neck and neck with the cross and Mickey Mouse for Most Recognizable Thing in the World) are visible. The red eyes from heat vision are a touch superfluous when it comes to making the character identifiable and they, along with a grimly determined look on Superman’s face, conflict with both a general tone of the character and the goals of the relaunch. Rebirth has been sold in part as a return to superheroes smiling and Superman is a character whose writers/artists often receive criticisms for portraying him grimly so the cover stands out as an odd choice.

The best cover of the bunch, though, goes to Aquaman: Rebirth #1 by Brad Walker and Andrew Hennessy.

The blonde hair, orange top, green gloves, and trident are all there to make the character immediately identifiable. It helps that the colors all just absolutely pop off the page together. A longer look reveals an A-shape created on the trident where the shaft meets the fork, fish swimming above and below the character’s head, and air bubbles. The fish and bubbles are important elements, too, as they both reveal location and the latter adds more variety to the image to keep the background from being a solid, uninterrupted color. The cover renders the character identifiable and also manages to tell a story that indicates a possible tone for the book and interpretation of the character. Aquaman is in a reactionary action pose with his head turned to look over his shoulder with an angry expression featuring a clenched jaw, furrowed brow, and icy glare. The story being told here is that someone or something has attacked Aquaman, he’s not happy about it, and he’s gearing up to kick their ass. The character is presented as embattled and wrathful. The cover simply hits all the marks the Rebirth one-shot covers are meant to even if it runs counter to the larger messaging of the initiative. 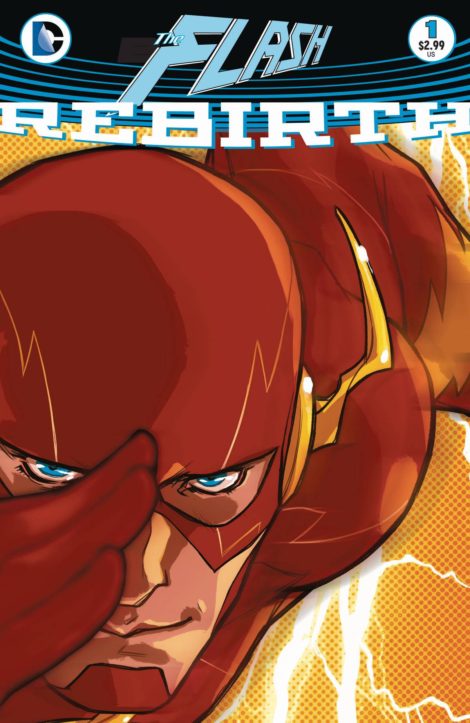 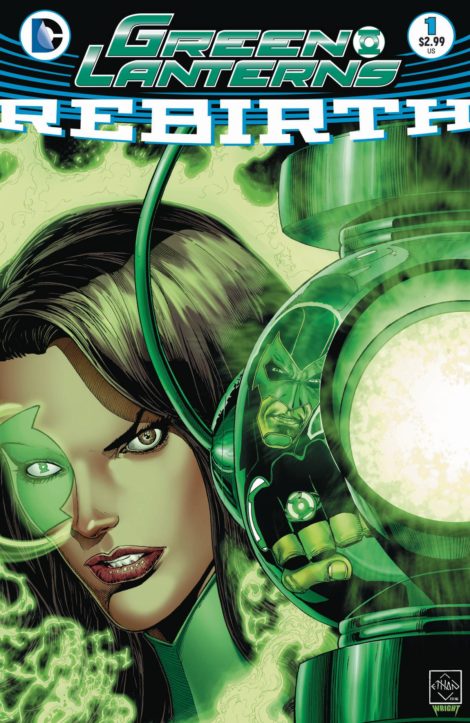 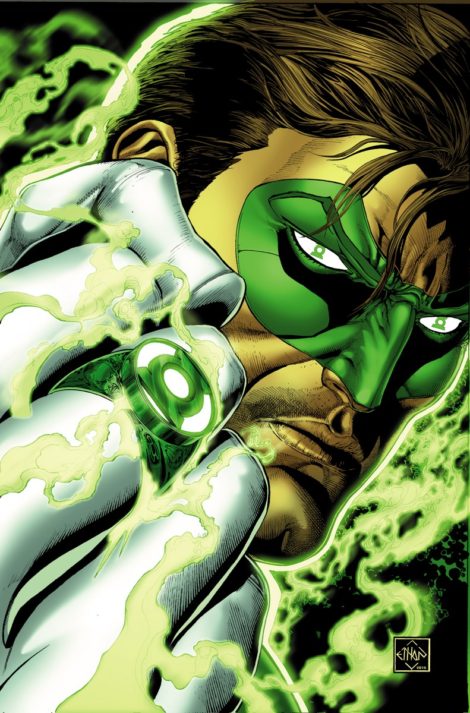 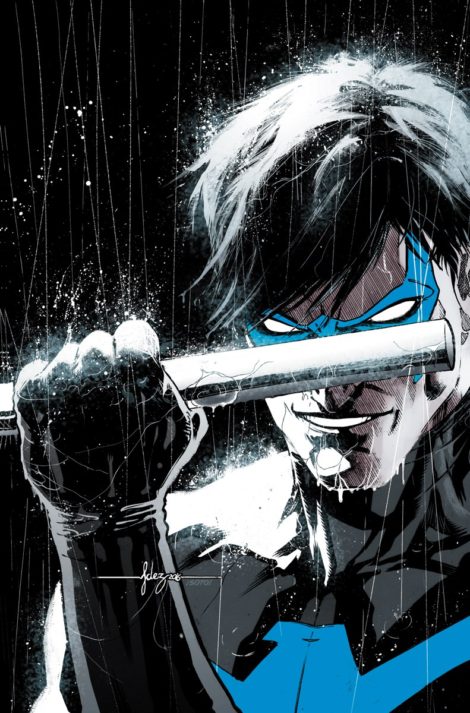 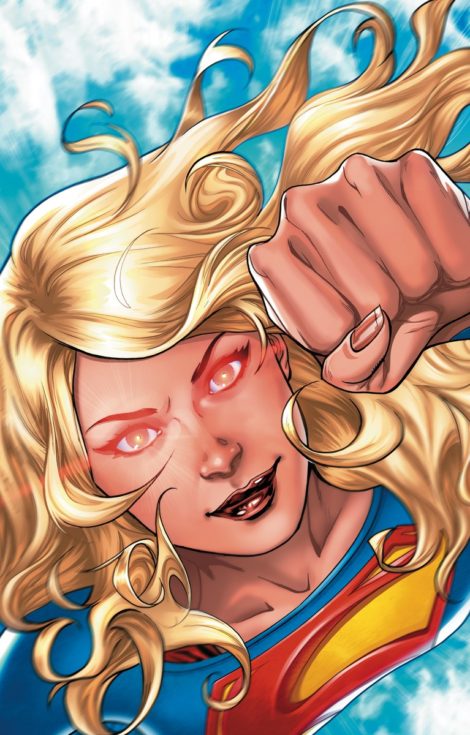 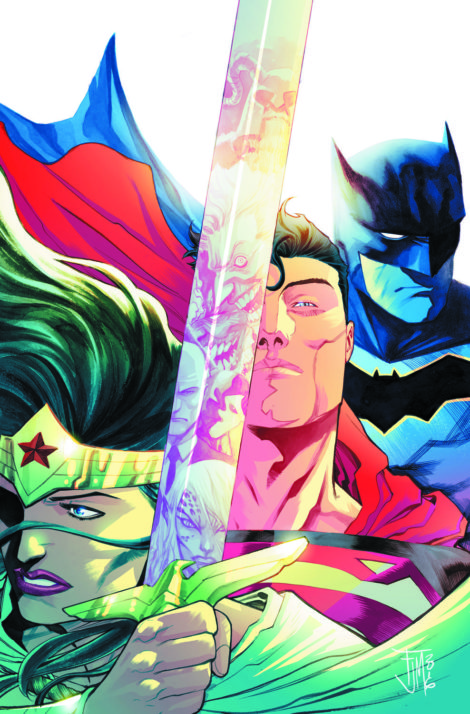 Art by Will Conrad 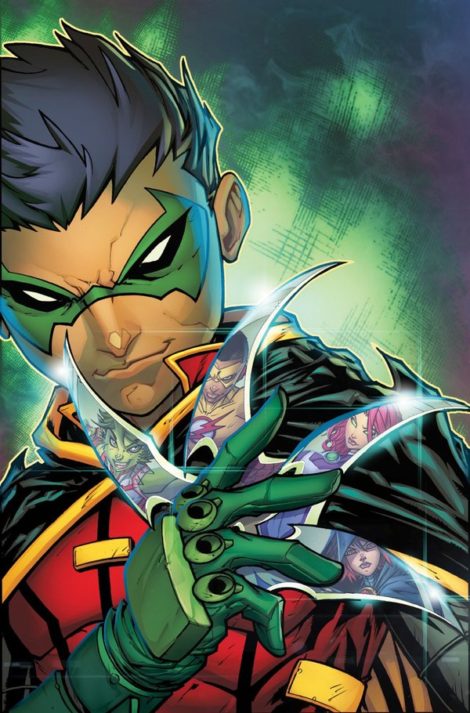 These covers are by and large tonally confused and inconsistent in their messaging of the intent of the Rebirth relaunch and rebranding. The Green Arrow: Rebirth cover stands out for no other reason than its obvious aping (or homaging if you’re nice) of the cover to Green Arrow (vol. 3) #1 and a widely circulated Arrow poster. Frowns and otherwise grim faces remain on covers that otherwise effectively present a character quite well. The promise of a return to optimism may bear out in the interiors but it remains largely missing from the artwork designed specifically to sell them.

Cursed with immortal youth and crowned King Baby by his legion of adoring fans, Mark Stack’s only comfort is that he loves comics more than anything. Heck, all of his English teachers have known it too, whether it was from him writing an analysis of dystopian themes in media using V for Vendetta or drawing a comparison in class from the serialized works of Charles Dickens to the comic book. Mark, desperate to stop a future where San Diego has sunk beneath the Pacific Ocean due to some King Baby prophecy, fled to the more humid climes of South Carolina but has now returned to delay the inevitable. You can read his work at Comics Bulletin, Eat.Geek.Play and more. He’s on Twitter at @MarkOStack