You are here: Home / Features / Deathgasm is the Heavy Metal Cover of Evil Dead You Never Knew You Wanted 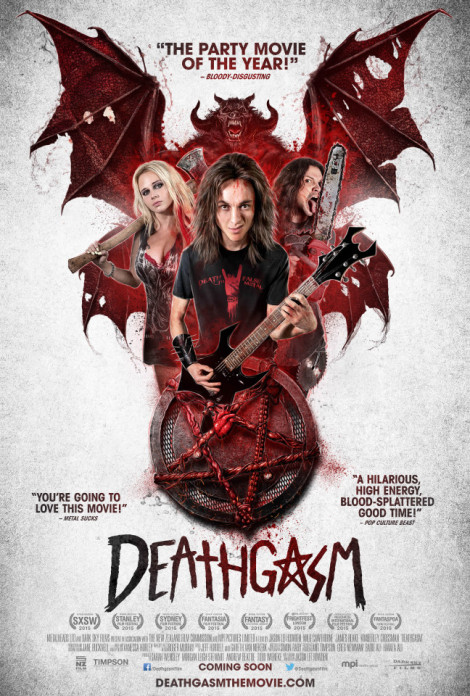 When will we as a culture collectively agree to retire Evil Dead as the most homaged low budget horror film? My vote goes for this year, now that New Zealand has returned to the Evil Dead well once more with Deathgasm, a mostly lovable film that basically gives Sam Raimi’s frequently revisited classic a Kiwi Metal Makeover. It’s not that Deathgasm is bad, it’s just that its predecessor Dead Alive already felt like an overdose of Raimi Fever and yet here we are again. Deathgasm ramps up the gore, make-up effects and heart of Dead Alive, so why not go out with a devil horns bang and move on to, I don’t know, Suspiria as our template for low budget horror tributes?

What saves Deathgasm from being as tired of an homage as other Raimi wannabes is that has a unique focus, with its first half functioning as a basically straightforward, comedic twist on the “fish out of water” cliche. Brodie (Milo Cawthorne) is a high school metalhead who is sent to live with his super Christian relatives in the small New Zealand town of Gradepoint, where he gets pummeled on a daily basis by his lughead cousin and is forced to hang out with two especially pathetic nerds. That is, until he encounters Zakk (James Blake), the only other metalhead in the vicinity, who he instantly forges a literal blood bond with. Brodie is basically a harmless sweetheart (pretty common amongst metalheads, in my experience) but Zakk is the kind of friend who is “chaotic neutral,” to quote another character, and it doesn’t take long for the pair to get into epic trouble. After breaking into the rumored hideout of a heavy metal legend, the pair discover a cursed sheet of music which they then of course play, only to realize its resulting Black Hymn has turned their entire town into blood crazed eyeless demons.

It’s at this point that the film really comes into its own, the pace picking up as the demonic kills get grosser and more slapstick. That Dead Alive connection isn’t something I bring up as a name drop, director Jason Lei Howden actually works for Peter Jackson’s Weta Digital and the influence of Jackson is as apparent as the influence of Raimi. Deathgasm manages to stand out from its peers utilizing a similarly goofy tone because of Howden’s impressive effects– the demons here aren’t your garden variety red skinned goatmen, they’re eyeless monstrosities that look like the progeny of Jackson’s Lord of the Rings orcs and extras from Pan’s Labyrinth. The unique visuals and the metal dress elevate Deathgasm above most other films that try to recreate the magic of Dead Alive, but Howden also makes the wise choice of maximizing his visual space, avoiding the claustrophobic corners of Raimi and the condensed suburban stretches of early Jackson. Seemingly all of Gradepoint is put to use, as the characters experience comedic and horrifying encounters with demons everywhere from the classroom to a car garage to quiet homes.

Even with those criticisms in mind, Deathgasm is unquestionably fun, with a clear love for the source material that inspired it and for the subculture that gives it its flavor. Outside of Metalocalypse, there are few rivals to Deathgasm’s goal of being the essential metal horror work and Jason Lei Howden’s inspired direction marks him as the most likely successor to Peter Jackson to come along in ages.

Deathgasm is in select theatres starting today, October 2nd. Check the film’s site for local listing or to order VOD.

Morgan Davis sells bootleg queso on the streets of Austin in order to fund Loser City. When he isn’t doing that, he gets complimented and/or threatened by Austin’s musical community for stuff he writes at Ovrld, which he is the Managing Editor of.