I suspect vampires have dwindled in popularity versus their more durable zombie peers because film and television started portraying them solely as morose romantics. It’s not just that vampires stopped being scary, it’s that they stopped being interesting. Zombies sidestep this because they’re never really the focus of the stories that feature them; no one tunes in to The Walking Dead wondering what’s new in the zombie community. But the best vampire stories put their monsters front and center as simultaneously fearsome and charismatic objects, figures we can’t help but be drawn to. Madeline McGrane clearly understands the appeal of vampires, the night fiends loom large throughout her work, wreaking havoc on the lives of mortals as they indulge in their blood lust. And Dirt Creek Runs with Blood is her magnum opus, a love letter to bloodsuckers and an attempt to revitalize the character with danger and sass.

Dirt Creek Runs with Blood began as McGrane’s senior project but it’s remarkably confident and self-assured. McGrane’s passion for the subject obviously aids in that, as her understanding of vampire tropes and history is breezily communicated in every panel. But Dirt Creek isn’t bogged down with history or made shallow by ceaseless references, it’s a wholly unique work that adds to the canon as much as it nods to it. You can see this in the comic’s introductory sequence, where our vampire anti-heroine Sarepta intrudes on city life, feasting on debutantes and handsy men before being inspired to “Go West” and seek new experiences before police figure out the true mystery behind the “mystery killer” they’re tracking.

This early stretch of Dirt Creek is wordless, the first two pages setting up kills, the next few detailing Sarepta’s travels. McGrane doesn’t bother with an origin story for Sarepta, nor does she bother with any handwringing over her activities. There is no internal monologue giving us a glimpse at her motivations, she is simply a bold hunter bored by humanity. McGrane doesn’t really explain Sarepta’s interest in the West, because she doesn’t have to. Prior to her arrival in some dingy frontier town, Sarepta’s expressions range from hungry to annoyed to bored; the West, with all its murder and mayhem, likely appeals to Sarepta as a place where her prey will entertain her when they aren’t being consumed. For a vampire with no weakness to sunlight to be concerned about, it’s not difficult to discern why the Wild West would be worth exploring over, say, Alaska.

This isn’t to say McGrane doesn’t also give the reader some natural beauty to enjoy along with the murder and mayhem, though. One of Dirt Creek’s most effective sequences follows Sarepta after she cuts her hair short and runs through the hills, her pink dress and stark white paleness standing out beautifully from the flat green expanse and the grey-blue sky. McGrane’s character designs are minimalist but striking, her use of simple coloring for the backgrounds driving the eye towards the signature traits of the characters, particularly Sarepta’s sharp teeth, which she puts no effort whatsoever into hiding. 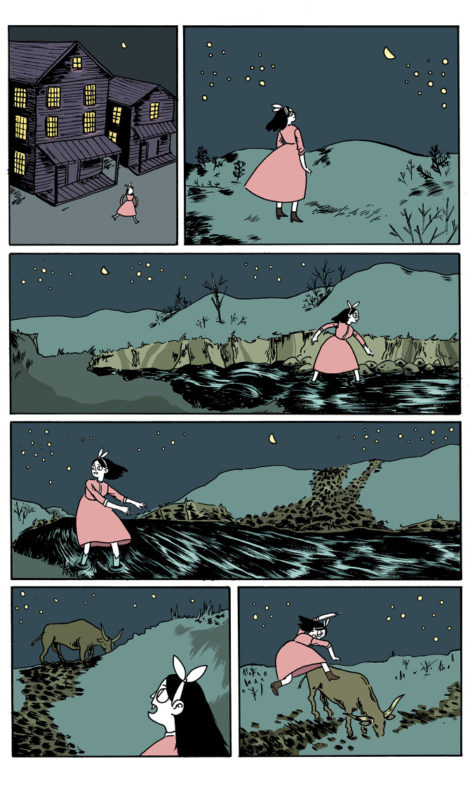 McGrane’s work is similar to Katie Skelly’s on this front, but her whimsy and tone also recall Kerascoet’s aesthetic, specifically Miss Don’t Touch Me. McGrane’s use of shadows and the surprising depth of field she brings to her minimalist style makes her a perfect fit for vampire stories, while the unexpected humor and lightness proves she has an impressive range fit for any number of other genres. This becomes clearer when Dirt Creek shifts to a Western noir subplot, as Sarepta attempts to warn Ines, one of the fearsome Cabrera Sisters, of a backstabbing plot masterminded by her own sister.

Where Sarepta is a natural survivor, bold but always aware of her surroundings, Ines is cocky and impetous, unafraid of danger but reckless. Still, it’s easy to see why Sarepta is drawn to Ines: they’re both unwilling to let anything get in the way of their desires, and they don’t hesitate to take down anyone who gets in their way. And given Sarepta’s well-established boredom, it was only a matter of time before she found herself a partner-in-crime, so why not a hotshot desperado?

Dirt Creek Runs with Blood is so fleet and engaging that by the time it reaches its conclusion, it feels like the story has only just started. So it’s a relief to hear that McGrane has finished up a second part and will soon be releasing it. Dirt Creek Runs with Blood is a welcome breath of fresh air in the vampire genre, showcasing the potency of an approach that emphasizes the hunger and eagerness for excitement of the vampire. But it’s also a remarkable introduction to an artist with immense talent and charisma.

You can read Dirt Creek Runs with Blood here and keep an eye on Madeline McGrane’s Big Cartel page for info on new prints of the comic.