You are here: Home / Features / Locked Away in the 6: Drake and the Desperate Excellence of If You’re Reading This It’s Too Late

In 2006, Kanye West appeared on the cover of Rolling Stone wearing a crown of thorns. Apart from its place in the narrative of Kanye as a famous person who does things that offend people, and the blasphemy that certainly made a lot of middle American grocery-store shoppers nervous as they perused the magazine aisle, the cover is an important epoch on Kanye’s myth making, cementing one of his most important early archetypes: Kanye the Suffering Rapper, persecuted by the haters and stuck in his own head, bleeding onto the beats. It’s nine years later and Kanye is married and has a kid, and he is pitching his follow-up to Yeezus as backyard barbecue music. He’s a lot of things nowadays, and still all about the offending people (Beck fans, anyways), but Suffering Rapper he ain’t. No, that mantle nowadays falls to Drake, and, if he decided he didn’t want to go with the MS Paint minimalism of the current art, photoshopping his face on that Rolling Stone cover would be suitable for a re-issue of his surprise mixtape, If You’re Reading This It’s Too Late. 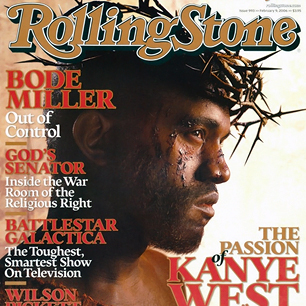 By now, Drake is pretty used to playing the Suffering Rapper. He’s been rap’s go-to sad sack since at least 2011’s Take Care, though I think he might have come under Li’l Wayne’s wing with the persona already fully developed. So in that vein, this new release, dropped a couple of weeks ago with no build-up, the result of a planned free mixtape release intervened disrupted by Cash Money, is more of the same. He bemoans lost loves and rising enemies, scowling and boasting at a harsh world in turn. It feels different this time, though. Drake’s melodic R&B side is almost entirely absent here, as is his long-time collaborator, Noah “40” Shebib, and in their absence Drake’s angst moves in a harder, darker direction. It’s an unsettled-feeling mixtape, with Drake sounding hungrier and more desperate than he has in years, maybe ever. If You’re Reading This It’s Too Late is a portrait of a powerful artist teetering close to the breaking point, reaching to the outward bounds of his creativity and his patience. And it’s excellent.

“I got a lot of enemies,” Drake spits on “Energy,” bemoaning the drain of constant strife. Elsewhere, he complains about all the things threatening to suck life out of him, including loneliness, self-consciousness, and the constant need to look your shoulder. This is Drake in his persona as 6 God, unlikely hip hop king of Toronto, standing astride his kingdom from a loft in the top floor. “Drape’s closed, I don’t know what time it is,” he reflects on “10 Bands.” “I’m still awake, I gotta shine this year.” It’s this pressure, I think, that ties the rest together—the pressure to create, to constantly be putting out the best, most interesting, most intimate work you can make, lest someone come up behind you and take your place. And since Drake is convinced he’s on top (and with good reason), that pressure is magnified and pushed into every line of his work here. He’s always looking down, and it’s a long fucking drop.

I don’t think we ever leave that loft, locked inside it with Drake for the entirety of If You’re Reading This’s running time, tracing every corner of it, probing Graham’s mind from every angle as he pushes himself to put out something worthwhile. That explains the experimentation here: Drake is trying to find out what he can do, and what’s going to work. And most of it does. His flow is sharp and consistent, oscillating between his normal matter-of-fact delivery and more stylized, playful, heavily rhymed and enjambed verses. You can see where he’s straining—his fastest delivery here seems to be the fastest he can deliver, and the mannered delivery on “Used To” feels just a little too mannered—but it still mostly works, sometimes paying off in spades, like in the pushed, bitter flow of “6 Man.” The production isn’t entirely new for Drake, still leaning on scratchy, light beats and stylized nightclub sludge R&B sounds, but the production consistency does a fantastic job of sustaining mood without feeling sluggish, and the throughline with Drake’s previous works is welcome. The mood is further bolstered by this being a mostly solo affair, lacking the bevy of guests that have characterized Drake’s studio albums, with only a couple of supporting characters here alongside the obligatory Weezy appearance that, as is increasingly the case nowadays, is lackluster at best, more tragedy than dynasty.

Even with the welcome shake-ups, this is still Drake, though, for better and worse. Like all his albums, this release runs a little overlong, and some of the tracks could easily have been cut away (“Wednesday Night Interlude” in particular feels particularly superfluous to me, adding little and distinguishing itself not at all). And Drake is still a figure with a large amount of inconsistencies and contradictions, simultaneously bombastic and terrified, both deadly serious and impossible to take seriously (bringing a Beretta into the Cash Money office on “Star67?” Aubrey Graham, what would your mother think?). If those contradictions don’t impress you, this music isn’t going to change that. But I think those contradictions are incredibly fruitful, and create the best moments in the album, such as the aforementioned “Star67,” which begins channeling Drake’s frustration at his label and somehow morphs into a dirge in the course of the next four minutes.

The standout, though, is the late-album experiment “You & the 6,” which uses the conceit of a phone call with Drake’s mother to give him a chance to be as earnest, proud, and desperate as he needs to be, distilling all his ambitions and contradictions into a series of frustrated pleas. “I’m Game of Thrones with it, Momma, I’m Home Alone with it, Momma, I’m—” He pauses. “I really hate using this tone with you, Momma.”  I believe that. If You’re Reading This It’s Too Late isn’t a mixtape that sounds like it was fun to write. It’s all angst and bravado, sweat and hate. Listening to it, though, is something close to catharsis.

If You’re Reading This It’s Too Late is available on iTunes, Amazon, etc, everywhere, dude, it’s Drake, you know where to buy this.

Jake Muncy is a freelance writer, editor, and poet living in Austin, TX. In addition to functioning as Loser City’s Games Editor, his writing appears on The AV Club, Ovrld, and anywhere else he can convince people to post it. You can contact him by email or twitter, where he tweets regularly about video games, the Mountain Goats, and sandwiches. He has very strong feelings about Kanye West. And also Drake, apparently.