You are here: Home / Features / Eat the Rich: Renato Jones: The One% isn’t as Edgy as it Thinks it is 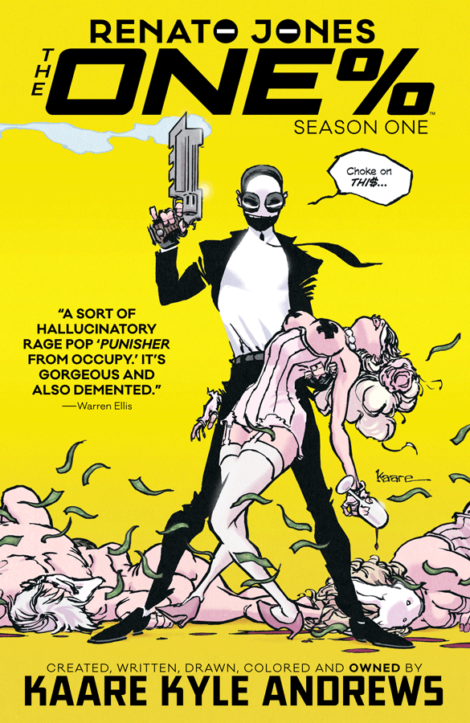 All throughout Kaare Andrews’ Renato Jones: The One% are flashback sequences made to look “old” through the use of color halftone effects and old paper textures. It’s digitally crafted nostalgia, achieved effortlessly and with little thought, simply dialed in as needed, which is fitting considering Renato Jones itself is more or less the same. An artless hodge podge of Frank Miller habits from Sin City shadowing and disturbing gender politics to Dark Knight Returns’ hamfisted explorations of classism and corruption, Renato Jones thinks it’s on the level of those beloved series when really it’s the Bernie Bro equivalent of Holy Terror, all embarrassing politic with no chill or nuance, an impotent jerk off motion towards the faces of interchangeable big business stereotypes and idle playboys.

Like a latter day Rage Against the Machine album, Renato Jones mistakes buzzword fueled macho posturing for astute political discource. Its titular hero is a cardboard Bruce Wayne cutout, with the twist that he’s not actually an orphaned billionaire son of elites but a street urchin who happens to look like the real and really dead Renato Jones and has been groomed by an Alfred stand-in named Church to infiltrate the 1% who control most of the world’s wealth using that identity. Unlike Batman, Renato Jones absolutely does kill and in exceedingly brutal, gratuitous ways, putting him closer to Sin City-level violence than Miller’s work on Daredevil and Batman. 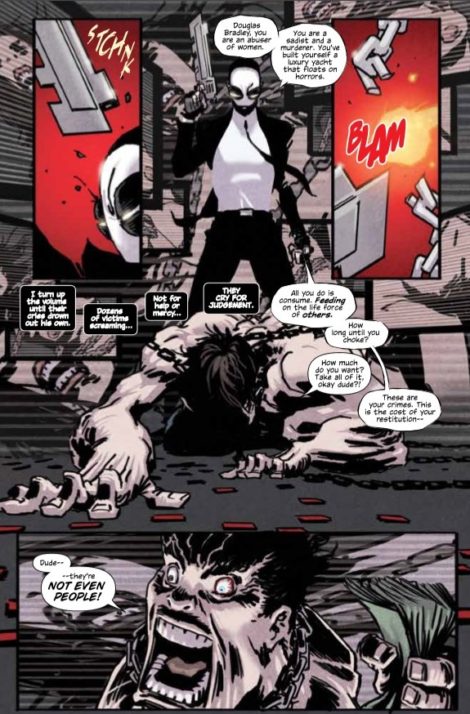 Jones uses the identity of “The Freelancer” (because, as one villain says, “freelancer is simply a name we use to avoid paying benefits”) and wears a suit and a mask, making him an exceptionally bland and anonymous anti-hero. That Andrews almost certainly intended that identy to be anonymous (get it?) doesn’t really make it any more interesting or remarkable, and that generic “fuck you!” attitude clouds the work to the extent that it never really stands out or commands attention no matter how hard it tries.

Take the first mission we see The Freelancer embark on, where as Renato Jones he infiltrates a giant ship an absurdly rich sadist named Douglas Bradley owns. Bradley’s defining characteristic outside of his homemade snuff film collection is his overuse of the word “dude.” That’s it. Later, The Freelancer’s archnemesis (one of two Trump analogues in this comic, complete with a presidential run centering on the phrase Make America Hate Again) hires a killer named “Wicked Awesome” to pursue The Freelancer. Wicked Awesome’s defining characteristics are that he says “wicked awesome” a lot and that he also likes to say “I’m such a dick.” Lather. Rinse. Repeat.

Andrews’ shallow characterization extends beyond the villains of the book and to every single woman character. The women who aren’t immediately killed (which is the vast majority of the women in the comic) are either crazed sexpots, cartoonishly greedy psychopaths or generic damsels in distress with no identifiable traits others than their need to be “saved.” These women’s motivations are limited to either lust or a need for economic stability, they have no other desires whatsoever. Characters of color don’t fare any better, they’re limited to stock villain extras or corpses.

And though Andrews’ style is presented as groundbreaking and novel, it’s just as superficial even beyond its clear debt to Miller. The storytelling in Renato Jones is flat and uninspired, built chiefly around cheap splashes and blocky silhouettes that are meant to look “cool” but lose any spark they might have had the fiftieth time you’re forced to endure them in any given issue. Andrews lacks patience as a storyteller and doesn’t want to put the time into developing characters in a way that makes their decisions carry weight, so he expects you to just be content with the intense style over substance you’re assaulted with at every turn.

There’s a Warren Ellis quote on the cover, though, so it’s clear that Andrews and Image know that there’s a sizable audience out there for readers who just can’t help but love a snarky, violent man dressed in white. But you deserve better. So much better. Comics began life as vehicles for messages aimed directly at the poor and disenfranchised, the entire medium is built around symbolism and visual communication and even in the simplest days of the form it generated worthwhile political commentary. Renato Jones wants to inspire a revolution, it wants to give life to your fantasies of the rich getting their just desserts for all the harm they’ve done to everyone beneath them. But as a work of political art it’s too blunt to cut through anything, too flaccid to be inspiring. It’s just a sloppy, heartless mess that satisfies your most juvenile fantasies and nothing else. Fuck that.

Renato Jones: The One% Season One is available now through Image.