You are here: Home / Features / Even Good Movies Are Bad Movies Too: Hats with Knives 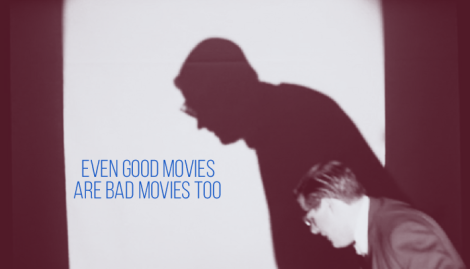 Professional malcontent Christopher M. Jones attempted to leave a bunch of comments on our page slamming otherwise well-liked works of cinema. Normally we’d have sent that to the spam folder but we were impressed by his boldness while simultaneously disturbed by the sheer volume of disses he left on articles that in fact had nothing at all to do with the films he was criticizing. Because we believe in the strength of quarantines, we asked Christopher to instead turn this into a column for us, appropriately named Even Good Movies Are Bad Movies Too.

The 36th Chamber of Shaolin: It’s not as good as pretty much any other Gordon Liu movie but, to be fair, Enter the Tales of a Eunuch doesn’t have the same je ne sais quoi that makes for a good album title.

The Sacrifice: Right around the time the bumpkin postman casually slipped the word “demiurge” into an unfunny anecdote about existentialism, a thought occurred to me: this movie is ponderous bullshit, but if I don’t turn it off just because it’s by a director everyone likes, that actually makes me even worse.

Three Days of the Condor: Two Hours of Sleep Apnea

The Way of the Dragon: You’d think a man who built his reputation on being able to kick people into viscous discharge would be able to script a movie where someone hits someone else during the first 45 minutes.

Death Wish: Instead of coming up with a barb for this horrible movie I’ll just describe something that happens in it in a way I guarantee you no reviewer has ever done over the last 40-plus years of its existence: Jeff Goldblum Mouth Sodomy

Halloween: You know a movie was made in more innocent times when “a big man” was considered a scary enough idea to base an entire horror franchise around.

Easy A: Good on someone for thinking to cater to Buzzfeed teens before such a classification of human even came to exist, but to this day I still can’t tell if Emma Stone is a good actress or not.

Slacker: I don’t even like taking the bus for 15 minutes, much less an hour and a half.

Casino Royale: James Bond for people who at think knife hats are silly and childish but also don’t have the attention span for The Constant Gardener.

The Constant Gardener: …wait a minute

An American in Paris: Musicals, like superhero movies, are for morons and sex offenders, but rarely can one movie so thoroughly cater to the tastes of both with the hateful precision of an Academy Award winning film from 1951.

Anchorman: The Legend of Ron Burgandy: MAYBE IF I YELL ENOUGH A JOKE WILL HAPPEN