You are here: Home / Features / Our Lady Of The Crucifix And The Hollywood Sign: Florence Reinvents Herself on How Big 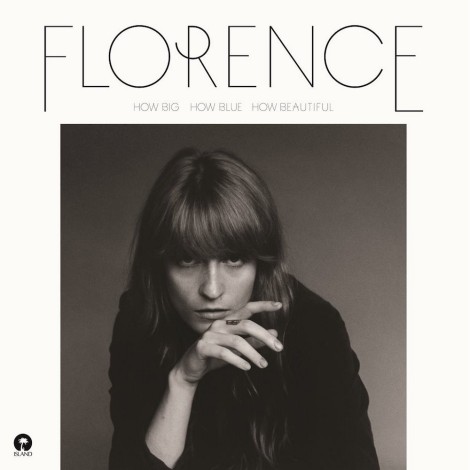 “Don’t touch the sleeping pills,” the singer commanded, and I was shocked. Not because the topic is all that taboo, mind you—on today’s pop-music scene, it’s inoffensive stuff, and for this particular artist, who writes often of one-night-stands and suicide-by-drowning, it’s small potatoes. What struck me about the sleeping pills was how ordinary they felt in the macabre context of Florence Welch’s songwriting. Her catalogue is full of songs that are like spells. These pieces are chock-full of chants and charms, of occult details meant to ward off the problems of mind and body: the holy water in “Seven Devils,” the palm shapes in “Heartlines,” the herd of annihilating horses in “Dog Days Are Over.” In this milieu, a bottle of Motrin seems decidedly out of place.

But that’s because this record wants to change that milieu. The “sleeping pills” lyric, the first line of the first song, warns us of the coming re-orientation: this record will dial down on the supernaturalism and cosmic despair, and instead focus on interpersonal relationships and the natural world. This isn’t to say that Old Flo is gone away entirely; “Ship To Wreck” also makes room for “thousands of red-eyed mice,” and “Queen Of Peace” offers us a Woolf-ish dose of personal suffering as operatically scaled transcendence. But for most part, the old standbys are in the corner. The big question, then, is this: Can Florence + The Machine make the change while still packing the galactic emotional wallop of their other records?

How Big, How Blue, How Beautiful, Florence’s savvy and powerful third album, shows us that they can—that she can. There are plenty of brand-new moving parts on this one, but by and large the center holds.

A key example is the sound, which is almost uniformly strong. Every album has a sonic problem to solve, and this one’s a doozy: figure out how to enact Flo’s new-found, Earth-bound preoccupations without losing the massive grandeur at the center of her aesthetic. Working with producer Markus Dravs and arranger Will Gregory, Welch has found a two-fold solution: swap harps for horns, and bring in some grungier drums.The former decision is especially clever; the well-orchestrated brass interludes are less celestial than the swirling harpstrings of old, but, as “Queen Of Peace” reveals, they’re just as epic. And the rootsy drums on “What Kind Of Man” prove that it doesn’t matter what planet the percussion comes from, as long as it’s primal and pulsating enough to send Florence surging toward her next dramatic high. These days, many artists use these kinds of instruments to go for a “throwback” sound. But with the help of the Machine, Florence bends them to her will.

Of course, the best instrument of all is still Florence’s voice, which launched her to stardom when a Wonky-Pop DJ caught wind of it in a night-club bathroom. Sifting her Joplin-esque volume through an almost Celtic tonal purity, she comes off as the world’s most red-headed and rambunctious angel–and her wingbeat vibrato, like Joan Baez pierced with St. Theresa’s spear, only confirms this impression. That angel gives us many a holy vocal moment on “How Big,” and every Flo-natic will have their own special devotions. I’m personally in awe of her effortless slips into head voice on “Long And Lost,” and I give thanks for the impossibly sexy little aural pout she lets out at the 1:24 mark of “Ship To Wreck.” And don’t get me started on “Delilah,” where she socks us an “I’m gonna be fine!” that seems the final word in emotional instability. In moments like these, Florence reminds us that she belongs to that highly limited denomination we might call the Presleyans—that collection of popular performers whose voices are wholly inimitable and truly unforgettable. Just as importantly, her singing here proves that she can invest everyday struggles and natural phenomena with same energy she brought to otherworldly and occult. God, this album sounds great.

It’s only in the lyrics that it commits a few slip-ups. For all the vocal oomph she pours into it, “Long And Lost” still feels a bit more like a heartfelt diary entry (“It’s been so long between the words we spoke/Will you be up there on the shore I hope”) than a full-on musical lament. And “Caught” hangs its whole structure on a chorus that isn’t quite steady enough to hold it; leveraging too much on a leaden rhyming of “caught” and “taught,” it’s one of the few Florence songs that comes off as a little dull and obvious. I’m also not partial to the Paul Epworth-produced closer, “Mother,” which ends the album on an odd note. It has a self-conscious psych-rock concept, and a second half that, thematically speaking, contradicts the first. Some critics have praised the above pieces as the album’s great hits, citing their “stripped-down” designs. But I don’t see how see how stripping away Florence’s morbidly gorgeous formalism, her greatest songwriting strength, does her any good.

But for the mostpart, that formalism is in fine form, especially on the album’s two best tracks. The first is “Delilah.” With its catchy call-and-response chorus and fresh Old Testament metaphors, the song rocks out to the exploratory upside of down-bound love: “The bells are ringing out/As I pull the pillars down/Never knew I was a dancer/’til Delilah showed me how.”

The second masterpiece is the title song, which stands as the perfect fulfillment of everything the album’s after. It starts with a heavily reverbed guitar, and the kind of glowingly surrealistic lyric that Florence’s work has led us to expect: “Between a crucifix and a Hollywood sign/We decided to get hurt.” But from there, the song moves into something quite unexpected; not a “Leave My Body”-esque desire to be raptured off of Earth, but a realization that rapture might be attainable on it. As the drums and orchestra swell under her, the singer’s worldview shifts, her synapses snap open, her apathy shatters: “We opened the door, now it’s all coming through/We opened our eyes and it’s changing the view/Oh, what are we gonna do?” Then, the chorus, with phrasing that makes every syllable of “beautiful” into its own exclamation mark, with the singer wringing every drop of affirmation from every radiant word until—until language falls away entirely and the triumphant horns fall on us (Larkin) “As they say love should/Like an enormous yes.” It is an enormous yes, and, best of all, it’s a “Yes” in Florence’s singular, nigh-unbeatable language.

If every moment on the album were this great, How Big, How Blue, How Beautiful would be a masterpiece, as Florence’s last album Ceremonials certainly was. As it stands, eight of these eleven tracks strike me as very good, and three or four are true stunners, among Florence + The Machine’s considerable best. Quality-wise, that means the album is roughly equivalent to Florence’s debut album, Lungs. That record was a bit messy because it was a work of self-invention; How Big is a work of reinvention, with imperfect but often overwhelming results. If it lacks the unbroken unity of purpose that drove Ceremonials it still contains the quality most essential to Florence’s appeal. That is her explicit and unfashionably literal belief in music’s spiritual potential—her abiding conviction that if she dives deep enough into life’s jagged currents of joy and pain, she can create a trembling majesty that, in its best moments, rivals the power of revealed religion and revives our fullest emotional selves. And How Big proves that, regardless of the territory, Florence Welch, one of the best and boldest acts in mainstream music today, is still ready to take the plunge. She may be a bit fixated on sleeping pills, but, on this album, the singer-seeker is wide awake.

Mason Walker is a kazoo-bearing Jew who writes at his blog So Beautiful or So What when he isn’t visiting Loser City.