Sunstone is an interesting comic book because it’s both horrible and something we need more of. The graphic novel originated as a webcomic (the publication details aren’t clear, but I believe this is only a “volume one”) by Stjepan Sejic, and concerns 20-something Lisa, a straight woman who has a fetish for bondage and domination, but who hasn’t been able to find someone who shares these interests, which has led to a lifetime of passable but ultimately unfulfilling sex. She eventually finds her way to the internet forums dedicated to these kinds of kinks, and she meets Allison (Ally for short, “Allycat” for Lisa). The two begin a textual relationship, moving on to webcam interaction, and eventually they choose to meet.

The story is split pretty evenly between their life before each other and the time shortly after their first meeting, and equal amounts of time are devoted to each of the women—alternating narrative captions and thought balloons reveal the thoughts and feelings of the women. It’s a work of erotica and feels very much like the softcore pornography that isn’t uncommon in French and Italian comics market. It’s very similar in sexual explicitness to last year’s Muse; there’s a lot of sexual innuendo and erotic imagery, but there’s also a lot of visual obfuscation and conversational allusion, so nothing too explicit is shown—at most, a tuft of pubic hair or a pair of breasts.

And its depiction of sex is actually pretty fantastic. It acknowledges a lot of Western society’s hang-ups about sexuality, from homosexuality and bisexuality to fetishism and casual sex. There’s a lot of people feeling uncomfortable about expressing their desire, but also a lot of damage done from not expressing those desires. Both Ally and Lisa have unfulfilling and hollow sex lives because they can’t communicate their wants and needs to their partners, and their relationship, built on mutual trust and desire and friendship, is a loving one that leaves both women simultaneously satiated and lusting for more—not only sexually, but emotionally as well. The lesbianism, which is kind of exploited as a selling point, isn’t really exploitative or voyeuristic as part of the text. There’s the obvious male gaze, which is almost impossible to avoid when a man is drawing/writing something that’s primary function is to arouse, but (writing as a straight man) the women never appear to be sexualized when they’re not engaged in sex. When the axis of the scene isn’t a sex act/sexual/sexy, the women aren’t framed or visualized any differently than the men. And the female characters, while they’re not all that unique or interesting, are at least given opportunities to exist as something outside of sexual objects.

It’s a shockingly sex positive book that gives women one-hundred percent sexual agency; it plays off fetishes but doesn’t fetishize homosexuality; and it acknowledges a lot of American society’s problems with expressing sexuality or communicating sexuality without approving of it. (I can’t name another book produced by a male cartoonist that does such a good job of this) (However, it doesn’t do a good job at ethnic or body diversity, instead lionizing the figures we see put on a pedestal all day/every day.)

And Sejic’s art (except for the panel where one of the characters fingers are so poorly delineated that they appear to have put on a pair of mittens in the interstice between panels) is good—aesthetically and functionally. It’s a little more mimetic than I typically like and Sejic’s digitally-composed line has a smoothed over, poreless texture that I think gives it the look of overproduced, professional pornography, which inherently lacks the awkward fumbling and viscera of real sex (does any mode of pornography really approximate what actual sex is like, though? (Maybe footage from that Google Glass app that lets you and your partner watch yourselves screw? (I don’t actually want to know, you pervert))) But as static images of women in very little clothing, Sejic is able to render and pose the female form in a way that is pleasing enough to the eye that it functions as erotica. And while that’s as subjective statement as any, it worked for me OK, and it I guess it worked for a lot of other people, as its fanbase is larger than you would probably think and it’s still growing.

Sejic, who cut his teeth on such avant-garde titles as Ant, Grimm Fairy Tales, and Top Cow’s Witchblade, does some really interesting things with page layouts and storytelling here that I wasn’t really expecting (not because this is porn, but because I’ve read other Sejic comics). There’s a page where the last last three or four panels are constructed like an inverted pyramid with the background slowly vanishing as visual representation of isolation and loneliness, which is a heavy-handed visual metaphor, but one that looks good and flows well. But the most notable example of Sunstone’s aesthetic value are in its two page spreads which counterpose two scenes, one from Ally’s POV and one from Lisa’s, and are structured around some centered image (Ally and Lisa back-to-back) or a J.H. Williams-style meta-image (A spread of panels part and apart of a corset, its laces knotting and looping between and over panels). But interesting isn’t the same thing as good, and while those layouts look fantastic—they really do have this engaging stylistic quality that’s difficult not to appreciate—they read counterintuitively and are clearly the work of someone who wants to manipulate the collage but doesn’t have the acuity of someone like Williams. Each half of the spread was clearly designed as single image, and is intended to be read a single image (Left to right but stop in the middle; top to bottom). The problem is that the images are presented as a single image, so the eye naturally reads them as one thing (left to right, not stopping in the middle; top to bottom). A weird mistake to make, considering the inclusion of a double-page spread where both women try on different outfits that reads really well, structured intuitively and flowing organically—it even has a weird/great Scooby Doo joke.

But Sunstone’s biggest problem is that it’s…terrible? Sejic is able to move the players around on the stage so that their sexuality is affirmed and supported, but everything else is…I don’t even know what everything else is.  The conceit is that Lisa is writing about her experiences as a novel, so the story is actually a story in a story, which…I just watched Lars von Trier’s Nymphomaniac and I thought the framing story structure of that didn’t work in the first volume because nothing was ever done with it, but in the second volume the story loops around and it actually begets probably the best scene in the whole movie (the last scene). But nothing is done with the conceit in Sunstone, and Sijec makes a big deal about it in the beginning of the book but then completely drops it, like, ten pages in. All the narration is first person with an alternating POV, which didn’t need the “This is a novel…inside of a comic…” thing.

The dialogue is cloying and clunky—melodramatic in the worst way. Sejic’s “acting” is strong and the character’s faces are enough to carry you through a scene, but it’s bogged down in so much expository text that it just reads as “Ugh. Okay.” Lisa biting her lip is usually well timed and communicative, expressing both an interiority and sexiness to the character, but those moments are almost always ruined by some joke or comment that doesn’t really need to be there. The result is a book bogged down in redundant text that does nothing but affirm what we could already read in the characters’ faces, and it actually works to flatten the woman and make them infinitely less interesting and complex—otherwise interesting characters read as stupid and childish (their mutual anxieties on first meeting are a big deal, but watching them be anxious is interesting, watching them talk about it makes them appear weirdly immature).

I’ve heard a lot of people comparing it to E.L. James’ Fifty Shades books and, while I haven’t read those, that seems like an incredibly accurate comparison based on what I’ve heard about them—sexually charged without being too explicit, lovingly conceived if not particularly well executed, a lot of attention from people who don’t typically read that sort of thing (Erotica/”Romance”, or books/comics, take your pick), and a focus on a kink that doesn’t get a level of attention commensurate with its practice. There’s also an analogous quality/popularity imbalance. 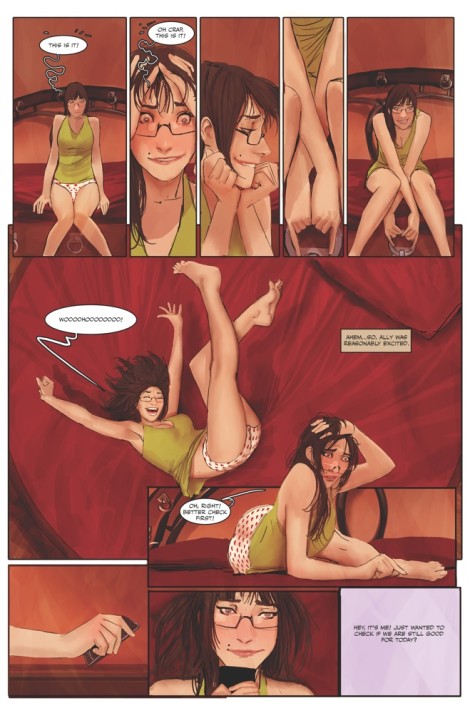 But while the book isn’t all that good—it looks good in parts, and the sex is more erotically presented than a lot of the T&A in superhero comics—I’m glad that Image is giving it a print edition and pushing it into the direct market in a big, bad way. Sex positivity is important in general, but it’s especially important in a medium that has, at least in the mainstream, largely failed to hook female readers (preferring instead to pander to some weirdo Platonic ideal of a fourteen year old American male). Sejic is at least attempting to create something that both men and women can enjoy without resorting to exploitation; it’s an attempt to present to the mainstream something that is almost never represented there. It’s not my ideal exemplar of this stuff, but it’s an important step in broadening comics’ appeal.

Shea Hennum is a Texas-based writer who currently serves as the lead writer about comics for This Is Infamous. His work has also been featured at The Comics Alternative, eFantasy, The Fringe Magazine, and Schlock. Essays of his will be included as backmatter in upcoming issues of Shutter from Image Comics, and he can be found as sheahisself on both Twitter and Tumblr.