You are here: Home / Features / Growing Pains: The World of Kanako Review

The World of Kanako is the most precise and complete cinematic representation of adolescence ever committed to film. That’s not to say that it renders a compelling portrait of adolescent characters—the movie is actually about a middle-aged alcoholic searching for his Tony Montana of a daughter. What I mean is that the film itself, its structure, its style, its space, is a totally compelling representation of adolescence. And, like all adolescents, The World of Kanako is totally unsure of itself. It oscillates wildly between Michael Mann, Harmony Korine, Sam Mendes, and Jason Eisener. The hand of Testusya Nakashima, who directed the well-received Confessions in 2010, is totally absent here, and it is indistinguishable from the notebook scribblings of an enthusiastic high schooler.

The A plot of Kanako follows Akikazu Fujishima as he searches for his estranged daughter and simultaneously deals with a drinking problem (his first scene also alludes to a possible manic-depressive schizophrenia, but that’s a fact that is never touched on again). Fujishima is a former police officer, a detail dropped on the audience in the first few minutes without ever being picked up again, and he likes to dress like Sonny Crockett. As he searches for his daughter, the titular Kanako, he discovers that she is a sociopathic monster person—so cartoonish in her villainy that she could pass as Snidely Whiplash—she does drugs and sells drugs, oh, and seemingly for no reason, she lures in teenage boys with the promise of love and sex so that she can force them into sexual servitude to old men. In her sociopathy, she stole something (I still don’t know what) from some people (I still don’t know who), and now Fujishima has to deal with them. The whole thing is overcomplicated, and it grotesquely climaxes in Fujishima raping a woman in front of her son just so that a Yakuza boss will know that he can get got. All of this and Fujishima also has to evade the cops (except for when he runs over two of them and they just stop caring about him (except for at the end, when they just randomly show up again (but not to arrest Fujishima))).

This thread blends narratives that will be totally familiar to anyone watching something released by Drafthouse Films. There is the reveal of a teen girl’s secret life like in Twin Peaks, and there is the plot-twist incest like in Oldboy. There is the poorly used anime asides a la Revolver, and there is even a tonally-inconsistent credits sequences made to look like a grainy cop comedy from the 1970’s. It’s as stylistically mish-mashed and scattershot as Joseph Kahn’s Detention, but it lacks that film’s purpose, personality, or narrative coherence. Like all adolescents, The World of Kanako is unsure of who it is or what it wants. So, it’s just kind of trying everything—regurgitating the fashions and modes of its models. That’s all well and good for a 15-year-old still working through his Nietzsche and Bukowski phase, but not for a polished film from an accomplished filmmaker. Here, it’s exemplar of the worst that a film made in the shadow of Quentin Tarantino has to offer. It’s one of those movies. You know the kind: the ones that think their cynicism is endearing, their purposeless stylistic exercise is captivating, their indulgence of tropes is post-modern. Those movies suck.

Unfortunately, the film’s bloated uncertainty doesn’t end there, and half the film is devoted to a B plot about Kanako. It’s told from the perspective of an unnamed kid played by Hiroyu Shimizu, and as the kid falls in love with Kanako he becomes the vehicle by which the audience is confronted with her monstrousness. For the first hour of the film, it’s not clear who this character is or how he fits into the larger narrative—there’s not even any clarity regarding when the B plot takes place in relation to the A plot (The A plot makes very, very precise notes of the time and date that everything takes place, but there doesn’t seem to be any reason for it to). After a number of these American Beauty-esque sequences, which are all accompanied by horrendously ill-suited music cues, things start to make sense, or as much sense as the film ever does. Kanako befriends this poor kid before deceiving him and tricking him. She has him raped and then, later, killed (Maybe? It’s never clear if she’s responsible for his death or just present for it). All that stuff is, without a doubt, totally gross; Kanako takes advantage of this kid and subjects him to some genuinely upsetting stuff. But he’s not a character. We see a brief glimpse of his home life, but even though he narrates (bizarrely, the only parts with V.O.) his story, he is never given any sense of interiority. I certainly didn’t know what he was thinking beyond “I would like to fuck Kanako,” which I only know because he masturbates to her. This kid doesn’t even get a name. His story is all shock (evident in a seizure-inducing party scene that is kind of what people thought Spring Breakers was). He’s just some tool to expose the comic book villainy of this girl, so his full half of the movie is more boring and unnecessary than affecting. But isn’t that just the most teenage thing, though? Ape some high energy, overly-dynamic stylistic tics to seem “Cool”; take to wearing muted colors and pretending to be “deep” and “arty” with empty, nonsensical platitudes.

The whole thing ends in an info dump that clears up any loose threads, and it also reveals that the whole film was a pointless journey where nothing was actually resolved. It was all just exercise in violence. Strange violence, too. Nakashima routinely revels in copious amounts of thick, oozing blood, but other moments cut away in favor of a black-on-red photoshopped splatter insert. It’s eager to depict violence in some instances, but totally afraid in others. In this, like most things, the film is inconsistent. In fact, the only thing that it is consistent in is that all of its actors behave like they’re on drugs.

Marc Savlov of The Austin Chronicle calls Koji Yakusho (who plays Akikazu Fujishima) “absolutely excellent,” but that’s nonsense. Yakusho, like literally every actor in this thing, behaves like he’s in a completely differently movie from everyone he interacts with. He plays it seriously, to be sure, but this creates a huge dissonance with the film’s more comedic scenes, and he’s not able to adapt his reactions to others actions (which include a lot of inappropriate and inexplicable laughing at nothing). His performance, as well as everyone else’s, is impossible to gauge, and you wind up feeling like none of them should’ve even bothered. 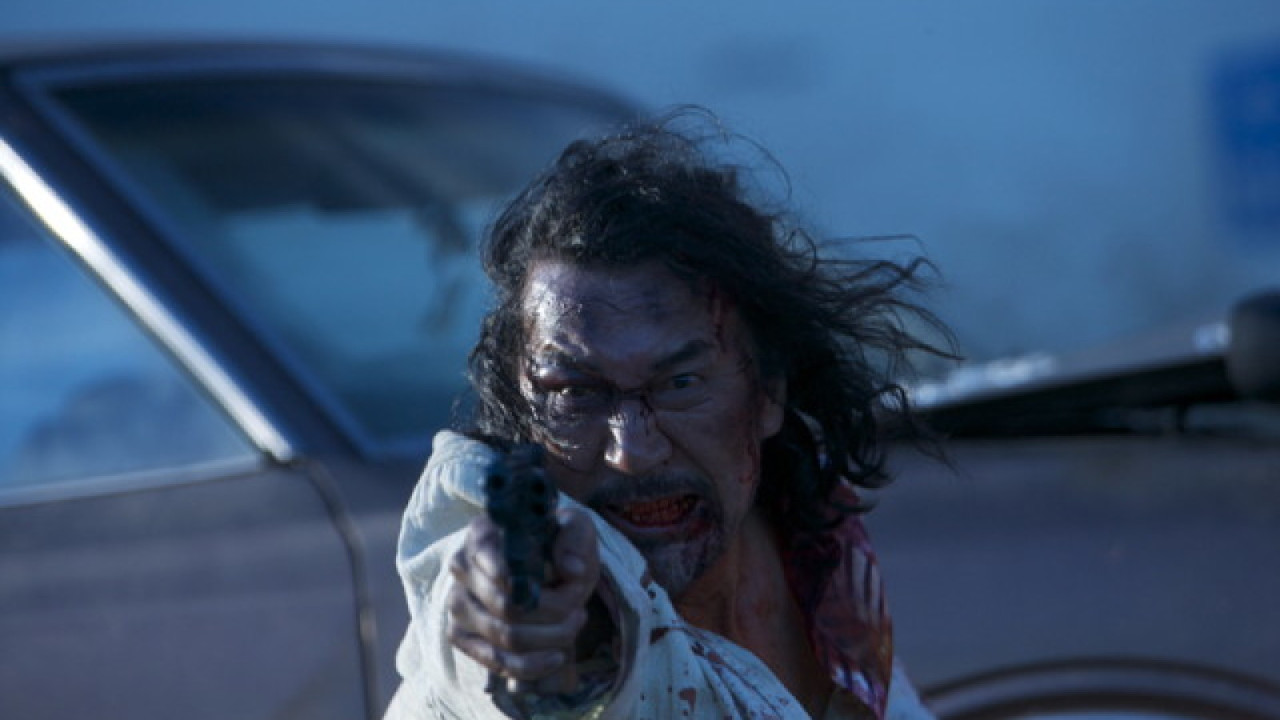 But for all of its sins, the most egregious thing about The World of Kanako is that it’s boring. It takes a bunch of stuff that’s cool and interesting, but it takes the worst parts of them and stitches them into a Frankenstein monster that’s more pitiable than terrifying. There are so many little moments, little details that, by themselves, are awesome. Nakashima composes a number of absolutely gorgeous shots throughout the film, and the last five minutes of the film is this lush, beautiful shot of these figures dressed in black moving through a snow covered landscape. But all of that stuff is undigested. We’re watching Nakashima regurgitated tired plots, tired characters, tired techniques, and he’s leaving all the misogyny totally intact (his villains are the women out of an MRA’s wet dreams, and his hero is the sword swinging white knight who indiscriminately kills and rapes women because fuck you). While it’s to be expected that an adolescent is a garbage person who needs some work before they become an acceptable human being, it’s annoying and irritating for a movie at this level to be so malformed.

Shea Hennum writes for Loser City, Paste Magazine, The AV Club, and Playboy. He co-hosts the monthly manga episode of The Comics alternative, and he's contributed backmatter to Shutter by Joe Keatinge and Leila Del Duca.