You are here: Home / Features / Hella Personal Film Festival is a Standout Work in Both Open Mike Eagle and Paul White’s Careers 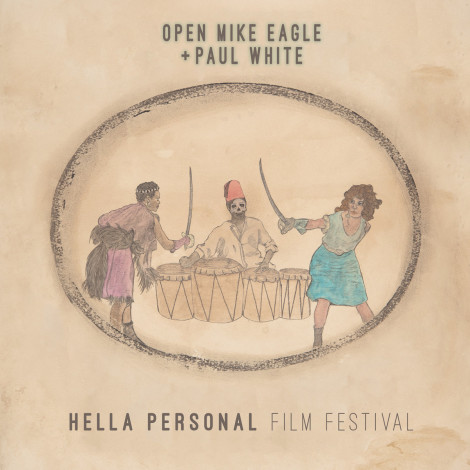 The biggest complaint about the weird, abstract California indie hip hop scene is that it’s way too fucking obtuse and heady, forfeiting swagger in favor of a constant pursuit of higher word counts and more jarring cadences. I never really agreed with the assessment of the scene as difficult and unwieldy but I could understand where it was coming from. You don’t listen to a Busdriver album to hear a personal story, you don’t tune in to Milo expecting danger and you don’t expect any of their peers to welcome you with open arms, their material is always something you have to approach on its own terms. Over his past couple albums, Open Mike Eagle has shifted from this, blossoming into a laid back, self-aware chronicler of modern anxieties to go along with his status as an actual hip hop scientist, with the remarkable A Special Episode of… EP giving way to Hella Personal Film Festival, a collaboration with Paul White that showcases OME’s most reflective and thoughtful songwriting to date.

White’s feel good production asserts itself immediately, creating a more tuneful and comforting environment than the often dark and acidic beats OME has utilized in the past. Opening with “Admitting the Endorphin Addiction” and its clever use of the Brothers Johnson hit “Is It Love That We’re Missing,” Hella Personal Film Festival makes good on its title, OME navigating the contradictory ways he tries to cope with and hide depression and anxiety. “I heard that when you in a fucked up space/No one can hear you signal help” sets the album up to be a meta inspection of OME’s self-defense mechanisms, how “All this belly-aching’s just to say/My belly’s hurting after all,” both warning and boasting that “You’d really be surprised how innovative/I can get when left alone.” OME later says “all my heroes are singers who can’t sing,” but from its start, Hella Personal Film Festival makes great use of his tunefulness and knack for insidious melody, the tracks hitting their own endorphin centers, a clear change from the way prior standouts like “A History of Modern Dance” actively eschewed any melodic hook.

There’s still plenty of weirdness but it’s more frequently of the “Protectors of the Heat” variety, supported by call and response group chants and an excited flow, White functioning as a producer who knows exactly how to maximize OME’s skills while also pushing him towards new sonic directions, leaving plenty of audio space for OME’s voice to ring out crystal clear and bold. When OME ups his word count on tracks like the frenzied phone addiction anthem “Check to Check,” White changes tactics, dropping in sly, subtle melodies at the corners of OME’s vocal, allowing the emcee to keep building the tense pace while the synth accessories do more of the riff legwork. And at the same time, OME’s consistently shifting style pushes White’s skills too, making for a collaboration that expands on the individuals’ talents, amplifying their signature traits while carving out new ground.

Mid-album standout “Smiling (Quirky Race Doc)” is perhaps the pinnacle of the collaboration, White’s moody yet seductive beat a perfect accompaniment to one of OME’s sharpest songs. Focused on the way people react to him when he’s off stage versus how they react to him on stage, “Smiling” is an unapologetic confrontation of the secret racism of white fans, how “For the most part/No one smiles at me/Because I’m a black man/Until the show starts” OME’s framing of that on stage versus off stage dichotomy is perfect for capturing the hypocrisy of white music culture, where thousands of rambunctious frat kids will descend on SXSW each year to hear what’s hot at Fader Fort while business owners not-so-secretly complain about the dangers they think they’re in because of the increasing number of black festivalgoers. For OME it’s a clear example of the kind of covert hostility he has faced all his life, as “Today I saw a lady say hi to a stranger/Then avoid my eyes like I’m a white person strangler,” before going on to call out Democratic voters who hit the locks on their car doors whenever he’s nearby. OME pinpoints his attempts at self-confidence as something that only made white folks more fearful, creating a depressing scenario where black self-esteem is a liability, an excuse for the close minded to be afraid, even though “If you tell people you’re scared of them/It makes them act scarily.” It’s not too surprising that the song is followed by a claustrophobic track called “Leave People Alone.”

Open Mike Eagle’s eye for detail and ability to express these things that are internally eating away at him, be they racism or depression or self-loathing, have always been notable but Hella Personal Film Festival sees those traits crystallize with the help of Paul White’s sensitive, adventurous production, making the album an incredible achievement in the careers of both artists. Hella Personal Film Festival might not resolve any of the problems that helped inspire it but it’s an impressively clear view of its creators’ perspectives, challenging in the questions it raises rather than its delivery.