You are here: Home / Features / Feels Like Home: Homemakers is a Sometimes-Beautiful Mess

Homemakers, an independent film making its New York City premiere this week at Brooklyn’s Northside festival, introduces audiences to protagonist Irene, played by Rachel McKeon, as a somewhat overwhelming fun-house mirror version of the Manic Pixie Dream Girl. She chews with unsettling, openmouthed vigor, bursts into inappropriate tantrums, and generally marches around flirting aggressively with viewers, daring them to find her loathsome. Frankly, in the beginning, it’s not hard. But the film slowly peels back the many layers of Irene and, while not defending her more outlandish actions, at least begins to suggest some reasons for why and how she ended up the way she is.

Irene, a musician who lives in Austin and has a troubled relationship with bandmate Kicky (Molly Carlisle), is called back to her hometown of Pittsburgh following the death of her grandfather, who left his crumbling house to her in his will. She forms a friendship with her kindhearted but underachieving cousin Cam, played with nuance and sensitivity by Jack Culbertson, and they begin to build a haphazard life together, battling demons and attempting to make sense of who they are.

Homemakers’ largest obstacle is one of promotion—it’s billed as a punk comedy, and it’s one of the least funny movies you’ll see all year. I watched it a second time around specifically with an eye for jokes, and found a scant few. (The most effective of these is probably a nice callback moment that explores the domestic potential of single-serving Kraft mac and cheese.) What the film has in spades, however, is drama. And a good dose of dark, dark tragedy.


The characters are all seemingly alcoholics—it’s a rare scene where someone isn’t chugging directly from a bottle of liquor—and family relations are in a state of deep and damaging disrepair. Everyone has ways of being abusive to one another and, in turn, ways of coping with that trauma. It is in these desperate, deeply unfunny moments that the film is most successful. The scene in which Irene pleads with the distant, oft-uncaring Kicky to stay in the dilapidated fairytale of a home is a fine example. “We could have nice things,” she says, trembling with fragile, childlike conviction. It’s a powerful moment, shot and acted beautifully, and absolutely not funny.

Tonally, the film runs into a bit of trouble, working more as a pastiche than a singularly cohesive product: at one moment it’s sweet, spare, and gentle, then the next it’s over-the-top surreal and Lynchian; not-so-effortlessly twee, then perhaps highly pointed and heartrendingly tragic. (Again, “comedy” is not how I would categorize this movie.) This provides for some highly stylized and sometimes wholly original individual scenes, but they never quite flow as naturally as you might hope.

Similarly, when it comes to narrative, Homemakers might have benefitted from a more precise or controlling hand, both during filming and in the editing room. Though this is not a movie that intends to be primarily plot-driven, it could have used a few more scenes, especially in the first third, that establish the main characters, their backgrounds, and their relationships to one another. For example, I would have appreciated a scene at the funeral that kicks off the whole chain of events in the film, which might have casually answered a number of questions I had about Irene’s family and financial situation. 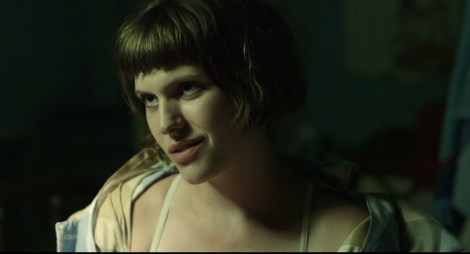 If only Rachel McKeon’s excellent performance as Irene wasn’t so utterly fiery and committed, I’d have said the main star of the film is the house itself. Set decoration, lighting, and cinematography are where Homemakers really shines. It’s no surprise that the film’s writer and director, Colin Healey, describes himself as deriving inspiration from the “narratives that transform from ‘places’ into ‘spaces.’” The titular home is both a wreck and a masterpiece, very deftly representing both “place” and “space” at various points in the film. The change from one to the other is subtle, and the house never really makes a case for being particularly tidy and together, even at its homey pinnacle, when Kicky derisively suggests Irene has started “nesting.” But the space feels different, it feels lived in. It even, sneakily, starts to feel like home. And it’s only when this new version of normalcy, with its coffee mug collections and quirky wall decorations, is threatened that the viewer even notices how far the house has come.

Homemakers is beautifully shot—any given scene contains a dozen frames that could work as smart and lovely photographs on their own—and boasts some impressive performances, but would benefit from more fully embracing the dramatic elements that make it most memorable.

If you’re in New York, Homemakers premiers at the Northside Festival tonight and then has an encore tomorrow night.

Kayleigh Hughes is an editor, freelance writer, and overthinker. In addition to contributing to Loser City, Kayleigh occasionally writes for xoJane. Talk to her about literally anything–she doesn’t have that many friends–on twitter or via email.