You are here: Home / Features / She Wants to Mambo: Jukebox Mambo is a Lovingly Curated Compilation of a Frequently Forgotten Scene 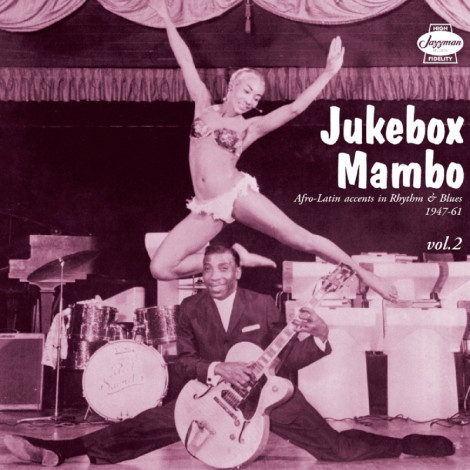 The overall morbidity of the music industry in the digital age makes it easy to assume no one is buying anything physical anymore, but one of the less talked about “boom” areas in music is the obscure reissue game, where labels like Numero Group and Light in the Attic have built off the precedent set by Rhino Records and continuously release lovingly arranged and designed reissues of records that also happen to sell for high prices. Numero and LitA are two of the more visible practitioners of this craft, but crate diggers looking for better releases of the scratched up vinyl they’ve secretly loved for years aren’t hurting for options, and the UK’s Jazzman Records has a pretty typical origin story for the field, beginning with an obsession with John Peel’s show that led to getting into the import business and eventually deciding that releasing some of the rarer cuts in more fairly priced collections wouldn’t just be lucrative, it would be a service to people who want to hear great finds but can’t afford collector prices. Jukebox Mambo Vol. 2 is Jazzman’s latest collection, but it’s a great entry point for both the label and the mambo genre, handily proving Jazzman has a knack for curation to rival Numero Group and also showcasing why these releases continue to build new audiences as other labels struggle to net sales.

Jukebox Mambo makes its genre focus clear with its title, but it’s the kind of compilation that tells a story, with Jazzman DJ Liam Large’s choices detailing the cross-cultural pollination that made Afro-American music so exciting in the ’40s and ’50s. The music on Jukebox Mambo is definitively mambo, but where contemporary thoughts of what that means are based on watered down novelty tracks, this is mambo as a mixing pot blending strands of jazz, swing, big band music and R&B and the only real constant is the music’s demand for you to dance. That’s detectable early on, with Christine Chatman and the Peppy Prince Orchestra’s “Run Gal Run” setting an early experimental tone, as the song’s structure and melody is in line with jukehouse R&B while the rhythm and percussion are more Latin-infused. The Latin percussion gets even more of the spotlight on Johnny Oliver’s “All I Have is You,” where his rich, full voice is backed by an irresistible, click-clack beat punctuated by bluesy guitar riffs.

The simpler, more dance-oriented tracks are arguably the compilation’s most enjoyable moments, though. The Chanters’ “She Wants to Mambo” is a personal favorite, taking a playful, chimey piano line and a big boxy beat and joining it with an addictive, simple call and response vocal that mostly repeats the title. The verses are mostly speak-singing, detailing a narrative of a dance crazed woman a la Harry Belafonte’s “Jump in the Line,” while the chorus has the backing band declaring “She wants to mambo!” as our mambo lady agrees and makes passionate moans and hollers to emphasize that need. It’s easy to fall into the trap of thinking songs from this era were sterile and polite, but “She Wants to Mambo” is wonderfully dirty, making it abundantly clear that mambo isn’t a dance for puritans.

That carnal tone is also clear on Camille Howard’s “Within This Heart of Mine,” with its lyrical focus on a “Happy yearning/That’s constantly burning/Within this heart of mine.” Howard’s delivery is more brassy than the Chanters, and the rhythm is more tango-leaning, resulting in a track that gives a glimpse at what an update of Carmen may have sounded like in Harlem in the ’40s. On the flip side, Freddie Mitchell and His Orchestra explore some of the drawbacks of being in love with a woman who is constantly on the move in “Later Gator,” his deep, yearning baritone sounding suitably disappointed that his love has flaked on him while his incredible horn section seems to suggest he wash away his sorrows in a dance hall.

Even more yearning is John McKinney & the Premiers’ “Gee I Love You,” one of the rare guitar-driven tracks on the compilation, where the snakey, trebly guitar licks weave in and out of McKinney’s soulful vocal delivery and the bassy piano. “Gee I Love You” has the haunting moroseness of a post-punk song, but the Latin guitar brings to mind early Santana, making for an intriguing juxtaposition of dark tones and hip swaying rhythm. By the ’60s, elements of this music were getting filtered into the mainstream through cross-genre hitmakers like Santana, and it can be a little jarring to hear the roots here, particularly with songs like Four Blazes’ “All Night Long,” which sounds like a more vocally driven take on The Champs’ “Tequila” until you realize it predates that song by nearly a decade.

That’s a big part of the fun of these kinds of compilations, though, as they show off musical scenes that may never have gotten their due but still had a profound influence on people in the know. The physical release of Jukebox Mambo Vol. 2 more than makes its price and import status justified with the inclusion of full biographical liner notes and photographs that reveal even more about the mambo scene. Jazzman has done a great service bringing this music to contemporary audiences and their careful curation and passionate crate digging should lead even more listeners to do some exploring of their own.