You are here: Home / Features / Menaces to Society: Kaijumax is a Surprisingly Deep Monster Story

It’s easier to imagine prisons are full of monsters, isn’t it? To believe every incarcerated felon is there justly, locked away for the betterment of society, illustrative of the cost of being a citizen in an orderly world. The alternative is to admit there is no perfect justice, no way to ensure everyone behind bars has been sentenced without mistake. Reality states this is impossible. There are convicts who are innocent, wronged by a flawed legal system. There are also convicts who are guilty of their sentenced crimes but whose sentences are unjust. Kaijumax is an attempt by Zander Cannon to take the first half of this conundrum– the idea of prisoners as monsters– and pair it with this latter issue, that of the harsh sentencing for crimes that are perhaps necessary, all in the form of a comic that looks and reads as pure fun. Call it form following function, a paradox of philosophy wrapped up in a paradox of presentation. Or ignore all that heady rhetoric and enjoy a bunch of kaiju thrown into a world not unlike HBO’s Oz, only with significantly less male nudity.

Kaijumax begins the same way so many other prison stories do, with a new convict being escorted to his cell, forced to quickly learn the lay of the land. The difference in this case is that the monster isn’t a violent criminal but a literal monster, a massive insect-like creature named Electrogor. Cannon knows the prison drama genre well, leading the reader into this bizarro flip of that world through the very eyes of Electrogor, an aesthetic choice that fits the cliches of the genre but also enables Cannon to quickly rewrite the cues. Electrogor isn’t led in while handcuffed, he’s instead pulled in by chains attached to a giant battleship where an Ultraman-like figure lectures him on his subjugation and the pointlessness of Electrogor’s adamant claims that he’s not the monster in this scenario. Notably, Electrogor isn’t proclaiming innocence, he’s instead taking the family bread thief route, arguing that his actions, whatever they were, were simply for the sake of his children, who will undoubtedly starve without him.

From there Cannon continues the subversion of prison drama cliches, showcasing a number of visual gags that play with the audience’s knowledge of what to expect from prison stories. There is a yard where the kaiju work out using skyscrapers as weights and a quick detailing of the various factions in the prison community, from “cryps” (as in cryptozoologicals) to J-pops (OG kaiju), both functioning as bypasses of exposition, enabling Cannon to show off the flexibility of the kaiju world he has constructed and set up the basic plot beats in the process. The gist is that Electrogor is desirable to a number of these factions, each of which is hoping to carve up the human world in the post-apocalypse they’re dreaming up. There’s a running joke of Electrogor’s “hardness” (he has an exoskeleton that looks pretty ferocious) but the point is that the reason he’s imprisoned is because he’ll do anything to protect his family, and the story has already taken significant steps to show how much of a weakness that can be in a world where everyone is preying on everyone else.

So as fun as Kaijumax’s setting and dressing are, it’s immediately apparent that Cannon wants to tell a story about bonds, both in the sense of a familial bond and a shackle, and ultimately how those two types of bonds aren’t all that dissimilar. That’s an ambitious narrative hook for a comic that could arguably get by on references alone and it’s to Cannon’s credit that he is so committed to taking this story at face value. The best prison stories are the ones that place you in the shoes of the confined character, asking you to think of how you would react if you were wrongly imprisoned, either as a result of being framed or because the crime you committed was for a greater, more selfless good. And those stories go further with that, asking what lengths you would go to to be free. Kaijumax already seems prepped to explore that in full, with Cannon’s bright coloring and expressive character designs serving a role akin to a magician’s patter, distracting from tricks of emotion to get you ensnared in a story you thought would just be a quirky monster tale. 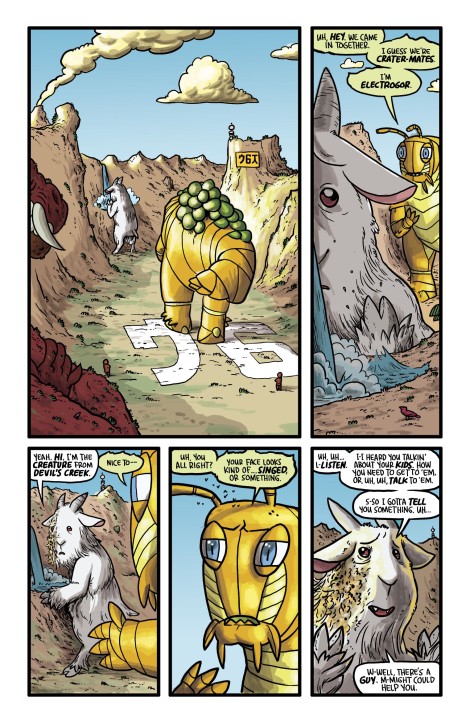 Those monsters, though! Cannon’s time served with The Tick and Alan Moore and Gene Ha’s Top 10 both pay off handsomely here, as Cannon gives Kaijumax ample playfulness, filling the world with intriguing spins on recognizable monsters and newcomers alike. Each page is packed full of Easter eggs, providing more reason than usual for rereads. Kaijumax is a comic that lives and dies by the strength of its characters and in terms of personality and aesthetic, Cannon offers no shortage of reasons to stick around. That’s all the more noteworthy when you consider that comics secretly has a kaiju renaissance happening at the moment, thanks to Kaijumax peers like Jason Copland and Michael May’s Kill All Monsters and James Stokoe’s return to Godzilla.

But those series, inventive and imaginative as they are, so far lack the emotional depth Cannon brings to Kaijumax. The idea of prisoners as actual monsters is admittedly a bit on the nose, but Cannon’s interest in exploring the psychological impact of that– of being judged immediately on appearance and demeanor– elevates this story to a level that may soon make it fit those Oz comparisons in ways other than setting. At the very least, maybe after this we’ll all have a new appreciation for the parental instincts of our kaiju enemy.