Here at Loser City, we’re unabashed genre fans but even we recognize that action films can often be difficult to defend. Lucky for you, we’ve decided to look back at some of the best examples from the genre, analyzing what it is about these works specifically that allows them to succeed. Today, Nick Hanover delves into Nemesis, Albert Pyun’s unabashed Terminator knock-off from 1992, which rises above its source material by embracing a Shaw Brothers-like devotion to rubbery action and goofy plotting.

We usually think of rip-offs as creatively bankrupt ventures, projects that hope to make bank by offering up cheap versions of the real thing for people who are too hungry for similar product to care where it comes from. But in the realm of action cinema, rip-offs of blockbusters are frequently some of the most imaginative and bizarre representatives of the genre. This is abundantly clear when you look back at the chaotic days of the late ’80s and early ’90s, when countries were putting their entire GDP into the development of Robocop and Terminator knock-offs, like the Indonesian cyber sex magic opus Lady Terminator, and B-movie schlockmeisters like Cannon were solving their financial woes by giving low budget auteurs like Albert Pyun hundreds of thousands of dollars to churn out quickie robo-killer movies. Pyun filled the gap between the original Terminator and T2 with the surprise Jean Claude Van Damme success Cyborg but when it comes to determining the greatest bizarro Terminator franchise, my money is on the post-T2 flick Nemesis.

The amazingly convoluted story behind the development of Nemesis goes a long way towards explaining its weirdo appeal. Originally titled Alex Rain and intended as a vehicle for Kelly Lynch, Nemesis underwent five years of rewrites and reimaginings, with detours through every conceivable realm of sci-fi action, from near-future cybernoir to a Total Recall-esque future Mars setting to a fucked up Oliver Twist-esque adventure with a 13 year old street urchin. While Pyun eventually settled on a Chinatown but with cyborgs plot, many of these original elements made it into the final product, albeit in barely recognizable ways, and Pyun’s eventual partnering with the Shaw Brothers’ Imperial Entertainment brought him into contact with his new muse, Olivier Gruner, at the insistence of the Shaws, who didn’t think a 13 year old street urchin was as bankable as their new kickboxing discovery. The Wikipedia summary of this event ranks as one of my favorite sentences in film history: “At a long meeting at Imperial, both sides went back and forth until Imperial agreed that, other than the sex change, they would let Pyun make the movie he wanted to make no matter how unorthodox his methods.”

“Unorthodox methods” is a very polite way to describe Pyun’s vision for Nemesis; this is a movie that switches gears constantly and has one of the most convoluted plots in action cinema history. The basic gist is that Gruner is Alex Raine (now inexplicable given an e at the end of his name), a cybernetically enhanced LAPD cop who has a meltdown before an especially gruesome encounter with hacker freedom fighters The Red Hammerhead Army. After the battle, Alex heads down to the village where the surviving Red Hammerhead operatives from that mission are hiding out and assassinates them, and then resigns in disgrace after his handlers show up to chastise him for his actions. He then goes from being a hilariously incompetent cyborg cop to being a hilariously incompetent merc-for-hire with an explosive rep that leads to him getting rediscovered and kidnapped by his former LAPD handlers pretty quickly.

It’s at this point that the movie really picks up, placing Alex in the middle of a twisty conflict between what’s left of the Red Hammerheads and the increasingly more roguish LAPD. Alex is tasked with hunting down his former lover-turned-android Jared (Marjorie Monaghan) before she can give the Hammerheads some sensitive data, but really Alex is just a patsy, complete with a Escape from New York-style ticking timebomb in his chest. Eventually we learn that androids are infiltrating the American government by stealthily replacing humans, and the Hammerheads are trying to save humanity, but honestly all of this is gibberish dressing for Pyun’s mad Tex Avery approach to action cinema (and in one of its many bizarre connections to modern blockbuster filmmaking, David S. Goyer ghostwrote much of the screenplay).

What makes Nemesis so thrilling and enjoyable is how little it cares for logic and narrative. That’s not to say Nemesis is difficult to follow– it always makes sense in its own special way– but every decision Pyun and company make is clearly in service to destruction, mayhem and childish “what if” scenarios. One of the film’s most memorable sequences has a group of anonymous baddies annihilating the hotel Alex is hiding out in on the island of Shang-Lu, using their guns like jackhammers to carve out doors in walls while Alex says “fuck elevators” and shoots his way through the floors of the building. Because almost everyone in the movie is some kind of cybernetic organism, no one ever just gets shot, they get blown to pieces and keep coming; in that same hotel sequence, Alex’s surprise ally Julian (Deborah Shelton) is taken down by the LAPD cyborgs (who just happen to look like the agents from The Matrix), but continues to crawl across the floor as a very angry robotic torso, desperate to get in a few shots before she powers down for good.

Pyun reached out to the Shaw Brothers because he felt they had similar approaches to action and when you watch Nemesis, it’s easy to see why he thought that. Like the best Shaw Brothers films, Nemesis has this stretchy kineticism to it, just real enough to make all of the brutality feel painful but also ludicrous and playful so that the grim deaths and explosive violence never wear you down. The original street urchin plot also gets referenced in the relationship that develops between Alex and Max (Merle Kennedy), a young woman who poses as a tour guide eager to help Alex escape but is actually the sister of the Hammerhead operative Alex killed before he retired. Max is highly skilled and knowledgeable and functions as a street smart foil for Alex’s jaded oaf, leading to a dynamic that’d be right at home in a Call of Duty match, with Alex functioning as the tank that soaks up damage while Max nimbly runs around taking out targets. 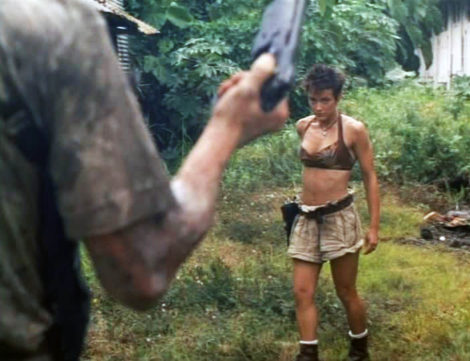 Although Nemesis borrows a lot of visual cues from darker sci-fi works like Blade Runner, that playful dynamic and the exotic locale make Nemesis stand out as a hybrid of Shane Black cheekiness and Indiana Jones adventuring. The movie has a number of noir setpieces driving home the dark grubbiness of the future, but for the most part it’s bright and vivid, and even its final battle plays out more like a scene from Jason and the Argonauts‘ Talos battle than anything William Gibson ever dreamed of. Pyun does loosely insert some thematic questions about the nature of humanity, with Alex repeatedly updating what percentage of him is still human any time he gets damaged, but this is treated mostly as a joke rather than some Descartian concept.

That’s a big part of why Nemesis is one of the rare Terminator knock-offs that stumbles into being a more original concept. T2 in particular struck a chord with audiences because of the increasing humanization of Arnold’s Terminator but in Nemesis, Alex is a Terminator in reverse, shedding parts of his human self the further he progresses yet paradoxically becoming more human and open as this happens. Alex goes from a gruff, overly serious company man to a one-liner shouting one man army corps, and by the end Max and him survive because of their partnership rather than the independence they formerly held on to. No wonder Nemesis spawned its very own franchise with a decidedly Terminator-esque adherence to “coming back.”

You can watch Nemesis in its entirety on YouTube.