You are here: Home / Features / Level Up is More Than a Mushroom, Not Yet a Tanooki Suit

It’s not uncommon for a film’s best and most memorable character to be the locale in which it takes place: the sweat drenched glitz and grime of a Michael Mann cityscape, the paradise-turned-Hell of WWII Polynesia in The Thin Red Line, the looming shadows of Jean-Pierre Melville’s noir vision of Paris. So too is the case with director/co-writer Adam Randall’s Level Up, a high-concept thriller that is at its best when zooming through the streets of London. From its sleek and sterile downtown shopping centers to its crumbling Victorian row houses and perpetually unpredictable Chinatown, the city is imbued with a sense of life and charisma that its actual lead character never matches. Although a fine diversion, Level Up is hindered by an awful protagonist and some bizarre storytelling choices that keep it from reaching its potential.

Level Up is a movie about Matt (Josh Bowman), a hapless dunce who gets drunk and plays video games all day while his beautiful girlfriend Anna (Leila Mimmack) supports the two of them with a never-detailed high powered office job. One afternoon a group of masked thugs break into the apartment, tell Matt they’ve kidnapped Anna, strap a package to his chest and tell him to bring it to a certain person by a certain time, or else Anna will die. And from there, the film is off and running—quite literally, as much of the film’s screentime is spent watching Matt bound from one London locale to the next in a panicked stupor.

As stated, these are the best parts of the movie, and they’re clearly where most of the filmmakers’ time and energy were spent. Electronic music duo Plaid score the movie, and they provide a soundtrack that is at once tense and bubbly, driving home the psychological dread of the situation as well as occasionally underscoring its hints of black comedy. Frequently the shots are cut to match the rhythm of the score, which is to the advantage of both the movie and the music by making the project seem like one long, delirious music video. And as discussed, London itself is a wonder to look at: the palette uses bright colors but is filmed through a filter that dulls their vivacity. This makes the city seem both cheerful and menacing, alive yet increasingly diseased. Aesthetically, the movie is captivating and unique.

One cannot say the same of the screenplay, more specifically the characters, most specifically Matt. He is an imbecile, and watching him flounder his way through situations he could have avoided with the merest hint of common sense quickly becomes a chore. The film falls into a rote pattern of finding our hero being presented with a task, incredulously refusing it, and then sheepishly going along with whatever is asked of him. By the 45 minute mark his stupidity becomes absolutely exhausting. A certain level of disbelief is natural to expect from a protagonist who is thrown into a dire situation, but after he is drugged, walloped over the head, shot at and borderline sexually assaulted he still earnestly shouts things like “Is this some kind of joke?!” You tell me, Matt. 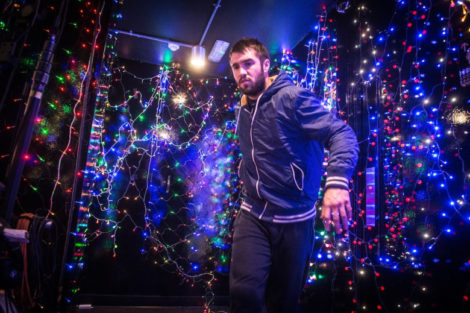 Thankfully, Matt wises (and toughens) up a little after the halfway point, and the film begins to show more of its cards, transforming from a thriller into a borderline psychological horror exercise. The nature of Matt’s mission reveals itself, and while it’s a fairly predictable conceit it does have a modern and eerily believable ring to it. These last 20 minutes, when the goal is clear and the clock is almost done ticking, is without question the best and most thrilling part of the movie.

Yet even here there are stumbles. Certain characters are left dangling, and a glaring plot hole reveals and resolves itself simultaneously in preposterous fashion. I could spend an entire other review talking about how this seemingly innocuous moment undercuts so much of what the movie is trying to say, but most viewers probably won’t mind it as much as I did, and the resolution is, for all intents and purposes, coherent enough. 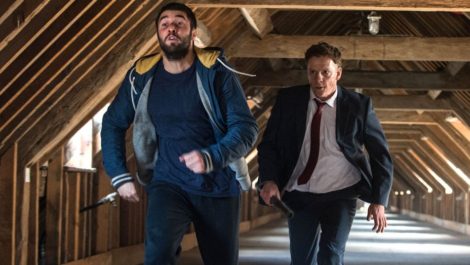 And indeed, “coherent” and “competent” are the best words one can use to describe Level Up: though stylistically engaging and tightly plotted, it can’t get over the fact that the person you spend the entire movie with just isn’t a very good character, and with a cast this small and a runtime this short a bad lead can be a kiss of death. Adam Randall is a fine director, but perhaps for his next film he should focus on making his players resonate as firmly as his stage.

Level Up is currently in select theatres. Check your local listings for info.

Christopher M. Jones is a comic book writer, pop culture essayist, and recovering addict and alcoholic living in Austin, TX. He currently writes for Loser City as well as Comics Bulletin and has been recognized by the Society of Illustrators for his minicomic Written in the Bones (illustrated by Carey Pietsch). Write to him at chrismichaeljones@gmail.com. Follow him on Twitter.