You are here: Home / Features / “Long Lost” #1 has the Creeping, Eerie Pace Every Horror Comic Needs

Long Lost #1 refuses to answer questions. Written by Matthew Erman with art by Lisa Sterle, the book sweeps through plot points without pause, giving new information on almost every page, with an art style that varies in tone sometimes panel to panel. The book reads like a horror film, giving us enough character details to make us care what happens to them, enough personality to keep us entertained, while never forgetting the lurking danger of the mysterious beast mentioned only once in the issue–and glimpsed only in shadow.

Piper is a serious, solitary woman, who wants nothing more than to be alone and unbothered, except for her little dog Pockets. She almost never smiles, doesn’t really seem to have anything going on at any given time, and ignores phone calls and texts from friends–despite the fact that she almost always has her phone in her hand. In fact, the only talking she ever seems to do is to Pockets. She has grotesque, abstract dreams full of blood, writhing bodies, and dark spaces, but they don’t seem to scare her. Then odd things begin to happen. Someone–or something–breaks her window with a weird object, wrapped in hair. When uprooting a potted plant, Piper finds what seems to be a piece of human intestine in the soil. And when when Pockets escapes the house and Piper chases her dog out into the woods, something follows her home. 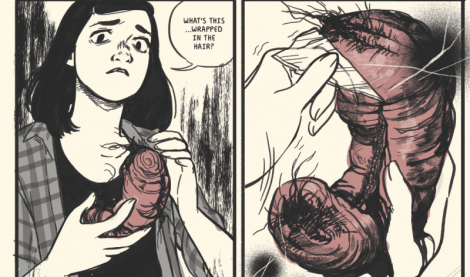 The book is kept intentionally unclear. On the first page, we learn that there’s a beast in the woods, and by the end, we even get to see it (assuming that it’s the same creature). But we don’t know its nature. We don’t know the connection of this creature to the weird things that happen around Piper–or why there’s so much hair involved. There are hints and clues: two little girls running through the forest, a reference to a mother not seen in more than a decade, talk of a person who has been waiting for something. There are so few details in each panel, you have to cling almost obsessively to the few hints you might get about Piper and her situation: a Seventh Seal movie poster above her couch, a reference to Songs: Ohia in her bedroom. Are they setting the mood or are they red herrings? It’s hard to tell.

It all functions surprisingly well. It could be easy to lose a reader with a pace this slow. There are lots of puzzle pieces, and none of them fit any of the others, but that’s one of the joys of these kinds of stories. We get to find the rest of them as we move onto the next issue. It’s easy for comics to want to give us a lot in the first issue, just to keep us from giving up on a slow-moving narrative, but Erman settles resolutely on his own pace, giving us only enough to make us ask the questions that he may or may not answer later.

While Erman sets the pace, Sterle’s art sets the tone and carries us through the book. Rendered almost completely in grayscale, her use, or lack thereof, of color suggests to us how to react to each scene without telling us what to expect. The opening pages, set in the woods, in the dark, are heavily shaded and ominous, while her linework inside Piper’s home or outside in daylight is neater, more stark, drawing a distinct line between the two worlds that exist in the story. Panels overlap together in the dream sequences, the unusual, often unrelated images connected by strands of hair or oozing blood that filters from one panel to the next.

Sterle’s got a way with faces, and even someone as intentionally inexpressive as Piper remains interesting to look at. When we finally meet Frances, the friend who is continuously trying to get a hold of her, as she rides a bus to Piper’s house, we find someone completely different, with wide and varied facial expressions and even a kind of cartoonish quality. She actually devolves into a big-headed chibi character at one point, complete with a Sailor Moon-style wallpaper background of puppies and hearts. The diversity of character expression makes even moments of dialogue, with two characters seated and not in any particular motion, when spooky things aren’t happening, a joy to look at and engage with, a skill not every artist has.

The trick to Long Lost will be its momentum. It’s done a lot of work to establish a tone, but its pace, very slow and steady, has to keep driving forward with purpose. It would be easy, now that we have what we can probably assume are the main players, to draw out the narrative and take more time on it, but that would probably be a mistake. With the secrets of the story held so close to the vest, the book will need to work hard to maintain the mystery while continuing to feed us the little chills we need.

For info on Long Lost, check out the comic’s Facebook page.