You are here: Home / Features / Made Men is Too Poorly Stitched Together to Stand On Its Own

There’s this Comedy Bang! Bang! bit where Scott Aukerman is telling Reggie Watts about some new films he’s going to be in this summer. All of them are named after an innocuous phrase that they take extremely literally, like An Apple a Day, and as Aukerman goes on they get more and more absurd. I bring this up because lately I feel like a curious number of comic pros saw that sketch and decided to apply it to their pitches and now we have a whole wave of comics where the creators thought of a play on words first and then built a concept out of that, beginning with Sex Criminals, which debuted almost exactly a year after the sketch.

We’re at a point where the vast majority of pop comics come out feel like they’re built backwards, beginning with a clever joke title for a Frankenstein’s monster of a pitch. Some of these titles, like Running Blood, were self-admittedly born out of jokes and that makes them feel more organic, a natural collision between self-aware humor and accidental seriousness, in turn making the stitched together the seams of the pitch (it’s a getaway caper where the driver is a vampire, so he’s literally “running blood”) less glaring. But Paul Tobin, Arjuna Susini and Gonzalo Duarte’s Made Men is a little harder to parse out because it takes itself so damn seriously with seemingly no awareness of its inherent absurdity, even though in this case the “Frankenstein’s monster of a pitch” phrase is quite a bit more literal, as the comic clumsily stitches together crime revenge and mad science tropes.

Made Men is committed enough to avoiding that absurdity it actually starts with a phenomenally brutal massacre. Jutte Shelley and her police squadron are called out to a robbery in progress, only to realize too late that it’s an ambush. They’re viciously gunned down from all angles, and even blown apart by landmines, before they can get a single shot in against their attackers. But luckily it turns out Shelley is actually a Frankenstein, and has been consuming a “workout potion” she made using a stamina strengthening recipe Grandma Frankenstein wrote down, and though Jutte says it only heals her “somewhat,” it’s enough to bring her back to life after being shot in the head and chest several times. So Jutte pulls herself together (ha) and throws the corpses of her teammates in her van, driving all the way to the hospital before she realizes they’re pretty fucking dead and a hospital won’t be able to help them, but maybe she can if she’s willing to give in to the family practice she’s avoided all her life.

If Tobin leaned into how deranged and ludicrous Made Men’s core premise is, it would be a far more interesting and addictive comic. Rick Remender and co’s “Frankencastle” Punisher arc is a perfect example of how well a juxtaposition of the seriousness of vigilante procedurals and the giddiness of mad science can work but Tobin and his collaborators struggle to find a balance of those elements here. Take that “workout potion” moment, for instance. It’s hard to take the idea of a “workout potion” seriously, particularly when the protagonist got the idea from motherfucking Grandma Frankenstein and maybe Tobin didn’t plan on it being taken so seriously, but Susini’s art, with its natural grittiness and the uniform sternness of every character, makes it impossible to view it as anything other than utterly sincere. Remender’s frequent collaborator Tony Moore is a master of modern horror because he can makes pages that are both terrifying and fun and a lot of that comes down to the looks on his characters’ faces, making him perfect for these kinds of stories where brutality must share space with gothic seriousness. But take a look at how Susini draws the faces of Made Men, both living and dead:

Jutte is the only living character here and yet she’s got the same glassy eyed doll stare as the corpses around her. Susini seems to only be capable of drawing her as a grimacing hardass or an emotionless automaton. It’s as if Reanimator was remade with Benedict Cumberbatch replacing Jeffrey Combs. The homogeneity extends to the creature designs as well, with the reveal of Jutte’s “made men” team not carrying much weight since they inexplicably look almost exactly like their assassins. Granted, they’re revealed in the gray, sinewy shadows Duarte’s coloring favors, so perhaps their fuller reveal will show there’s a lot more monstrosity than their debut at the end of this issue lets on.

It may seem unfair to criticize Made Men for what it isn’t but the problem is that there simply isn’t enough in this debut to really even get a sense of what Tobin and company want this comic to be. Going into it, I thought it might become a CSI: Monster Squad concept where the dead policemen are resurrected and returned to the force but aren’t able to fit in, yet by the end of the issue the police elements seem to fall away altogether for what already looks to be a fairly predictable undead revenge story with crime dressing. The family mythology elements Tobin sprinkles throughout Made Men aren’t half as interesting as he seems to think they are, mostly because he doesn’t actually seem to have much passion for the original Frankenstein. Which is too bad because a story applying the inherent fear of ego in scientific advancement at the heart of Frankenstein to modern fears of giving super weapons to police would be very welcome right now. 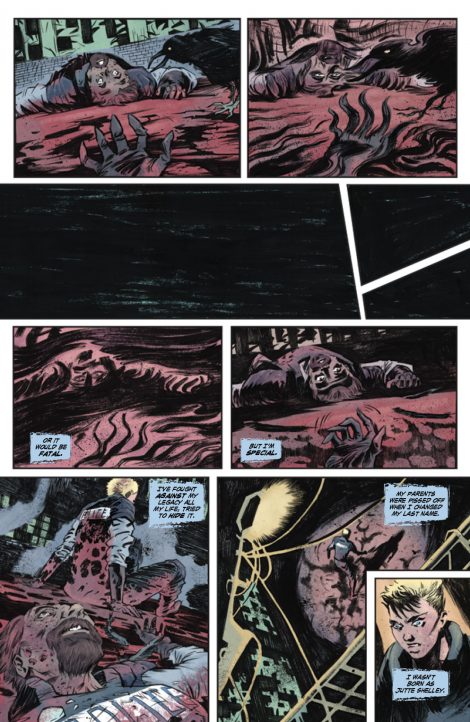 In time, maybe Made Men will feature more of that, and explore the irony of a Frankenstein descendent becoming more like the family’s monster than her ancestors. But right now the best way to sum it up is to paraphrase what Reggie Watts said to Scott Aukerman on Comedy Bang! Bang: “It feels like you guys came up with the title first and worked your way backwards from there.” Clever as the conceit of a modern day Frankenstein leading a group of “made men” to get vengeance is, if Made Men wants to stand out, it needs to start looking a little less dead and a lot more lively.