You are here: Home / Features / My Life as a Zucchini is an Uncynical Take on the Orphanage Story 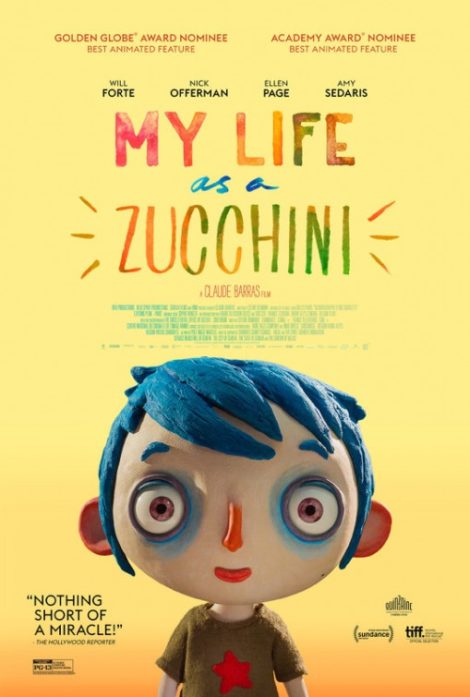 My Life as a Zucchini looks like a children’s movie. The stop-motion film features characters, mostly children, with big heads and long limbs, round eyes and mouths, and oddly-colored hair. The title character looks vaguely like he came out of one of Tim Burton’s later attempts at an animated film, with blue hair and odd, bruise-colored bags around his eyes. Living in a world the colors of elementary school classrooms, they strive to understand each other and the circumstances they live in while also participating in childish shenanigans and dealing with the various happinesses and sadnesses that come with growing up.

But the film is also about things that children deal with in so many places, but which we rarely talk to children about. The kids in this film live in an orphanage, but most of them are not orphans. As Simon, one of the longest residents of the orphanage, explains, many of them have parents but have been taken away from them: they are the children of junkies, molesters, and abusers; one child had her mother unexpectedly deported and hopes that she will someday be able to come back for her. Another child, whose parents are dead, lives there in resistance of living with her aunt, who only wants to take her in because the state will pay her to care for her. The film, rated PG-13 in the U.S., exists just as much as a desire to talk about the realities that we try to shield children from as it does about the children who live those realities and therefore cannot be shielded.

My Life as a Zucchini, or Ma Vie de Courgette in the original French, follows the story of Zucchini (a pet name his mother has given him), a young boy who lives with his alcoholic mother. We meet him in the first scene playing in his attic room with only a raggedy kite and his mother’s beer cans for toys. After making too much noise, his mother is on her way up the attic ladder to presumably beat him when, terrified, he slams the hatch down onto her head, accidentally knocking her to the floor and killing her. He is taken by a kindly police officer, who he comes to befriend, to the orphanage where he meets several other children. They eat, sleep, go to school, go on excursions, and play together. Each child has their traumas and backgrounds, each with their own compulsions and triggers. Almost all have given up on the idea of ever being adopted or going home to their parents.

The film is quiet in the way it deals with the issues of child abuse and neglect. The children are often frank about the things they have lived through and the ways they have been treated, in the ways that children often are. While they perhaps don’t always know the words for what has happened to them, or what has happened to those around them, they do understand the effects these events have had on their lives. And just as they are all marked by their experiences, they are also still children, who have priorities that perhaps might not fall in line with those adults might expect of them; they gossip and tease and play pranks and go on adventures, and they don’t generally define themselves by the fact that they live in an orphanage.

In fact, the children are all surprisingly, and honestly, childlike, both in their innocence and in the ways they have come to interpret things about the world that they don’t yet understand. When two of the adults become a couple, and subsequently find that they are going to have a baby, the children have prolonged discussions about how sex works and how babies are made, with Simon sharing and spreading incomplete and inaccurate information with all the confidence of a child with an audience. It’s an amusing, sweet moment, and feels terribly authentic, in a way that films about children often don’t.

Though some of the themes are heavy, others would be easily grasped by children: issues of family, self-worth, love. It is a film meant for kids to watch, as much as it’s meant for adults, and it doesn’t make the same mistake that a lot of “family” movies do in underestimating its child audience. Filmmakers and showrunners seem to be waking up to the fact that children are smarter than we think they are and that they understand more than we think they do. It is also perhaps naive of us to think that children aren’t exposed to unsavory things all the time, even if they maybe aren’t all as horrible as some of the things Zucchini and his friends go through. 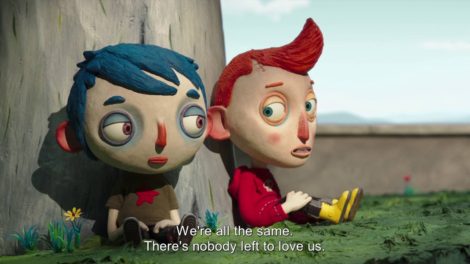 It’s a romanticized vision of life in an orphanage, with a sweet headmistress, a lovely aide, a kind teacher, and an invested police officer who all want what’s best for these children, with no ulterior motives or real trials in providing for them. The children are well cared for and offered as many opportunities as many other children probably are (including an overnight trip to the mountains to go skiing).

Considering the potential child audience, maybe it shouldn’t be a surprise that the film is bittersweet in its lack of cynicism. Some of the children get adopted; most of them don’t. But even so, every child gets a certain happy ending, even if that happy ending is only continuing to live at the orphanage with people who care for them. There is no other possible ending, of course. The children are a family and therefore must, for the most part, stay together. When the baby is finally born, they ask if he’ll live at the orphanage with them, and when told he won’t, they insist that his parents abandon him so that he can. If that isn’t a testament for the tiny utopia My Life as a Zucchini builds in the orphanage, I don’t know what is.

Elizabeth Brei grew up in Chicagoland, once worked at Disney World and has a cat named Moo. She holds an MFA from San Diego State University and can sometimes be found on Twitter @peachchild grumbling about kids these days or talking about Sailor Moon.