You are here: Home / Features / On Depression Quest

Author’s Note: It’s an ugly time to like video games right now. Recently, there have been campaigns of vitriolic hate and harassment against women critics, game developers, and their allies on some prominent corners of the internet. Games writing and the new wave of indie development along with it feels under siege to a lot of people right now. There were some specific triggers that caused these events to happen when and how they did, which other people have explained in more detail than I’m going to go into here (see the links above). In general, though, what seems to be happening is this: the culture of video games has been changing for quite some time, and some people are not handling it well. One of their targets has been a game designer named Zoe Quinn, one of three people behind Depression Quest, a text-based interactive fiction game meant to capture the experience of living with major depression. Recently, I downloaded Depression Quest and played it, something I’d not yet gotten around to actually doing despite my interest. I’m writing about that experience here, not to try to gain publicity off of the back of controversy, but because it seems like the best thing I can do to support valuable voices in gaming is to share what they’ve created and to see how it stands on its own merits. Gaming culture is often toxic, and I welcome change as quickly as it’ll come. But the existence of titles like Depression Quest makes me hopeful that games themselves are the best they’ve ever been. 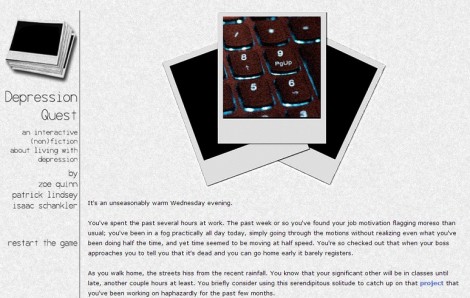 The truth is, I’ve been afraid to play Depression Quest. I’m not usually one to worry about trigger warnings, but the idea of playing a game that worked to simulate the experience of having major depression made me uneasy. The opening screen, which included a personal note from the developers along with said trigger warning, did nothing to ease my apprehension. The background crackled with slight audio static over the black-on-gray screen. After living so near depression my entire life, was that a mindset I really wanted to dive into? Would this be instructive, or just painful?

Structurally, Depression Quest: An Interactive (non)Fiction About Living with Depression, a small indie project developed by Zoe Quinn, Patrick Lindsay, and Isaac Schankler, is a simple text-based adventure game. It casts you as a sufferer from depression in their young to middle adult life, giving you choices on how to approach life situations in light of your illness. You choose, through prompts based on the sections of prose that form the core experience,  how to interact with your significant other, Alex, how you deal with your job, and how you try to care for yourself. The game marks your progress, as it were, with informal messages on the bottom of your screen about your mental state and the treatment you’re seeking. A somber soundtrack plays in the background, fuzzed out with intermittent static that becomes more and more demanding the deeper into illness you are. The other main feedback system comes from the restriction of certain choices based on your level of depression—the more depressed you are, the fewer choices are available to you, which makes it that much more difficult to improve your mental state and your relationships.

A game this personal invites confessional writing, so let me say that I am writing about this as someone who suffers from generalized anxiety disorder, a disease that shares a number of symptoms and treatments with depression. I have suffered depressive episodes, a few (thankfully mild) panic attacks, and general uncontrolled feelings of anxiety and distress. I’m also writing as someone who has multiple immediate family members with depression and other mental illnesses. Friends, too. I’ve been on medication for my mental illness since I was 12, and I have it mostly managed in my day-to-day life. Still, it affects my day-to-day life in so many ways that I probably don’t even notice them all. I have to be mentally prepared for social settings or I shut down. Turmoil in my close relationships can unlock incredibly deep and hard to escape anxiety spirals that can last for days. Every once in a while I’ll have a day where the world just feels too intimidating, and I’ll stay in bed until late afternoon (sometimes I also stay in bed ‘til late afternoon because I love sleeping, but that’s a different problem).

So I’ve been afraid to dive into Depression Quest. It’s summer, and summers are always hard for me. The oppressive Texas heat, combined with bad associations with summers past, always threatens to leave me depressed and feeling smaller than myself. I didn’t want to play this game and find that it had pulled me into a headspace I didn’t know how to crawl out of. This experience had the potential to be instructive. It could also be painful.

As it turned out, Depression Quest was both instructive and painful. I found the game deeply enthralling, largely thanks to its engaging style of prose, which felt like a hastily scribbled journal entry, honest and without frill. The writing had occasional noticeable typos, possibly a product of the sheer volume of text needed to create a game like this, but they also felt like they might have been purposeful, little nods to the way you write when it’s just for your own peace of mind. The choices you make feel like you have real weight and consequence, and the way the game responds to them felt organic and realistic. The outcomes of my decisions were not always what I expected, but they all had a verisimilitude that at times startled me.

I did my best, playing Depression Quest, to roleplay realistically, to respond as I thought I might in the situations presented. And the situations—feeling isolated and abandoned on a night when you don’t feel social, explaining a bad episode to a significant other, dealing with the pressured but misunderstanding support of those close to you—were uncomfortably close to real situations I’ve experienced. I’m not sure how someone without a history of mental illness would be affected by this game, but I have to imagine they’d be moved, though perhaps not as much as I was. After an hour with the game, I had to take a break in order to prevent myself from crying. For a day after my playthrough, I felt a bit more frail than usual (though not in any way that proved harmful to my mental health). 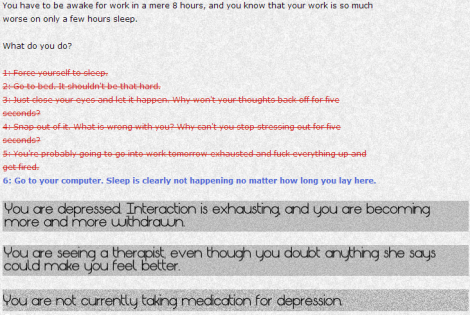 By going to therapy, getting on medication—steps I’ve taken and found to be effective in my own life—my character was able to improve significantly in the time I spent inhabiting them. More choices started opening up to me, and the static in the background quieted to a gentle intermittent hum. My character never got completely better, though. Some choices stayed closed, marked through with a thin red line, no matter how hard I tried to improve, an ongoing reminder that mental illness is a settled and real infirmity beyond the sum of your choices in treating it.

The central choice mechanic, then, is a great way to systemize some of the things people often have the most trouble understanding about depression. Depression is, for many sufferers, not something that can be effectively combated because by its very nature it limits your choices in fighting it. The onslaught of doubt and despair can feel like a physical illness, a stone gremlin sitting on your chest, weighing you to the bed. It can make it difficult or impossible to make choices you want to make. Actions under deep depression are actions taken under duress, and this system captures that experience remarkably well. People are critical of this game because of the simplicity, because of its reliance on text, and I’m sympathetic to those criticisms to an extent—the game functions on some of the most basic principles of game design—but those same elements are what gives it its power, lets Depression Quest and other so-called “empathy games” like it communicate vividly. It’s a minimalism that strips away the detritus, focusing on a singular core feeling and the experiences that accompany it.

Simulating empathy in a gameplay environment can be challenging, and effectively communicating the lived experience of an interior disorder, even harder, but by going back to basics and relying on the strength of text and choice, Depression Quest does a powerful job. Many people with depression and other mood disorders, myself included, find it difficult to articulate what exactly we’re going through, which can further isolate us. This game could be a useful tool to speak to those realities, and if you have depression or know people who do, this is worth your time. You can download it for free on Steam or on a pay-what-you-want basis from its website (a portion of the proceeds are donated to the National Suicide Prevention Hotline).

Jake Muncy is a freelance writer, editor, and poet living in Austin, TX. In addition to function as Loser City’s Games Editor, his writing appears on The AV Club, Ovrld and anywhere else he can convince people to post it. You can contact him by email or twitter, where he tweets regularly about video games, the Mountain Goats, and sandwiches. He has very strong feelings about Kanye West.