You are here: Home / Features / Out from the Past: Southern Bastards Masterfully Explores the Complexity of the South

Certain cities have mythology and character that carry over to people’s expectations of their citizens, but no other region is as misunderstood or conflicted as America’s south. As the Jasons Aaron and Latour both explain in their afterwords for their new series Southern Bastards, the south is burdened with heavy cultural expectation and stereotypes that are simultaneously true and untrue. To put it in Aaron’s words, the south is “a place you can love and hate and miss and fear all at the same time,” placid and savage all at once and while I was born in Charleston, South Carolina myself, like Aaron I can love being from the region but remain content to only revisit it through works like Southern Bastards.

Aaron and Latour immediately craft a mood that befits that contradiction as Latour sketches scenery that is mysterious and beautiful, though muted in color and seemingly stuck in the amber of time. This is a world where roadways are littered with competing hellfire and damnation proclamations from an assortment of churches and the trees lean out with Spanish moss coated limbs, all emerging from a muggy darkness. There’s a sad humor to it all, from the dog taking a shit next to a road sign demanding “no dumping” to the self-deprecating barefooted Confederate soldier that makes up Craw County’s Runnin’ Rebs mascot. As much as Southern Bastards is Aaron’s conflicted ode to his southern origins, the book is defined by Latour’s sepia and half-tone peppered aesthetic. Latour’s style is loose but sharp, a fitting representation of the ramshackle architecture of the south and the swampy foliage looming from every corner.

Aaron and Latour want the reader to understand that Southern Bastard’s protagonist Earl Tubb is a man who is proud of his past but desperate to escape its clutches; each mossy tree limb is reaching for him when he returns home to collect his ailing uncle’s things, every street corner is a reminder of how much and how little his hometown has changed. Aaron has always been strong with dialogue, able to craft unique voices for the casts he creates but also confident enough to let their silence express even more of the story, and Southern Bastards is no different. In red and yellow duotone, Latour illuminates the violent family history that Aaron has written to define Earl, and in the earthtone present that red sneaks in constantly. Long before it happens, you know Earl isn’t just familiar with violence but destined to be redefined by it before long. 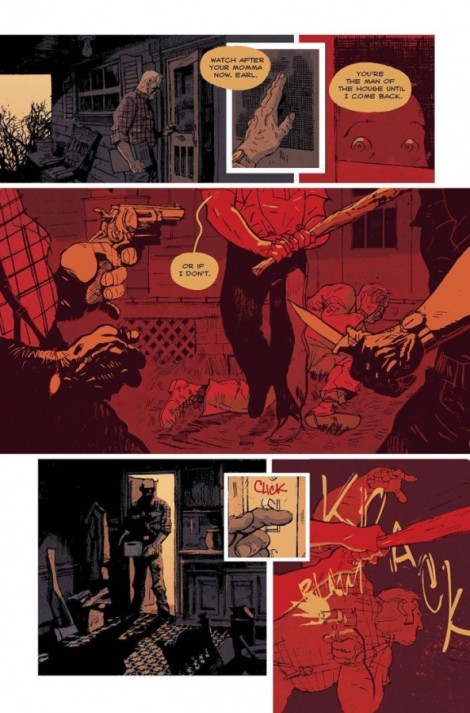 Though Southern Bastards‘ debut issue pulls from myriad Southern vengeance tales and cliches, Aaron and Latour’s passion for Southern life allows the story to carry more weight; through Earl, these two creators work out their own conflicted feelings about their past and love for a culture they know is as flawed as it is enchanting. Fittingly, the story really picks up when Early visits an unfamiliar BBQ joint and gets treated to the patent Southern hospitality as well as shady happenings that lurk beneath the surface of his hometown. Earl may say he “just comes for the ribs,” but the lines etched all across his face and the sag of his eyelids indicate he’s stubbornly fighting his own nature, hardened and scarred by the conflict waged internally over the righteous rage he tries to suppress.

Like David Gordon Green’s similarly volatile southern drama Joe, Southern Bastards isn’t trying to surprise anyone with its narrative but is instead hoping to showcase the tragedy of the inevitable, to wrench art from the sadness of a man who wants peace but always winds up causing pain. If Aaron and Latour continue to work this well together, there’s a strong chance Southern Bastards will soon be the moody Southern response to Ed Brubaker and Sean Phillips urban noir masterpiece Criminal, specifically the Last of the Innocent story, with which Southern Bastards already shares a similar theme of using small town “innocence” to cover up troubling darkness. Aaron’s Vertigo series also Scalped offered up an action packed and widescreen take on a similar theme, but this first issue of Southern Bastards is immensely promising for its intimacy and explosive potential. Where Scalped was a complex and sprawling story, Southern Bastards aims for the heart by scaling things down to the micro level, exploring the complexity of a region through the contradictory personality of a lone figure and the world he realizes he can never escape.

Southern Bastards comes out Wednesday, April 30th and can be found at your local comic shop or on Image Comics’ site.