You are here: Home / Features / Pass the Pastiche: Kennel Block Blues and Comics’ Addiction to Retreads

Comics doesn’t have a monopoly on “new” reimaginings of works from other media, but the past few years have certainly made it seem like hungry creators are looking inward for inspiration less and less, instead drawn to the appeal of a quickie make-over of an exciting hit from some other realm. The past couple years specifically have seen creators reconfiguring existing properties so we wind up with not one, but two concurrent works drawing on the new pop interest in penal systems with Zander Cannon’s Kaijumax and Ryan Ferrier, Daniel Bayliss and Adam Metcalfe’s Kennel Block Blues. While the former is pretty open about its Oz-influence and plays things straight, allowing for a visual disconnect of goofy kaiju operating in a very serious prison hierarchy, Kennel Block Blues is a much weirder beast, with a dizzying number of meta-elements at play. Narratively, Kennel Block Blues has a number of significant problems impeding it from being a truly notable work that rises above its influences, but visually, it’s such a spectacle that even with those issues, it puts most of its “twist on x work from y medium” peers to shame.

Ferrier’s script is purposefully familiar to anyone who has seen a prison movie in the last half century, except here the inmates are all pets, with the Jackson pen that is its setting populated by two rival gangs comprised of dogs and cats and their various allies. The lead is Oliver, a thoroughly irritating canine who is convinced his family is going to bail him out and he’ll be rescued, a flip of the prison flick standby of the wrongfully imprisoned convict who won’t shut up about his innocence. Oliver unsurprisingly ends up right in the middle of the war between the cats and dogs, with the dogs currently in a bad spot thanks to the solitary confinement of their leader. This is all business as usual and truthfully there is no real reason to focus on the plot, except as a vehicle for the wild style experiments of Bayliss and his colorist partner Metcalfe, who do remarkable work bringing the vision of this story as a kind of Shawshank Redemption for the Looney Tunes set to life.

Metcalfe immediately proves the value of his coloring with the initial, abrupt shifts between the sing-song world Oliver is naively living in and the drab, grey reality he can’t come to grips with. The decision to juxtapose vivid technicolor looniness with flat earth tones isn’t exactly shocking or unexpected in this kind of story, but Metcalfe still manages to imbue the real prison sequences with otherworldly colors that are muted and grungy rather than completely lifeless and desolate and Colin Bell’s lettering helps emphasize this too, as the dialogue shifts between gritty captions and bright, melodic musical numbers framed by musical notes and bold block lettering. The inmates around Oliver still retain their color, but there is a rattiness to it that matches Bayliss’ own switches in characterization, as the rounder, more gregarious cartoon iterations of the inmates give way to gruff, worn down, more “realistic” representations. Bayliss also expertly weaves in more iconic sequences showing off blueprints and insertions of contraband, reminiscent of heist montages but more suited to the comics medium, where time can be more deliberately slowed down and dimensions are more malleable. You could remove all of the dialogue and Kennel Block Blues would remain a great, engaging visual feast, spritely and playful and inventive. 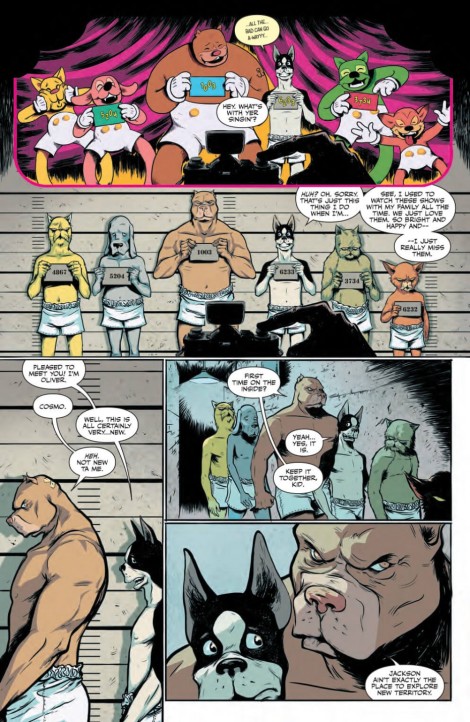 But the dialogue and the story are unfortunately the chief things holding Kennel Block Blues back at this point, not because Ferrier isn’t a competent writer but because he seems too beholden to his influences, which also ultimately bogged down his prior Boom! series Curb Stomp, itself a gender flip of The Warriors that started out strong but lacked momentum by the end. KBB is kind of the opposite in that its narrative is so generic it holds back the visual momentum of the first issue. It’s hard to really care about Oliver as a character because every single one of his traits is rooted in some other work, from a brief origin recap that seemingly references the lost dog movie Bingo to the Chicago meets Song of the South musical digressions he makes constantly to his status as a patsy for the cats which is a plot point shared by an untold number of prison works. By design, a lot of the characters in the first issue of KBB are cliches and cardboard cutouts but why even design it that way? Why not make your narrative as bold of a reimagining as the art?

Not to pick on Ferrier, but this is also a significant issue in modern pop comics. Flipping through Previews is frequently an exercise in seeing what hit works creators are awkwardly merging, like an entire industry of wannabe Frankensteins who pilfer not from graveyards but from summer movie trailers and pilot season renewals. Comics as an industry likes to tell itself over and over that it is a medium of infinite potential yet so much of what gets cranked out and bought is just some photocopy of a photocopy, the differences only coming from what pop culture building blocks are getting used this time. So a work like Kennel Block Blues stands out not for its imagination but for what could have been had the imaginative qualities of it been used in service of a more interesting and unique narrative. The technical caliber is high enough on Kennel Block Blues, though, that it makes you hope that in the future the creative team will aspire more towards a reimagining on the level of Criminal: The Last of the Innocent rather than Technicolor is the New Orange is the New Black.

Kennel Block Blues #1 is out this Wednesday, February 3rd from Boom!