The ties that bind in Penny Dreadful are a strange thread. The company of heroes isn’t full of nice people — Vanessa Ives has committed selfish actions that doomed others, Ethan Chandler took part in the genocide of Native Americans, Sir Malcolm Murray killed and abused his way across Africa in the name of “exploration,” and that’s just half of the cast. But they’re tied together by shared horrors and the realization that no one but them can understand the dangers they face. And now that company is falling apart.

In the morning after Dorian Gray’s fete, the damage to the heroes is clear. Sir Malcolm is a twisted shell of his former intense, reasonable figure. Timothy Dalton sells every line of Malcolm’s brainwashed, uppity dismissal of Vanessa’s troubles, while pathetically invoking the unity of the company. It’s clear how much Evelyn Poole (Helen McCrory) warped his mind when the atheist scientist Victor Frankenstein (Harry Treadaway) is the one who stands up to him in defense of Vanessa’s occult prowess. So, seeking solitude, Vanessa and Ethan head out of London to the moor, to the Cut-Wife Joan Clayton’s house that she gave to Vanessa. And then Penny Dreadful takes an odd turn: For half of the episode, it plays out like a Gothic domestic comedy.

It works, mainly, because Eva Green and Josh Hartnett have incredible chemistry together, and John Logan gives the two clever dialogue to play off. Miss Ives and Mister Chandler’s relationship is one of the best elements of Logan’s writing. Even though there is a clear attraction between the two, they are more confidants and protectors of each other that potential romantic partners. Ethan is devoted to helping her, and Vanessa trusts him. It makes the idea of the two getting together unlikable, because their platonic companionship is compelling. Even with the dark turns their stay on the moor takes, there’s some great interplay between the two. Vanessa’s pot smoking habit throughout the show pays off in great comedic ways with the two of them stoned out of their minds telling childhood stories. Again, this is a dark supernatural show, and it made that scene work. When the two finally do kiss for the first time, during lightning storm that bursts through the house, Vanessa pushes him away, saying “We are dangerous.” Now, is Vanessa talking about her and Ethan, or her and the demon inside of her that seems to come out when she loses control and has sex? Based on her unhinged look, it might be the latter. Which makes their final scene in “Little Scorpion” all the more unsettling. 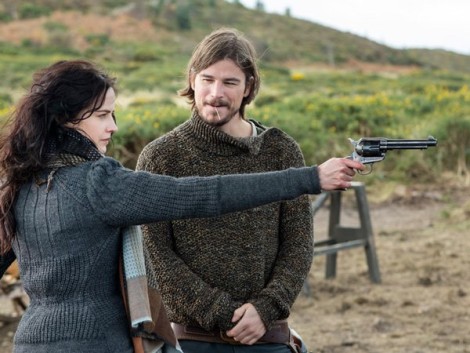 Vanessa takes out her book of forbidden spells and uses one to kill an old enemy in the area. Ethan finds out and quickly lectures her on how her soul is lost having given up her morality, but it’s also truly lost. The Cut-Wife said Vanessa would belong to the devil if she used that book. The full effects aren’t quite seen, but last season gave viewers at a clear look at Vanessa when possessed. Is her control over the demon gone?

This episode also gives viewers the fullest look at Ethan’s lycanthropy. Thanks to Sembene (Danny Sapani), Ethan has a living witness who’s willing to fill in his missing gaps. Most interestingly, Sembene seems familiar with the idea of werewolves, and doesn’t consider Ethan a monster.  Of course, he still hasn’t told Vanessa about it, even as he’s transforming on the moor and hunting down sheep, beyond a comment that she knows what he is. Still, he is most aware of his situation that he’s been since the start of the series, and seems to be trying to control his changes. And his wolfman form might be the most critical weapon in the fight against Poole and the Demon.

Ferdinand Lyle (Simon Russell Beale) and Frankenstein continue to work on the Verbis Diablo manuscript, revisiting the repeated phrase “lupus dei” or “Hound of God.” Going off last week’s look at Thiess of Kaltenbrun, who claimed to be that very thing and fought witches and the Devil as a werewolf, it does seem  like Ethan and his wolfing out are the key to dispatching the Nightcomers. Of course when Lyle dives into the idea of it all, he throws out an intriguing sentence: “The Demon, the Scorpion, the Hound, endlessly circling one another.” So maybe Ethan and Vanessa will not get together. And perhaps they might be more antagonistic toward each other in the future. Last season ended with Vanessa pondering an exorcism to purge the Demon from her, but that apparently didn’t happen. Maybe they are locked into an eternal struggle?

In the strangest development of the episode, Lily the Corpse Bride goes out for dinner with Dorian Gray, who’s taken an interest in her. Not after a bit of a tiff with Victor about her own independence. Victor truly is controlling her, treating her as half Stockholm-Syndromed pet and half science experiment. Even Dorian bloody Gray is commenting on Victor’s control over Lily — who would have thought Dorian would be a voice of reason? Logan continues to tease how much Dorian recognizes the resurrected woman. He calls Lily’s eyes familiar but not. It seems like he remembers her being Brona and is trying to figure out her change, but there is the slight chance that Logan is making Dorian ignorant of her identity like he confusingly made Vanessa. The two visit to Putney’s Waxworks, but  noticeably avoids the recreation of the Mariner’s Inn, Brona’s old home. They do catch the eye of John Clare the Creature formerly known as Caliban. And yet the biggest twist comes from Lily making a private stop at a pub and engaging in a certain kind of night work. Is her past profession as Brona bleeding through, as well as the manner of her death? Or has something malicious taken host in her reanimated corpse? Are Dorian, Victor or even John Clare safe?

The various struggles facing the members of the company are compelling and give the actors much to work with, but also come at a necessity with this season’s main narrative. Although Evelyn Poole is a more fascinating and singular antagonist than the vampire coven and its “Master” (all the hints toward Count Dracula, and yet no pay off), season one gave the protagonists a mystery and quest. There was a more driving element. Poole, beyond a few attacks to claim what she needs for her fetish dolls, is withdrawn and unknown for the most part to the heroes. Right now, with the company split and her possession of multiple fetishes, she’s in complete control. And with three episodes left in the season, undoing her advantage is going to be tough, and yet nothing is happening. It’s still a bit unclear what she’s seeking Vanessa for. To damn her? Vanessa took care of that independently? For the Egyptian apocalypse gods? Maybe, and this episode does hint that the cult for the gods is still in play, but that’s a long shot.

Beyond Vanessa damning herself, the biggest moment in this episode for the show as a whole is from Lyle, who brings up the Egyptian gods Amunet and Amun-Ra to Victor during their research. It’s the first time this season that the Egyptian element comes up, despite its grand importance in the scheme of things last season. Discussing the unnatural, Victor asks about vampires. Considering how separate Poole and the Nightcomers have been from the other antagonistic elements in the show, maybe they’ve been a side plot for the company against the bigger threat out there. And, if like in season one, the vampires are tied to the Egyptian plot, and the show sticks to its roots, Count Dracula might actually be out there, plotting a long game. With a third season of Penny Dreadful just confirmed, it’s a strong possibility.

But before all of that, there are still three episodes of season 2 left. With the cast scattered, distracted and increasingly doomed and damned, the endgame is unpredictable. The odds are in Poole’s favor, so what will it take to change that?

S2E5 “Above the Vaulted Sky”