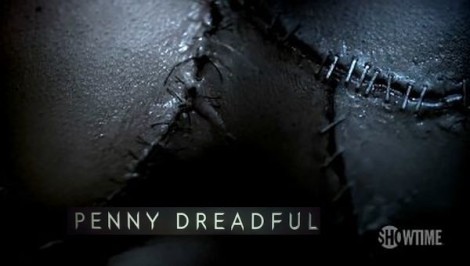 After last week’s flashback detour into Victorian witchcraft, Penny Dreadful returns to the main action, and pushes the story forward in big ways. “Evil Spirits in Heavenly Places” does some bait and switch with painful narratives, and even manages a bit of levity, and yet still manages to pull off an incredibly suspenseful final act.

The previous week’s story is quickly wrapped up with Vanessa (Eva Green) telling her companions about it, moving onto the biggest plot thread of the season: The Verbis Diablo. It seemed like deciphering Brother Gregory’s puzzle of the language would be drawn out over the season, but creator John Logan instead moves it along, with a large chunk solved before the episode’s end. It’s a smart move, allowing the characters to ponder the implications of the Devil’s memoir rather than spend time making minimal progress. And it fills in the heroes to what the viewers already know, that Vanessa is the target of “an eternal Satanic quest.” If the show keeps up the plot points from season one, that means a vessel to the goddess Amunet in a plot to unleash the end of the world. So that’s delightfully cheery.

But underlying the episode is a very subdued but fascinating theme of hunting. In a more overt moment, Sembene (Danny Sapani) admits to Ethan (Josh Hartnett) that before he came to England he was, in part, a hunter. Meanwhile, Sir Malcolm (Timothy Dalton) reluctantly accepts eyeglasses while examining the puzzle, the Great White Hunter finding his senses dulling with age. And throughout the episode the Nightcomers stalk our heroes, giving the episode a great sense of dread despite the lack of action. The final scene of the episode runs on suspense, waiting for the predators to strike at their prey. Between the sudden jump in action and seeing some expert hunters on our heroes become the hunted, it’s one of the best scenes of the season. Not quite up there with the gloriously indulgent and terrifying scenes at Evelyn Poole’s manor, but close. 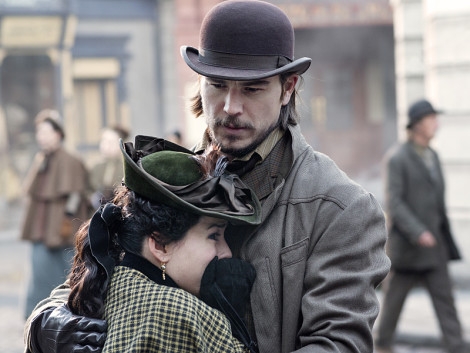 The lull in the action gives some space for a bit of character work. Ethan almost falls into a honeytrap from witch Hecate (Sarah Greene) but gets to show off observational skills rivaling Vanessa’s. It’s a great scene not just for Ethan, but for the show, avoiding what could be a long and frustrating deception plot for a sharp dismissal and identification of the enemy. Ethan even gets to bond with Sembene, whose background expansion and dry wit add some much needed depth in the writing to match Sapani’s intense performance.

The episode also gives Penny Dreadful its first real dive into comedy, of all things. Taking a break from witches and demonic memoirs, Victor (Harry Treadaway) enlists Vanessa to help him buy clothing for his “second cousin,” Lily Frankenstein AKA Brona the Corpse Bride. What follows is the perfect amount of awkward humor in a dress shop. Treadaway is far from bad as Victor, he’s quite good, but he’s very effective here. As with her scene with Rory Kinnear in the second episode, it seems that sharing the screen with Green brings out the best of the actors. Plus, after two episodes of bringing Vanessa’s torment and pain to life, seeing Green smile and give a lighter performance is both fun and a reminder of her incredible range. The weird love quadrilateral (well, love hexagon when Vanessa and Ethan are factored in…) definitely is in full affect, and based on Frankenstein’s invitation to Vanessa of having tea with him and Lily, might reach a disastrous outcome sooner than expected. It will be fun when Victor realizes that Vanessa met Brona last season.

The comedy isn’t limited to an awkward bit of shopping. It turns out that Sembene, aside from his hunting background, is also a talented dessert maker. Ethan was right, no one expected to hear Sembene say “buttermilk torte.” And then there’s the situational humor of immortal hedonist Dorian Gray taking  his latest paramour Angelique (Jonny Beauchamp) to…a table tennis parlor. How that will reflect on his portrait is near-impossible to imagine. The storyline, much like Dorian in general, feels disengaged from the main plotline and almost bereft of intrigue. Angelique for the second time in her appearances questions Dorian on his youth and how he achieves it. Maybe there is something there. 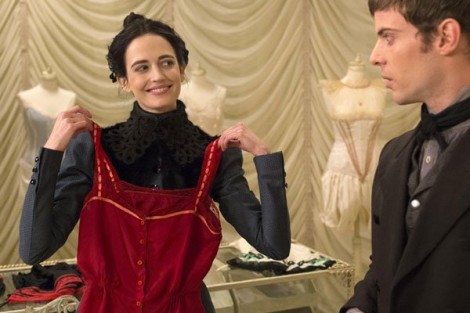 Outside of the character work, “Evil Spirits in Heavenly Places” continues to showcase the rich detail in which Penny Dreadful recreates Victorian London. This season’s been big on new locations, and the street fair Dorian and Angelique walk through is a feast for the eyes, even if it’s on screen for barely a moment. And Logan’s script dives into some other elements of the era, including feminism. From Victor and Lily’s conversation of the nature of corsets to Hecate’s concocted character, Logan shows no love for the gender repression of the era, and works great dialogue out of his disdain. Another clever touch is the leather half-mask one character wears to hide a disfigurement — a slightly cruder predecessor to the tin masks many World War I veterans took to wearing to cover up injuries from the fighting. Add to that the Putney wax museum where Frankenstein’s Creature works trying to expand to real life “freaks” and there’s a great look at the blend of public propriety and fascination with the obscene that permeated the era.

This episode is not big on revelations or big twists, but it does reignite the pace after last week’s flashbacks. It also shows that Logan has faith in his main story arc and isn’t going to waste time on long  deceptions. And he does this while also giving time for great character work and some levity — Victor and Vanessa at the dress shop will never stop being entertaining. The storylines aren’t converging yet, but from the way this episode ends, it seems that Penny Dreadful is going to get very intense very soon.