Questionable Comics is a series where Dan Hill surveys professionals from every corner of the comics industry about their methods and experience. Our first guest this week is RJ Casey, who works for Fantagraphics and contributes to the Comics Journal. He is also the co-publisher of Yeti Press, which concludes its six year run this June.

For Yeti Press, I just sent our final issue off to the printer, to be released in June. Also getting everything organized for Yeti Press’s summer which includes TCAF, Linework, CAKE, and anywhere else that will have us.

My wife and I bought a house recently, so my new workspace is still under construction. I’ve got a small desk that really only holds my computer and a legal pad, some drawings from various artists scattered about the walls, and a mini basketball hoop on the back of my door.

Absolutely nothing. I get distracted very easily, so I prefer silence when I reading or writing.

“Deeds, Not Words.” I learned that little gem from Mike Norton. I’m all about that action, boss, and get a lot of satisfaction when things are followed through on. That’s the one that comes immediately out the top of my head, but I’ve been lucky enough to get advice from many, many people whose work and ideas I admire, like Paul Hornschemeier, Ivan Brunetti, Kristy Valenti, Chris Eliopoulos, and Gary Groth.

Unfortunately now I only get in the zone if inspiration hits. There were several points in my life where I wrote every single day, and I’m sure there will be in the future as well, but writing for me now, whether it’s comics or about comics, is more of a passion and pastime. I’m fortunate enough right now, and have somewhat of a peace of mind, to wait for the muse. That surely isn’t good advice to other writers looking to get into writing comics or criticism, but it’s where I’m at right now.

When I’m writing comics, it’s always full script, but with varying degrees of detail. I usually only write stories if I know who the artist is going to be so that I can cater the story to their strengths.

I wish I was more patient. My writing usually comes out all at once. I do this because I want to get all my thoughts on the page before I forget them or lose interest in the topic. I think this usually makes my work passionate and humorous, but I get worried about how it stand up on its own in a few months, or even weeks.

Weekends, usually. I will fill up pages of notebook paper with notes throughout the week with book notes or story ideas. Then I’ll try to assemble everything once the weekend rolls around.

In terms of writing comics, there’s never been anyone better than Harvey Kurtzman. I look to his work to laugh at, to study from, and to marvel at whenever I can.

My favorite writer about comics is R. Fiore. I love Bob Levin too, but those guys seem semi-retired at this point. Lately, I’ve found writing by artists about other artists very interesting and inspirational. Not every artist has the critic’s eye, but when they do, like Katie Skelly or Anya Davidson, it makes for good reads. There are a few handfuls of good writers spending time critiquing and reviewing indie comics right now, and I’m grateful for that. I just like to keep everyone on their toes.

Eric Grissom is a writer at Action Lab and the co-creator of a number of indie comic series, including Animals, Deadhorse, Gregory Suicide and the recently released The Mark.

Recently I finished putting together an illustrated poem I wrote with art by Claire Connelly called The Mark. I know, I know, everybody loves poems. Finger on the pulse and all.

The last chapter of Deadhorse, the comic I do with artist Phil Sloan, also remains to be written. I’ve been avoiding it in some ways I think, but I won’t truly be free until it’s finished. There’s a part of me that feels once I put the last word in place I’ll cease to be, so when you finally read about the book’s release please send flowers to my grave. I’ve got a few other projects that are with artists in various stages scattered about, but none I can talk about at this point.

I’d love to tell you that I write inside the hollowed skull of a fallen god, but it’s pretty much just a desk. I write in my office down the hall from my bedroom surrounded by books and papers and framed photos of art and imagery that provide some form of inspiration or joy.  There’s also coffee.

Music is a big part of my life and that includes writing. I can’t ever listen to anything with words as that becomes too distracting. On a few occasions I’ve broken this rule, particularly with Gregory Suicide where Judee Sill’s “Jesus Was a Crossmaker” and Van Morrison’s “Astral Weeks” found themselves on repeat.  In almost all other cases though, it’s instrumentals and soundtracks. I’ve got a writing playlist that I go to that includes artists like Max Richter, The Rachels, Sinola Caves, Clint Mansell, Disasterpeace, Jonny Greenwood, Wagner, Mica Levi, Krzysztof Komeda, AIR, Cliff Martinez, Ennio Morricone, and way more that I can list, but I have likely put some of you to sleep already.

“Don’t ever release anything with an asterisk.”

Meaning, don’t ever send anyone anything that isn’t ready. No matter how excited you are to share it.  If you find yourself having to ever say, “oh, ignore this part here,” or “this will look so much better once it’s finished” you probably shouldn’t send it. Whether it’s to an editor, or an artist, or whoever. You get once chance.

Weekdays I get up at 6 in the morning and write for an hour and a half before life wakes around me and carries me with it. To get to where I need to be, I will always re-read the current script I’m working on to get me back in the right headspace. Aside from that, it’s mostly just sitting down and doing it. 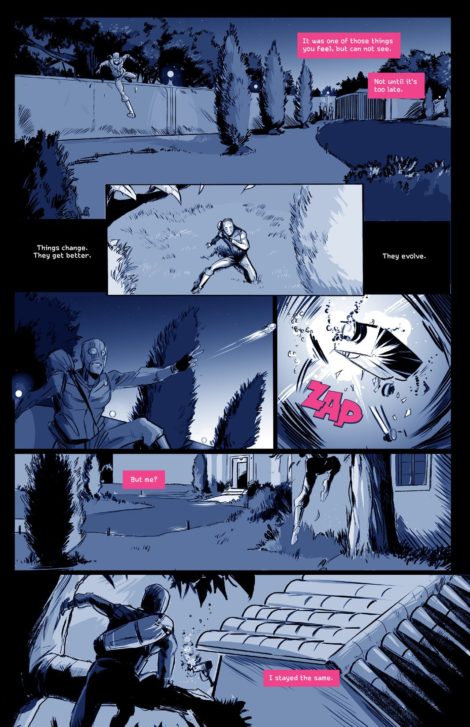 A page from Gregory Suicide, Eric Grissom’s comic with Will Perkins.

Almost always full script. On two occasions I have worked using the Marvel Method. In both cases with Claire Connelly. One of the books was The Mark that I had mentioned earlier and the other is something we’ll be releasing at some point in the future. Full script is definitely where I am most comfortable. Seeing how it lays out in my head is something I have to do anyway in order to build the story. Once an artist has a script of mine however, I always let them know that they are free to move things around as they see fit. If there’s something I feel is really important to the story that has to be reflected in the art I will include a note in the script.

Aside from everything, I would say the biggest obstacle I face is confidence and anxiety and depression and the poisonous self-hatred jean jacket I like to throw on to keep me warm at night. It’s covered in patches that remind me I’m a failure and a fraud and that nobody cares. I should really get rid of this thing.

I also wish I didn’t hate self promoting as much as I do, because there’s been many times I think I could have done more to promote a book.

Mornings. It’s the time of day that I am most focused. I don’t have the day’s experiences weighing me down. I am at the most rested I’ll ever be. It’s also the time of the day when it’s just me. My family and clients are asleep or dreaming and it’s just me and the words.

I find inspiration everywhere, whether it’s film or music or science and nature or everything in between. Film in particular is a huge influence on my work, maybe more so than comics, but since your question specifies my field, I’ll stick with writers and comic artists. In no particular order, here is an incomplete list of those whose work has inspired me: Jack Kirby, Steve Ditko, Grant Morrison, Neil Gaiman, Dan Clowes, Alan Moore, Dave Gibbons, Dave McKean, Edgar Allan Poe, Kurt Vonnegut, Jean Shepherd, J. K. Rowling, Gabriel Ba, Fabio Moon, Alejandro Jodorowsky, Moebius, Claire Connelly, Becky Cloonan, Matt Kindt, Jeff Lemire, Rick Remender, Matt Fraction, Charles Burns, Jim Starlin, and so many people I am probably leaving off that I will now spend the rest of the day worrying about.