You are here: Home / Features / Revenge of the Mekons is a Loving Ode to Punk’s Greatest Unsung Heroes

You could spend a lifetime debating which first wave punk band was the most important and never approach any kind of consensus. I’ve always harbored a soft spot for the stragglers and also-rans but even with that weakness in mind, I don’t think it’s much of a stretch to suggest the Mekons as the prime contenders for the throne. A ramshackle collective that arguably helped invent both post-punk and alt-country, two of punk’s most viable children, the Mekons outlasted every single one of their contemporaries and as the new documentary Revenge of the Mekons ably proves, they show no sign of slowing down.

Always more punk in concept and sensibility than actual execution, the Mekons began life in the shadow of “proper band” Gang of Four, picking up that group’s instruments while they took a break from rehearsal, tailing them to gigs and eventually competing with them for opening slots for touring bands stopping through Leeds. Director Joe Angio, who previously directed the Melvin van Peebles doc How to Eat Your Watermelon in White Company (and Enjoy It) seems to have an innate understanding that those humble origins still basically define the Mekons, making them punk’s last holdouts, picking up left-over ingredients from more “proper” musicians in order to repurpose them as simpler action objects. Revenge of the Mekons is thus a fitting portrait of a band in perpetual shambles, revolutionary in their devotion to the concept of the band not as an enterprise but a gang of kindred spirits.

At first, the amateur quality of Revenge might seem like a large barrier of entry for the unitiated, culled as it is from home movies, bootleg live clips and countless other cheap sources. But Angio truly gets that the appeal of the Mekons is their shambling nature and their status as a close knit family, bonded by their passion and willingness to make large professional sacrifices in service of their art. Angio does, however, break the documentary down into sections, clarifying the “story” of the band in order to make for easier viewing and to also illustrate the profound evolutions the band has undertaken in their decades of existence.

Angio understandably devotes a significant amount of time to the band’s frequently cited peak, from 1984 to about 1989, when they shifted from a confused young art punk band to the developers of what would become the alt-country movement. Like a lot of things involving the Mekons, this happened more or less by chance, as the group picked out the cheapest studio they could find, only to discover it was run by Bill Leader, the Alan Lomax of English folk music. Under Leader’s tutelage, the band embraced their English folk DNA, resulting in their masterpiece Fear and Whiskey, which in turn led them to head to Chicago, a city that then became their second home, bringing about a score of other mentorships and coincidental connections.

This section also connects to the other element of the Mekons’ history that has come to define them and also foster their longevity: the individual members’ commitment to adventurous experimentation. Like any good family, the Mekons may come together for a greater good, in this case their artistically but not necessarily commercially rich music, but they frequently live far apart, stretching out from the band to explore their own interests. Angio does an excellent job shining a light on the members’ extracurricular activities, from Lu Edmonds’ work helping musicians in poor areas build studios to Susie Honeyman’s curatorial efforts at Grey Gallery with her husband Jock McFadyen, as well as working in the more visible side projects of Jon Langford, who plays in a dizzying number of side projects while also somehow finding the time to paint. 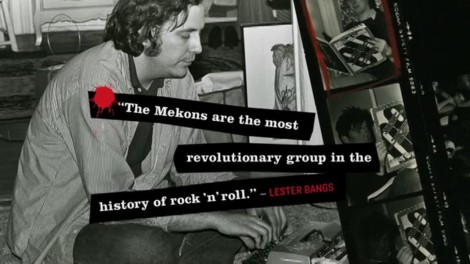 Throughout Revenge of the Mekons, the group’s friends, fans and loved ones seem awestruck by the group’s ability to survive every incident that would have shut down lesser acts. These incidents range from failed major label partnerships to tour cancellations to a general public disinterest, but the band’s take on it all is that they simply don’t know how to live any other way. Despite the threat of the documentary’s title, Revenge of the Mekons is a work of love, aimed not at proving the band’s value but the worth of their very concept. Joe Angio has done more than create a loving ode to punk’s greatest unsung heroes, he has made a solid case for a Mekons lifestyle, of accepting humble surroundings in order to remain forever close to your passion.

Revenge of the Mekons is out now on DVD and VOD.