You are here: Home / Features / Reviews in the Panel Panopticon: Trees, Doktor Spektor and C.O.W.L

In Panel Panopticon, Nick Hanover and friends talk about the comics they’ve picked up for the week, good, bad or otherwise. This week, Warren Ellis makes a triumphant return at Image, Mark Waid can’t quite make me care about an old Gold Key character and I may have found a new favorite artist in an unlikely place. 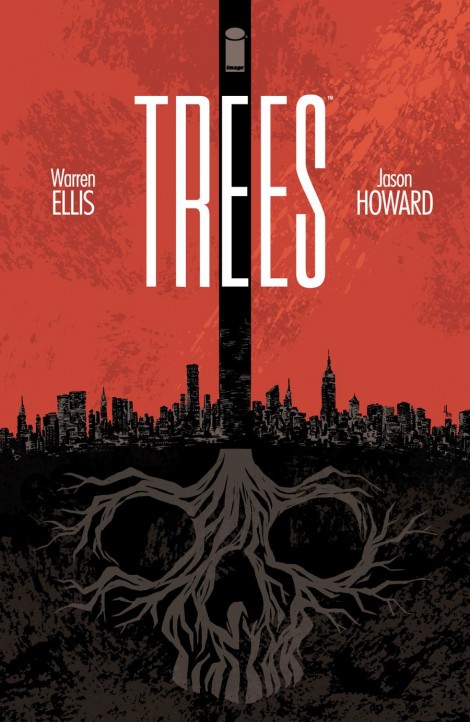 Despite his rep as comicdom’s preeminent cranky, bearded British person that isn’t Alan Moore, Warren Ellis has long had a knack for creating comics filled with a childlike wonder at the universe. It’s no coincidence that Ellis’ defining masterpiece is Planetary, a long, beautiful love letter to the strange history of comics with a plot centered around freeing humanity from the invisible technological prison an elite foursome have erected around them. For Ellis, comics provide a unique opportunity for creative individuals to bring all of mankind’s weirdest ideas– about themselves, about the world, about the universe– to vivid life, without cinema’s technological and budgetary restraints or literature’s lack of visuals. From 2001 to 2005, Ellis even published a trifecta of underrated space oriented series that stood out as particularly symbolic of this aspect of his ouevre, beginning with the alt-history UK space program mini Ministry of Space, which led into a more somber look at the ailing US space program in Orbiter and concluded with the futurist, exploratory Ocean. Newly returned to Image, Ellis appears to be revisiting that trifecta and the likeminded Global Frequency with Trees.

Set in a future where aliens have landed on Earth through the use of tree-like structures, Trees shares narrative DNA with apocalyptic zombie and sci-fi films in which the focus is on the problems humans create for each other rather than the more obvious threat posed by the alien others. In fact, one of the chief hooks to the series is that the aliens in Trees don’t seem to give much of a shit about the humans whose lives they’re interrupting. The first issue not only doesn’t feature a single actual alien, it’s clear through the dialogue and plot that no one has ever seen these aliens in the flesh or heard any communications from them. Just as you probably don’t notice if you step on a bug on the sidewalk or if a new addition to your home has interrupted the abode of some smaller species, the titular “trees” are wrecking cities without any apparent conscious thought for the consequences.

Like most of Ellis’ work, there’s a lot of technological and scientific concepts to keep you distracted long after you’ve finished reading, but as is also true to most of Ellis’ creator owned work, Ellis’ choice in artistic collaborators goes a long way towards keeping you so interested in the concepts. Jason Howard is in many ways the antithesis of Ellis’ collaborators on his space trilogy, favoring jagged lines and minimalist backgrounds rather than the pulpy realism of Ministry of Space’s Chris Weston or Colleen Doran’s ornate detailing in Orbiter. But given the ground level, urban perspective of Trees, that’s fitting– this is a book where massive alien structures destroy cities not through weaponry but the dumping of inexplicable, neon green waste. Howard’s ramshackle aesthetic is somewhere between the stark efficiency of Ellis’ Moon Knight collaborator Declan Shalvey and the graffiti-influenced work of Brandon Graham, which helps convey the oddly non-combative threat the trees pose.

Ellis and Howard both do an excellent job building up the world of Trees in its first issue, and the trilateral structure of the narrative– featuring three key locations with three disparate groups of characters all interacting with the trees in different ways- builds up a lot of tension around what will happen next, even as the reader is forced to ask far more questions than there are answers for. 2014 has already been a great year for sci-fi comics, but Ellis and Howard are already well on their way to presenting one of the best sci-fi stories to come out of the medium in quite some time. 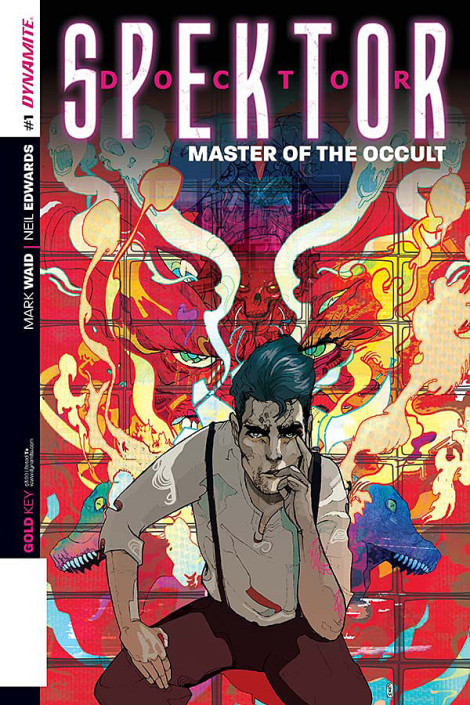 Not long after Valiant Comics staged a masterful resurrection, Dynamite Comics started unveiling new takes on the Gold Key characters it held the rights for that Valiant had previously owned, from Turok the Dinosaur Hunter to Magnus: Robot Fighter. Dynamite even utilized a cover design aesthetic not unlike Valiant’s, with clean, minimalist shapes and sharp, digital lettering. Turok and Magnus (the latter of which is even written by Valiant vet Fred van Lente) have been decent enough reboots, heavy on action but mostly unremarkable artistically, Dynamite’s announcement of Doctor Spektor, their next Gold Key release, raised more than a few eyebrows. An extremely pulpy character who lacks the new media connection of video game franchise star Turok Doctor Spektor wasn’t exactly a character with a large fanbase demanding his return. But once Mark Waid entered the picture, more than a few fans were suddenly a lot more intrigued.

Waid is a fan favorite for a reason, as the veteran writer has long maintained a healthy balance between character driven writing and an appreciation of comics’ long, bizarre history. That balance makes Waid a perfect choice for a character like Spektor, who doesn’t necessarily have name appeal but has a lot of interesting elements to his history. Created during the horror comics boom of the ’70s, when vampire and their hunters were seemingly everywhere, Spektor’s original Gold Key adventures only lasted a scant four years. Spektor looked like a Hammer Films hero, with his goatee and fabulous shirts, and he had a monster menagerie to match. But unlike most monster hunters, Spektor was aided by a weird array of multiethnic female assistants, from Lakota Rainflower to Lu-Sai. It’s this last element that Waid latches onto with his reboot, using it as a grounding force as he rebuilds the rest of Spektor’s story and turns the occult detective into a reality tv star that’s equal parts Fright Night and Blade.

Waid also grafts some classic Marvel-style tragedy to Spektor’s story, giving the Doc a reason to become more responsible, but his assistant Abby Horne is the secret star of the debut as she’s easier to relate to than the Doc himself. Unfortunately, Neil Edwards’ art is in Dynamite’s Gold Key house style, favoring flat colors and the most goofy grins this side of an HR instructional video. Edwards seems to only have a handful of facial expressions at his disposal, which makes Waid’s character work harder to buy into, and for an occult-themed comic, this first issue struggles the most whenever monsters or spirits are present, which is a huge problem. The comic never lives up to the expectations of Christian Ward’s cover, which features Spektor surrounded by vivid spirit streams and a multitude of ominous, unclear threats. The new series has potential, especially if it can develop the reality show angle into something less cliché, but it has a long way to go before it stands out as a notable Waid work or is able to compete with Valiant’s more dynamic take on Gold Key characters.

Earlier this week, I was having a discussion on Twitter with two comic artists– Eric Zawadzki (The Ghost Engine) and Alison Sampson (Genesis)– about whether art or writing matters more to comics fans. Like always, I fell back on the argument that I will pick up a comic with incredible art no matter who the writer is or whether I’m into the concept, but I am a lot less likely to pick up a comic with great writing and mediocre art. In that discussion I had used Sampson’s own Genesis as an example, since I’m not typically a fan of Nathan Edmondson’s writing, but Rod Reis’ work on the newly released Image series C.O.W.L. might be an even better example since I picked it up not hoping for much based on the concept but was immediately blown away by what I saw inside its pages.

Kyle Higgins and Alec Siegel’s concept for C.O.W.L. outwardly appears to be slightly cliché, sharing subject matter with outstanding procedural comics like Gotham Central, Powers and Top 10. While the first two are crime comics set around regular human police officers investigating superhuman incidents, Top 10 is the closer comparison since it features actual superhumans doing the investigating in an art deco city full of colorful characters that reference comics’ past. C.O.W.L’s narrative hook is that it’s focused on the first “superhero union,” the eponymous Chicago Organized Workers League, and it has a Cold War setting and motif that also helps distance it from Alan Moore and Gene Ha’s wonderful Top 10. None of that really matters, though, because for all intents and purposes, C.O.W.L.  is Rod Reis’ show.

Gifted with a phenomenally expressive abstract style, Reis’ aesthetic has nearly no peers in contemporary comics, other than Bill Sienkiewicz, whose New Mutants work in particular seems to have influenced Reis. Like Sienkiewicz, Reis favors gritty urban color palettes punctuated by neon streaks of light and shapes that bend and twist in an inhuman fashion. Right from the start of the comic, Reis’ work is a wonder to behold, exciting in its uniqueness and impossible to turn away from. Reis’ aesthetic functions as a vibrant juxtaposition to Richard Bloom and Eric Wight’s vintage design work, trading in the clean, functional lines and bold coloring for a vividly shifting mixture of abstract shapes and bursts of splatter. Higgins and Siegel make the brave decision to throw readers right into the middle of the story with no explanation or handholding and while that initially makes for a confusing narrative ride, it suits Reis’ style well, allowing the artist to guide the reader like the tracks of a rollercoaster.

The copy for C.O.W.L didn’t sell me on the concept, but the confidence of Reis’ art and the singularity of his vision lured me in, forcing me to look past my bias and just let the book guide me. I’m glad I jumped in, and if other readers are willing to take a chance with the book, C.O.W.L could end up the surprise Image hit of 2014.
—————————————————————————————————————————————————————-
Nick Hanover got his degree from Disneyland, but he’s the last of the secret agents and he’s your man. Which is to say you can find his particular style of espionage here at Loser City as well as Ovrld, where he contributes music reviews and writes a column on undiscovered Austin bands.  You can also flip through his archives at  Comics Bulletin, which he is formerly the Co-Managing Editor of, and Spectrum Culture, where he contributed literally hundreds of pieces for a few years. Or if you feel particularly adventurous, you can always witness his odd .gif battles with friends on twitter: @Nick_Hanover