You are here: Home / Features / Romance, Rewind, Repeat: The Infinite Man is the Smart Time-Traveling Rom-Com You Didn’t Know You Needed

Self-acceptance is a bitch. It’s a universal human flaw that no matter how attractive, bright or confident we may be there is always something that falls far short of the personal perfection we desire. Perhaps it’s a minute doubt that we have to brush aside on occasion or a demanding, perceived flaw that can develop into an obsession. It makes for a bizarre romantic existence where everyone wants to feel loved for who they are yet due to our own insecurities we will attempt to deceive or compensate for shortcomings. It has undoubtedly contributed to the complete implosion of at least a handful of my own relationships, and somewhere in the back of everyone’s mind there’s the lingering, “Why would anyone like me?”

The Infinite Man‘s opening lines quickly establish this overlying motif as our protagonist‘s voiceover– set against the backdrop of his countless romantic gestures– delivers a pleading case for a chance to bring his lover happiness. It becomes increasingly obvious to all except our hero that his efforts to please have very little to do with his desire for her happiness, and revolve primarily around his own feelings of inadequacy and obsession with perfection.

Dean (Josh McConville) is an off the charts genius, a creative inventor, and a total control freak who is insistent upon creating down to the minutest detail the perfect weekend for his impressively patient girlfriend Lana (Hanah Marshall). They return to the same beachside hotel where they stayed for their anniversary last year and immediately Dean’s carefully constructed plans are foiled. The hotel is closed down and abandoned, and we first witness the neuroticism that goes into Dean’s obsessive planning. Determined to make the best of the situation they continue on with their romantic plans when Lana’s delusional and hilariously self-obsessed ex-boyfriend Terry (Alex Dimitriades) shows up to ruin their anniversary. Dean tries to confront him and instead finds himself on the receiving end of a cattle prod and overhears something he can’t believe, as Lana seems to leave him behind to go to the beach with Terry. Heartbroken and betrayed we find Dean a year later still at the hotel with a complicated and ominous device he’s constructed looming in the background. He calls Lana begging her to return, that things will be different this time. Unbelievably Lana arrives and so begins the warped and hysterical journey through time as Dean convinces Lana to return to last year’s moment to change things. 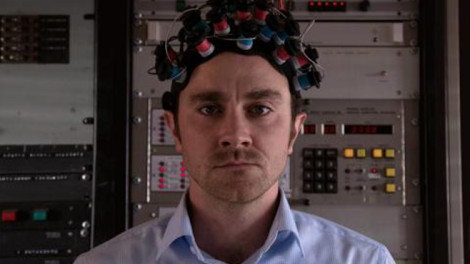 Director Hugh Sullivan has created a film that states its purpose from the get go, but sustains the audience’s investment and interest while remaining consistently entertaining throughout. Alex Dimitriades as the aloof Terry is a scene-stealer whose mere presence will elicit cheers and cackles, and interestingly enough comes to serve as a kind of warped funhouse mirror to Dean. He’s everything Dean isn’t: daft, alpha and physically imposing, but also lacking in self-acceptance, believing Lana’s love will complete him. McConville as Dean does an excellent job of remaining likeable in what could have easily slipped into train wreck of a despicably pathetic character. Dean’s love for Lana is genuine, but he fails to see her as another human with her own flaws, and instead as a personal project to obsess and win over despite already having her affection. In front of Dean is a beautiful and bright individual who is in love with him enough to overlook his neuroses and simply enjoy their time together, but all Dean can focus on is exhausting his entire being and energy for Lana. In Dean’s mind it’s romantic, and he overlooks the power this unconditional love loses when it transforms into an endless list of “Look at all that I do for you.”

The chemistry, comedy and drama of the film are all consistently well conveyed throughout, but what allows The Infinite Man to succeed on all levels is the flawless execution and interconnection of its time-traveling plot structure. We see the cyclic nature of Dean and Lana’s relationship to be doomed over and over when Dean’s attempts to correct the past only push the present into deeper turmoil. The specifics of the time-travel are sufficiently explained for the tone of the film, and the details of the actual time-jumps are handled with amazing precision. I was almost taken out of the experience of the film at points, as I wondered how they captured so many identical moments from various angles with at times repeat verbatim performances that manage to never bore. The logistics of the film for its incredible low budget and small cast showcase Sullivan’s talents as director with astounding vision, and a naturalistic ability with touches of mumblecore.

THE INFINITE MAN Trailer from The Infinite Man on Vimeo.
The carefully crafted suspense of Primer meets the sincere heart of Scott Pilgrim. The film becomes more and more enjoyable and entertaining upon with repeat viewings, and its charming physical comedic quirks never feel disingenuous.  The Infinite Man successfully balances its multi-faceted genres with an expert hand, and has easily won me over as one of my personal favorites of the year.

We originally saw The Infinite Man at SXSW, but if you’re in New York, you can catch the NY premiere of the film at Rooftop Films this weekend.