You are here: Home / Features / Learning to Articulate: School Daze May Be Spike Lee’s Weirdest Film, but It’s Now More Relevant Than Ever

This week marks the release of Dear White People, a heavily hyped comedic commentary on race in America that was well-received on the festival circuit. Set in a fictional Ivy League school where two characters represent conflicting notions of blackness in America, complete with internal conflicts over the lightness of their skin, astute viewers may immediately experience deja vu and be taken back to an early entry in Spike Lee’s ouevre: School Daze.

There’s a strong chance that School Daze will forever remain the weirdest film in Spike Lee’s resume. As the (relatively) big budget follow up to She’s Gotta Have It, Lee likely felt the need to show off some versatility and make the use of his new funding, but the odds of anyone predicting that Lee would make a college musical for his sophomore effort had to have been slim to none. After all, School Daze notably features a song dedicated to butts (conveniently titled “Da’ Butt,” it was surprisingly one of the hits from the soundtrack) but it’s also a brave examination of how sexual and racial politics often intersect, and the ways victims can become victimizers themselves, supposedly based off of Lee’s own college experiences.

School Daze begins with a title sequence of photographs of important black figures from throughout American history, from politicians and activists to sports heroes to stars, all meant to invoke the cultural black experience and the popular notions of what it is to be black. Though it initially seems gimmicky, it’s a fitting framing device since the characters of School Daze arguably all attempt to slot themselves into positions based on these icons, whether it’s sort-of protagonist Dap and his Huey Newton/Stokey Carmichael militancy or his arch-nemesis Julian, who attempts to be different by rejecting these figures altogether in favor of a new, “rational” blackness. 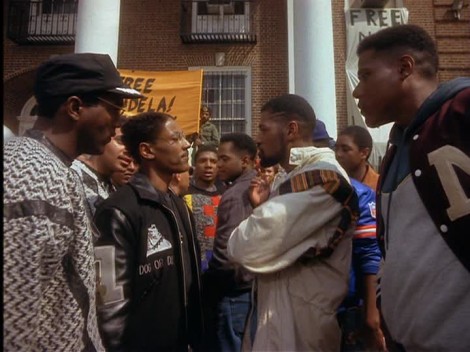 Of the two characters, Julian is the more complicated and interesting. Julian is portrayed by a young Giancarlo Esposito (the future Gus Fring)– an excellent then-new addition to the Spike Lee ensemble– who manages to be both militantly sharp and intellectually clear and concise, which is important considering the odd enunciation and exaggerated expressions Lee’s script calls for. In contrast to Laurence Fishburne’s seemingly morally upright Dap, Julian has no qualms admitting to his flexible morals and willingness to act against his community if it benefits him. Dap’s central conflict, then, isn’t actually with Julian but his suspicion that Julian is in many ways right, or at least more aware of what it takes to survive in the present, and his concern is not with what that means from a moral standpoint but an evolutionary one.

That conflict manifests itself in a clearer manner in the film’s dark vs. light skin narrative, with Julian acting as the extreme example of what Dap fears from the encroaching mulattoification of black Americans and Dap a prime example of how that fear of assimilation can bring down morals and codes and whatever else one uses to build an identity. Like She’s Gotta Have It, Lee isn’t content to let this conflict play out merely in the streets, or pulpits, or schoolyards, but in bedrooms as well, the intimacy making for an even more effective battlefield. Dap and Julian both victimize each other and those around them, both act against the interests of their partners and families. And they both share a victim in Dap’s cousin Half Pint.

Played by Lee himself, Half Pint is central to the story but also somewhat removed from it, pushed by both of these dynamic forces. It’s through Half Pint that Dap gets much of his information about his rival, as Half Pint is positioned as a double agent in Julian’s fraternity, the Gammas. But Dap is troubled by the way that Half Pint takes to the position, drawn to the natural magnetism of Julian, even as Julian becomes more monstrous. Julian and his frat brothers run Half Pint through a torturous gauntlet of hazing rituals, which are at first played up for laughs, but they eventually make the end result all the more effective. Dap ultimately fails Julian and thus himself by not paying enough attention to how he was developing and neglecting to be available when Half Pint was reaching out for a mentor. Dap speaks about being there for his brothers, but when his own blood is reaching out, he’s unable to provide help.

Likewise, the film’s most successful scene occurs when Dap is forced to put his ideals into direct action after his crew nearly gets into a brawl with some of the townies who think the students are driving them out of jobs and being uppity. Dap is at first intimidated by the townies, led by Samuel L. Jackson, but when he reconfigures the incident as a way to address how blacks of all tones and social strata are forced against one another by their oppressors, he seemingly has an epiphany…until he then uses the victimizing he was just put through as motivation to then attempt to victimize his rival, Julian. That also goes a way towards explaining the similar victim-on-victim violence that happens immediately after, as Dap and his crew disrupt a step show to call their rivals “Gamma Fags” before attacking their sorority sisters. That scene was supposedly completely organic, with the fight unplanned and occurring because of the tactic Lee used to motivate his actors, putting the actors playing the Gamma-affiliated “wannabes” in a better hotel than where the Dap-led “jiggabos” stayed.

Lee also consciously chose blunt iconography for these two opposing forces, reflecting both the social roles they theoretically fit and the expectations of their character. Lee went with en vogue military garb for Dap and more urban dressings for his followers, but he selected a dog as the mascot for Julian and his Gammas, stressing their perceived subservience and complacency in the name of loyalty, specifically clear in their choreography, with the wagging and walking on all fours and so on. Lee utilized the dog symbolism to comment on the sexual appetites of the frat boys, with a key scene involving Half Pint trying to seduce a woman resulting in numerous comments about him being a dog, both in regards to the house he’s pledging to and his behavior. It’s no coincidence, either, that their mirror image sorority utilizes the cat, which of course brings up any number of single entendres.

Nonetheless, the way Lee creates parallels between racial and sexual conflicts remains fascinating, particularly in sequences like the extended musical number “Straight and Nappy,” which has the “jiggabos” and the “wannabes” singing and dancing out their debate over which hairstyle is preferable, and what either says about your racial and sexual identity. The hair, of course, is merely another way of commenting on the skin tone divide. That fact even plays a part in the drawn out scene between Dap and his on-again-off-again girlfriend Rachel, where the question of purity in race in regards to the lighter skinned wannabes almost acts as foreplay, which itself is bookended with Rachel’s confession afterwards that she’s joining the Delta sorority, leading to a fight where she accuses Dap of only being interested in her because she’s “one of the darkest sisters on campus.”

Immediately after, Lee unveils one of the film’s most controversial scenes, the infamous coupling of Julian and his troubled partner Jane, which is shot similarly to like-minded sequences in She’s Gotta Have It, but plays up the kink factor, emphasizing the similarities between Julian’s sadomasochism as a leader and a lover. But as complex as both of these scenes are, they merely function as set-up for the film’s darkest scene, wherein Julian essentially hands off Jane to Half Pint. Julian’s move is one of power and dominance, easily viewed as either his kink gone too far or as an attempt to prove his status by his ability to effectively enslave someone else, which, to his way of thinking, is the ultimate act of assimilation– wielding the weapon that white culture used to hold his ancestors down.

Lee’s ideas in School Daze are undeniably great, even if at the time his peers attacked him not for the quality of the film but for the unflattering way he depicted black youth. To those peers, School Daze was ammunition for white pundits attempting to discredit black youth as gangsters and criminals, which is all the more fascinating given the controversy Lee was embroiled in with regards to the unfortunate death of Trayvon Martin. But that issue that Lee’s contemporaries had with the film arguably adds to its effect, providing a real world example of the shifting notion of blackness and what that means for those striving to live and thrive within it. Though the film suffers from a chaotic structure, questionable musical selections and a huge disparity in talent between much of its cast– as well as a laughably over the top ending– it nonetheless succeeds as a document of the battle over ethnic and sexual identity, a battle which never really ends. And with the looming success of Dear White People, it seems clear that School Daze has remained a strong influence for some filmmakers, and may even finally get renewed appreciation.

This essay originally ran in a different form at Spectrum Culture.