I’m surrounded, so, naturally, I freeze time. Three big, lumbering enemies are pressing in on me. Their attacks do exactly too much damage, and I need to get rid of them quickly. I start by dropping a bomb where I stand. Then I chain a move to that that allows me to teleport a short distance away. Next, I send a volley of energy toward the bomb and the enemies around it. Then I use the teleport move again, positioning myself on the far end of the arena, safely away from my foes.

I unfreeze time. I find that I’ve returned to my starting position, in between the three amigos. But then, in quick succession, my character acts out all the moves I just planned. Bomb, teleport, blast, teleport. The energy blast hits the enemies with splash damage, but misses them by and large. “You missed,” one of them says in my imagination, because my inner world is a comic book.

“No, I didn’t,” I reply to my screen (like a maniac). Because I hit exactly what I was aiming at: the bomb. It explodes on cue, destroying the three amigos, while I celebrate far outside of the blast radius. This all took about five seconds.

That’s Transistor. Released last month by Supergiant Games, the same team that brought indie darling Bastion to bear in 2011, Transistor is a strange, complicated game, an action-strategy game played from an isometric perspective in a post-cyberpunk digitized reality where things like architecture and the color of the sky are put up to popular vote, a place where, as some characters in the game put it, everything changes and nothing changes. It’s about exploring a place you don’t quite understand, a place with a history that’s nebulous and maybe nonexistent. It’s about the power of creativity to shape the world around you. But even more central than that, it’s a game built around creative, fun mechanics, the sort of game that gives you a jolt of pleasure and a feeling of brilliance from playing it well, the sort of game that makes me inclined to congratulate myself for a job well done after a good fight.

Transistor stars Red, a pop singer in the city of Cloudbank, a utopian and possibly-maybe-not-real? city that serves as the central setting of the game. She has, however, lost her voice, which has put a real crimp on her career. It seems to have been absorbed by the Transistor, the giant green-and-red sword she carries around. The sword has also absorbed the spirit/data of her boyfriend, who is very, very talkative (he will occasionally say something while you read in-game text, a sin I would have shunned someone for in high school). Red and her sword-boy are on a neo-noir-infused quest to find out what happened to them, how to get his body and her voice back, and how to stop the Process, a rampant hostile presence in the city that seems to be literally deleting it around them.

One of Red’s songs, an example of the game’s incredible soundtrack.

Transistor subscribes to a school of video game narrative that I like to call notional storytelling. It’s a fairly common strategy among indie and avant garde games, one in which narrative details are sprinkled out piecemeal throughout the game and never put into a coherent picture, left for the player to piece together on their own. Red’s boyfriend is a narrator of sorts, providing some exposition and insight, but his perspective doesn’t go that much deeper than yours. In-game flavor text provides more detail, but it’s still incomplete and muddled. The few other characters you meet in your time in Cloudbank speak elliptically, as if they’re trying to keep important details from you or just expect you to already know what they’re talking about.

In lieu of full narrative disclosure, games that rely on notional storytelling like Transistor rely on atmosphere, aesthetics, and symbolism to relay meaning, and they leave a lot up to individual interpretation. It reminds me of a song by a band like The National: there seems to be a story here, and some of the details are knife sharp, but the whole story just doesn’t ever quite come together, leaving you with impressions and ghosts in its place. It’s done fairly well here, giving the journey a thoughtful, evocative edge. Cloudbank is a bright, strange place, with vivid colors and a crystalline structure to its architecture that evokes both circuitry and magic, and the details of the story take on an impressionistic hue.

Red’s lack of a voice seems a central thematic concern here, even as it’s rarely directly mentioned as a theme: she can still hum, and you can press a button to have her hum along with the consistently excellent background music, elegiacally reflecting the power she used to have through song. For a singer, a voice can be a means to shape the world, and losing her ability to sing is a fundamental loss for Red, reflected through this simple and largely superfluous game mechanic. 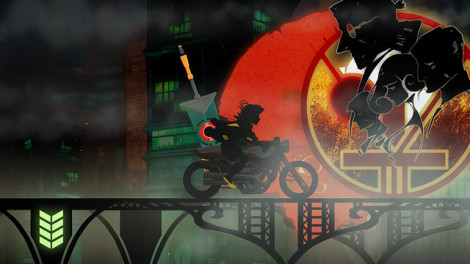 Red, however, is far from powerless. The Transistor serves not only as a boyfriend container but as the primary means of interacting with the game world. It’s both a weapon and the central plot MacGuffin, making it into a symbolic substitute for Red’s voice, a means to take back power and influence in Cloudbank. Like the circuitry of the same name, the Transistor serves to help you execute functions, which are essentially spells to use in combat, which is where you’ll spend most of the game time. It also, crucially, allows you to enter a planning stage during combat (the aforementioned time freeze), which makes the combat into a unique hybrid of real-time and turn-based action. You stack functions during the planning phase, setting yourself up a script to act on. When you’re done, Red performs the actions just as you’ve set them out, moving lightning quick around the world as her enemies scramble to respond. In between battles, you can rearrange and stack a growing array of functions, creating unique moves and tactics to suit your play style.

It’s a system that runs incredibly deep, and most of the joy in Transistor for me was in exploring this combat system, chaining together moves and trying to beat up the Process in the most efficient, creative ways I could think of. I would play like three other Transistor games just on the back of this combat system. It reminds me of telling stories of kills or runs in games with my friends in high school, trying to impress each other with that cool thing I did man you shoulda seen it.

After each successful planning phase, your abilities enter a cooldown phase, which was the only part of the game (other than an elliptical and uncertain ending) that really frustrated me. Your abilities and the planning phase itself take a few seconds to recharge, during which you’re left with little to do but run away and try not to die. The interplay between empowerment and disempowerment makes sense, and is a decent enough cost for using the planning phase, but it leaves you with no meaningful way to interact with the world and feels harried and unpleasant, a sort of filler that takes up too much of the game’s time. The punishment for “death,” here, however, is not apocalyptic: the game just takes away one of your active functions when you run out of health, forcing you to reach a certain amount of save points before you can use it again. This means you’ll have to think quicker on your feet and rely on other functions to get through the battle, forcing you to modify your strategies. One time I was left in a rough battle without any function that directly dealt damage, and I was forced to try to come up with some way to finish the fight. It’s cool, and I felt a bit like a genius when I survived, but I feel like I could have avoided most of my failures if the cooldown phase wasn’t so frantic or if the arenas in which you do combat weren’t typically so small.

Despite those complaints, however, Transistor was a great experience, one that I’ll likely revisit in order to further plumb the depths of its storytelling and its combat system. Red’s quest to regain her voice and her love is a powerful one, and Transistor is an example of the freedom and creativity that marks indie gaming at its best. Despite Red’s loss, this game sings a beautiful song.

Transistor was reviewed on the Playstation 4. Transistor is also available for PC.