You are here: Home / Features / The Black Age: Exploring the New Wave of Neo-Noir Comics

Amid the resurgence of the cape-and-tight set due to the multimedia conglomerate cash influx of the last half-decade, there has been a spark in genre comics that has been commercially unexplored in comparison. They’re the books on the shelves with uncommon credits and covers that aren’t simulating starfire or stadium lights- they’re timelessly modern, a neon sign advertising cocktails barely staying lit.

Noir has been a part of comics since comics has been a part of comics and it’s one of the genres the medium seems to be built for. Whether in color or black and white, the interplay of shadows and light and the rhythmic dialogue and focus on long-con plotting suits noir perfectly for the pulp books as well as pulp prints and the publication schedule of sequential art and writing. In modern comics there is a rainstorm of noir, traditional and neo(n), making its way into local comic shops that is advancing the medium through the medium itself- writers like Ed Brubaker, Greg Rucka, Matt Fraction and artists like Matthew Southworth, Annie Wu, Justin Greenwood, Howard Chaykin, Sean Phillips and wunderkinds like Darwin Cooke have guided noir into the 21st century and have created a new Black Age of works that frame the medium and forward it simultaneously.

It isn’t all about fedoras, rain and cigarette smoke, though it certainly is a solid basis to start. Books like Brubaker and Phillips’ The Fade Out and Fatale, Darwyn Cooke’s graphic interpretation of  Richard Stark (nee Donald Westlake)’s Parker novels and Fraction and Chaykin’s Satellite Sam steep themselves deep in the hot jazz and slicked streets that the genre stumped into the frame from. They’re craftsmen at work and not just hired hands- these books aren’t just the same tools in the same configuration. It’s not the wall at Home Depot as much as it is the table full of scary-looking shit- the pieces tell a story but not the one that seems obvious. Bru and Phillips recently wrapped the visceral Fatale, a unique melding of genres which imagined H.P. Lovecraft by way of Dashiell Hammett– immortal femme fatales, Cthulu creatures with Tommy guns, plenty of bloodshed to boot. It takes both parts of the whole to a new and largely unexplored Venn diagram crossing, with slow-burning but fascinating results.

Conversely, the duo that bends the rules also prove they know how to follow them, as evidenced by their latest collaboration, The Fade-Out. Set in post World War II Hollywood, it is a grainy and Technicolored tribute to an ugly era that history has primped and pinned up. The first issue (available in an all-too-necessary large format magazine variant) capitalizes on Bru and Phillips’ talents, specifically finding the bookends to the expected narrative- there’s going to be a dead body and someone’s getting blamed for it, but how did the victim get to the party? Who came running when the witness found the body? This tactic helps bleed the reader into the narrative- no longer the casual observer who knows these are sets and costumers, the audience is now another photographer on the beat or a fly on the wall about to be crushed by a paranoid studio head.

In a similar vein, Fraction and Chaykin’s Satellite Sam, with its logline of “Sex! Death! Live TV!” is a well-fitted companion piece to view two industries that were never as divided as they wanted to be, especially in this day and age of airwave auteurism, with stars of old finding new life as sequential leads and the merging across all streams- doing TV isn’t considered a step down but instead another job. Satellite Sam sinks its teeth into a time when that wasn’t the case. It casts a fiery studio light onto another era made wholesome by omission. The story of Carlyle White, beloved children’s show actor and filthy pervert turned murder victim is one with many threads and many motives- Carlyle’s an asshole from frame one, so why should anyone care? It’s a book that utilizes noir lighting technique to its most logical conclusion- the black-and-white of the show contrasting with the “real-life” segments engenders a subconscious greying that is where Fraction and Chaykin tap the pulse. Someone killed Carlyle White and the killer is going to get found out, but the journey is richer in wondering why… or why it took so long.

Darwyn Cooke engages this aspect with his adaptation of the Parker novels- he manages to make lean and mean the already gnawed prose of Westlake nee Stark. Parker’s terseness and repellent nature lend themselves to the comics page, and Cooke paints him as an anchor to the rest of the diegetic world in. Even when punching a man so hard that he dies (in The Score), the eye follows the body being hit by Parker’s giant “hands as big as hams” more than anything- it’s a clever reinterpretation of the rules of sequential art- not passive but reactive. Cooke also draws the most delicious looking martinis in comics- a must to have in the slight transition from noir to pulp-noir. 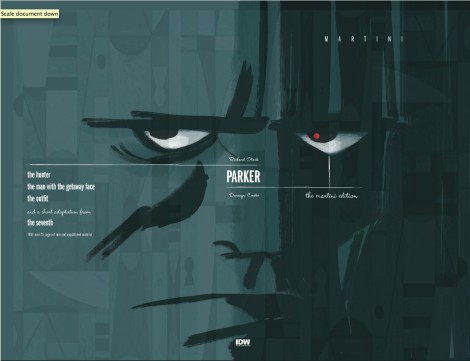 Then came the colors. Beautiful rich neons and pastels, but the heart stayed the same. The hats and coats gave way to death glares hidden behind drugged out eyes and sunglasses. Like traditional noir played with darkness and light, the neo-noir movement blew the whole thing out in the open, and with no place to hide from the light, how do those new shadows form?

Matt Fraction is one of the most superlative writers in comics and all praise is inadequate to how truly talented he is, as he proves with the ever popular Hawkeye series. Currently the series is split across the coasts, with Clint Barton in New York and Kate Beaton in Los Angeles. The Beaton stories are out of the Robert Altman ‘70s in aesthetic, with a non-too-subtle nudge to the masterpiece The Long Goodbye and to Jim Rockford as Kate sets up her own private investigation firm, turning over the stones that were colored to blend in in an era of psychedelia giving way to excess. Wu’s art is kinetic and her usage of non-traditional lines gives the visual element of the book a waviness that reflects the undulating California sun and since this is neo, that ocean of colors that Matthew Hollingsworth splashes into the frame is as integral in reinforcing that never-ceasing light. Hawkeye is awash in orange-crate orange colors and hot pinks and blues when Kate is out in the world and reigned back in with ugly browns and yellows whenever she’s indoors, be it a police station or her apartment- a subtle reminder that there is something she and the reader are being blinded to.

Greg Rucka’s Stumptown is a thoroughly modern and learned take on the detective- featuring the sassy, driven Dex Parios, Rucka’s talent for writing well-crafted and fairly represented women is at an apex with this book. Dex can express her sexuality but also be put through the ringer in the classic hard-nosed detective tradition while the two never come as incongruous to the character. We get small representations of various races, creeds and people in the series, including Dex’s mentally challenged brother Ansel– with Rucka’s deft hand it never feels like checking boxes on a list but more of a naturalistic approach to diversity, giving Stumptown a lived-in feel, again echoing back to the tradition of noir of not being glamorized. Previously teamed with the incredible Matthew Southworth on the first two self-contained arcs, Rucka and Justin Greenwood recently dropped issue one of an on-going. A new case and a new life awaits, and the first issue challenges the conventions of the comics page. The entire issue takes place at an MLS game between the Portland Timbers and the Seattle Sounders and Rucka and Greenwood use the dialogue of chants as a visual throughline to the increasing chaos of the game and rack the tension to the inevitable reveal at the end, but it again is a technique that makes the world of Stumptown immersive and vibrant. While set-up heavy, it’s reminiscent of the grit and information flow of a William Friedkin film in the ‘70s or the aforementioned Altman or to a degree Chinatown’s Roman Polanski- it’s a world that starts small and builds to the characters as it does to the readers, making the discovery process as crucial as the impact of the revelation.

A reductive statement like “noir is back” is not apt, as the genre hasn’t gone anywhere. Nor is it truly a resurgence, since these books largely remain in the know of the already knowledgable, but our purposes is to highlight a rich vein of comics as an alternative to the main set. The current study of noir and its evolutionary state is a bullet fired from an ex-lover’s gun: it knows where to hit and it knows how to hurt and it’s bound to stick around as a reminder.

Rafael Gaitan was born in 1985, but he belongs to the ’70s. He is a big fan of onomatopoeia, being profane and spelling words right on the first try. Rafael has a burgeoning stand-up career and writes love letters to inanimate objects as well as tweets of whiskey and the mysteries of the heart at @bearsurprise. He ain’t got time to bleed.