You are here: Home / Features / The Dicks’ Kill From the Heart has Only Gotten More Important with Age 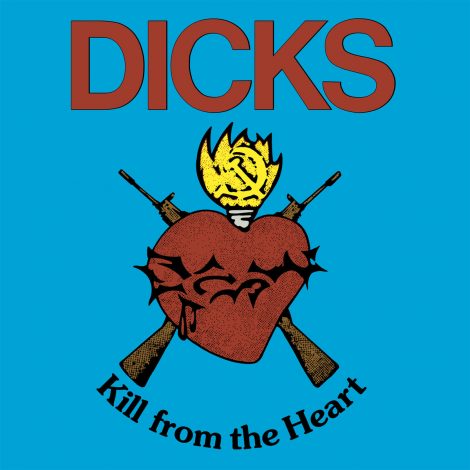 Right after Trump won the election, one of the most common and obnoxious statements you’d encounter amongst liberals was some variation on “Well, at least the art will be amazing for the next four years!” I may not have been making art in the ’80s under Reagan but I imagine to the artists who lived and worked in that time (or at the least the ones that haven’t morphed into the conservatives they railed against), such remarks are more than irritating, they’re a devastating reminder of how so much of what they fought to stop came to fruition anyway. This thought weighs particularly heavy on my mind as I listen to Alternative Tentacles’ reissue of The Dicks’ debut album Kill From the Heart, newly available on Bandcamp.

Speaking to Maximum RocknRoll in 2014, Gary Floyd, legendary frontman of the Dicks, summed up the ’80s as a time when “Reagan was the leader and people were following like sheep,” with even scenes that one would expect to be more progressive, like the queer community Floyd was such an outspoken force in:

“Seeing the oppressed queers going along with the norm — being right wing, even — really sickened me. The great acceptance made me mad”

That observation stands out now, after the Nu-Nazis and the Trump administration have tried to absolve themselves of bigotry by pointing towards their “acceptance” of figures like Milo Yiannapoulos. But that element of history repeating its failures and ugliness runs all throughout Kill From the Heart, its messages disturbingly just as fresh today as they were more than 30 years ago.

In the wake of Charlottesville, though, its Kill From the Heart’s insistent point that there is no value in tolerating intolerance that hits the hardest. By no means a subtle album, Kill From the Heart practically demands true revolutionaries fight fire with fire, getting directly in the face of oppressors, violently running them out of culture if need be. “Dicks Hate the Police,” the track that cemented the Dicks’ legacy and spawned countless covers, clearly depicts police brutality but it saves its most damning condemnation for people who expect a blatantly bigoted system to come around to equality, telling them “You can’t find justice/It’ll find you.” In this case the justice is coming from a man rejecting being sent to war against oppressors in other lands in order to fight the oppressors at home.

The punk movement would later adopt the Dicks’ general anti-police sentiment as a form of instant rebel cred posturing, but it would be a mistake to view the Dicks’ beliefs as some kind of reverse Dirty Harry fantasy. What the Dicks were trying to push against was the notion that you simply had to have faith in our justice system and everything would work out. The Dicks knew this wasn’t a possibility because authority in America not only favors the privileged, it employs white supremacists to hold the disenfranchised in check.

Only a few years ago, Kill From the Heart’s fixation on the KKK’s involvement in this system in particular would have seemed dated but now songs like “Anti-Klan (Parts One and Two),” “Kill From the Heart” and “Right Wing/White Ring” serve as prophetic warnings we failed to properly listen to but nonetheless still have immense value as calls to action. With its shambling but frenzied musical approach and march-ready chants, “Anti-Klan (Part One)” in particular would fit right in at a 2017 rally. Calling out Klansmen infiltrating police departments, “Anti-Klan (Part One)” climaxes in a promise that “Yes, we’ll fight,” a refusal to give in to the same kind of arguments that suggested we were wrong to celebrate Nu Nazis like Richard Spencer getting punched in the face.

The Dicks also recognize the danger of that inner rage on “No Nazi’s Friend,” shifting from a Texas boogie rock intro to more traditional hardcore as Floyd admits that he sees how the Nazis could have preyed on his anger to make him into one of them, stating “I’ve got the rage in me,” but now he uses it to strike back at them. Floyd’s inner turmoil reaches even darker spaces on “Bourgeois Fascist Pig,” where he details the “will to kill” the oppressive elite have instilled in him before exploring his fantasies of murdering them and their families for the pain they’ve caused.

Like James Ellroy, Floyd is a writer who thrills by forcing you to follow him on these tours of horrifying psychology and violent authoritarian systems, and there’s even a connection between their stream of consciousness musicality and obsessive detailing of Klan infiltration of police and government systems. It’s doubtful that Ellroy ever listened to the Dicks, but nonetheless I think he’d feel a common bond with the band and their approach. Shocking, physical and bloody, Kill From the Heart is as devastating and visceral as anything in the Underworld USA trilogy but also more palatable, Floyd’s knack for singalong mayhem and the band’s ability to push the boundaries of what hardcore could even be allowing their work to get in your head in a way epic novels exploring the underbelly of the Camelot era of America can’t.

Kill From the Heart is an album that is impossible to ignore or let go of, no matter how much distance there is supposed to be from the era of its creation. And yet here we are, three decades away from Kill From the Heart’s original release, back to fighting the exact same shit except somehow on an even grander, more hopeless scale. We still can’t find justice and we’re still hoping it will find us.