You are here: Home / Features / The Truth Redefined: Superman and Passing in America

As part of DC Comics’ new DC You initiative, the publisher is seeking to diversify their books and send their tentpole titles in inviting, new directions. Batman is now a former police commissioner in a robotic suit, Wonder Woman is just a run of the mill bad book, and – most intriguingly – Superman has been left with a new status quo that sees him de-powered and his secret identity exposed in a storytelling initiative named Truth. I’m not a big fan of de-powering Superman for one simple reason but the idea of a public identity intrigued me.

At the time of writing, only one comic under the Truth umbrella has been released and that is Action Comics #41 by Greg Pak and Aaron Kuder. While Gene Luen Yang and John Romita, Jr. will tell the story of how Superman’s identity is revealed to the world by Lois Lane in Superman, Action Comics picks up with that status quo in place and uses it as a launching point to explore what has changed and what has stayed the same for the Man of Steel. Clark Kent has now been given the unenviable task of being Superman full-time with all the problems that creates but he’s still determined to do everything in his power to help others, he stands up to bullies, and he relishes his connection to humanity. The core of the character hasn’t changed so much as his environment and the reaction to him has.

This new situation that Superman finds himself in with his identity exposed is a major shift. It changes the game in such a way that I now have difficulty imagining DC Comics putting the genie back in the bottle without undoing a serious instance of progress. We should all know the origins of Superman, not about being put in the rocket and sent to Earth, but the environment in which he was created. Superman is the creation of Jerry Siegel and Joe Shuster, two young Jewish men, during a time when anti-semitism was a serious concern. From his Moses-like backstory to his birth name (the “el” in Kal-El is borrowed from a Hebrew suffix used for God), Superman is a deeply Jewish character.

For seventy-five years, the dynamic has been this: Kal-El walks through the world doing his best to fit in as Clark Kent while alternatively embracing his roots as Superman. What Kal-El does as Clark Kent is referred to as “passing” (when a member of one group is able to move among another group and to be considered a part of it). He takes an Anglo name and hides his heritage (ex: Jack Kirby was born Jacob Kurtzberg) so that he can fit in among white America, something that many people have been and still are forced to do for their own safety in a hostile environment. Some groups are able to pass among others more easily than some and the ability to pass has been referred to as “passing privilege.” For men like Siegel and Shuster, the question of whether to attempt passing or to display their heritage was an all too unfortunate one and it may have spawned the fantasy of a character who could have it both ways by living two identities.

The world has changed somewhat in those seventy-five years. The question of passing is still an important one (look no further than the dangers faced by the LGBTQIA community) for many people but there has been greater awareness of how this can erase one’s identity. Today, a writer doesn’t have the same pressure to use a pen name because their real one might be considered “too Jewish.” Don’t get me wrong, it’s still a pressure that is there but it has lessened. However, some people have never had an option to pass.

The Truth arc is being spearheaded by Gene Luen Yang, the award-winning author of American Born Chinese, and he has had a different experience than Clark Kent. As the son of first-generation Chinese immigrants, Yang has not been afforded the same privilege to pass among a society that too-often labels not-white as “other.” Through the character of Jin Wang/Danny in American Born Chinese, Yang explored the fears of alienation that the children of immigrants feel and the desire to assimilate (or to become white as is literally the case with Jin Wang’s transformation into Danny) in order to avoid being ostracized by white society. The first comic Yang purchased was one featuring Superman and it may have been that the story of an immigrant who rises to prominence, not in spite of his heritage but because of it, that struck a chord with him. The difference is that Yang doesn’t have the luxury of being “Clark Kent” because he’s always Superman. And as he discussed in a panel at this year’s Special Edition: NYC, Greg Pak is Korean American but of mixed heritage so he has been able to pass effectively as white while also being recognized as Korean when among Korean people.

You can see how this idea must have gripped the creators and editors of the Superman group of titles. Here you have a character whose roots lie in the immigrant story and you pair him up with writers with a somewhat different take on that immigrant story. The decision to have Lois Lane “out” Clark Kent as Superman erases his passing privilege and puts him in the position of real people like Yang’s parents and many other non-white immigrants. It directly parallels Danny being forced to confront the harmful attitudes he has internalized and accept his true identity as Jin Wang when confronted by the Monkey King in American Born Chinese. 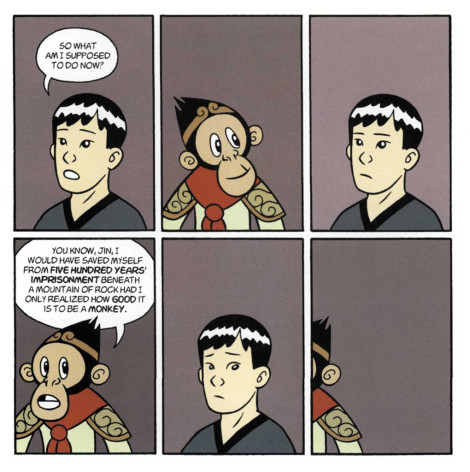 In Action Comics #41, Clark Kent encounters a predominantly white group of people that almost immediately try to gang up and beat him. These people would have never thought of doing this to the almighty Superman but now that he’s been revealed to be the weakened Clark Kent, they see an opening to express their fear of his otherness. So Clark Kent has to beat up some bigots which is just fine by me since it is a proud tradition for the character (see: Superman versus the Ku Klux Klan). This is contrasted with the welcoming community of “Kentville” that Clark finds when he returns to his old stomping grounds in Metropolis. There he is met with celebration by his decidedly multi-cultural neighbors, who have an understanding that Clark’s heritage doesn’t make him any less of a person or any less of an American. His community is proud to celebrate their neighbor that had been forced to live in secret for so long and they stand with him in solidarity.

It’s not a perfect metaphor; so far there have been no minority groups that are capable of shooting lasers out of their eyes and Superman is actually a different species. But, as the X-Men have proven over the years, a metaphor doesn’t have to be perfect for it to become important to people. Maybe I’m being naïve but I can see this development becoming important to someone that struggles with the question of whether or not to attempt passing or someone that hasn’t been given that option. Superman already means a lot to many people, but this could broaden his range in a really exciting way.

My only fear now is that this development may be undone in the future and that Superman will once again be forced to hide his heritage from the world in order to live a “normal” life. This is a big deal. A bigger deal than Spider-Man or Nightwing losing their secret identities could ever hope to be. I can understand wanting to return to the easy tension of a secret identity but to do so with Superman after this progressive move would be considerably tone deaf. One can only hope that this move will prove to be a definitive and influential moment in the character’s history that finds a way to endure.

At 20 years old, Mark Stack knows that he loves comics more than anything. Heck, all of his English teachers have known it too whether it was from him writing an analysis of dystopian themes in media using V for Vendetta or drawing a comparison in class from the serialized works of Charles Dickens to the comic book. Mark, taking a cue from one of his idols, is currently studying Journalism at San Diego State University while working part-time in a comic shop and moonlighting as a writer online. You can read his work at Comics Bulletin, Eat.Geek.Play and more. He’s on Twitter at @MarkOStack