You are here: Home / Features / Resurrection Blues: Welcome Back Breathes New Life Into the Heroic Epic 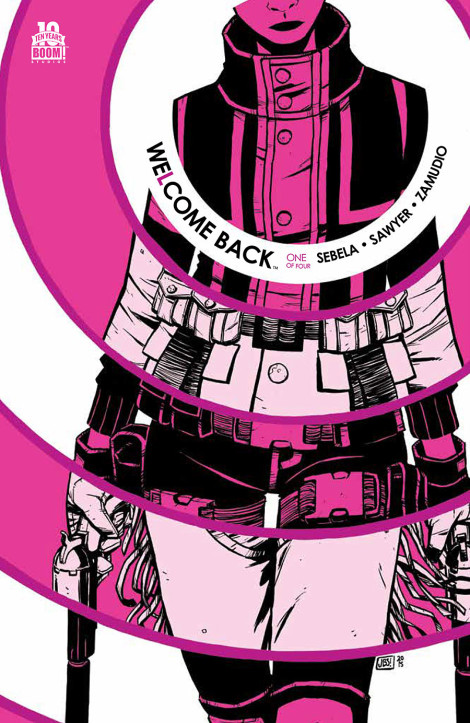 Seems like we get flooded with apocalyptic headlines on a daily basis these days. Lately it’s centered around climate changing happening faster and harsher than previously anticipated. Scientists say that heat and ice cycles are a natural part of the development of our planet but that we’re amplifying them, locking ourselves into our own loop of cause and effect– human ingenuity outpacing human resources until we invent something that saves us for a little while longer until we do it all again. Like the nuclear fears of the Cold War, this certainty of doom in our lifetimes, at our own hands, has spawned cyclical fiction, works commenting on the devastation we’re on path to receive. You see the doomsday trope in ways blunt and obvious (The Day After Tomorrow, Waterworld, the Mad Max series) as well as more subtle and somber (Melancholia, Another Earth, Upstream Color) but there is a new twist on the trope popping up in current comics, featuring resurrection cycles personified in haunted figures. I don’t mean Highlander-inspired immortality epics, like Valiant’s Eternal Warrior, but bleaker, painful takes on mysterious figures who keep coming back from the dead, like Dan Abnett and Andy Lanning’s Resurrection Man on through to the Luna Brothers The Sword and now in series like Ed Brisson and Brian Level’s The Mantle. But even those works lack a melancholic “why are we doing this?” edge, instead focusing on the inevitability of death, the pain it leaves in its wake, the suddenness and inexplicability of it despite that awareness of it as a constant. Christopher Sebela and Jonathan Brandon Sawyer’s Welcome Back is a refreshing break from that, instead telling a story of war and murder’s inherent stupidity, following a group of eternally resurrected warriors, two of whom have bucked their programming to probe at the reasons why they’re set on the path they walk.

Sebela and Sawyer wisely frame their epic with a very human story of  twentysomething struggle, honing in on the frustrations of Mali Quinn, a 26 year old woman with ample student debt and not a lot of prospects. Mali is haunted by her direct past, thanks to a murder spree her stepfather went on, as well as by murderous visions of eras she would more closely associate with descendants– mayhem in the Crusades, shootings in the Wild West, conquistador escapades. Sebela’s plotting in Welcome Back is more flexible and also more focused than his prior material, he dares to reach high and give it a monumental scale but he keeps that at the fringes, spending most of his narrative time inside his characters’ heads, teasing out their fears and motivations and suspicions of the role fate plays in lives. This storytelling succeeds because Sebela leaves Sawyer ample room to fill out that narrative ambiguity, attacking the pages with a passionate anger that matches the moods of the characters. 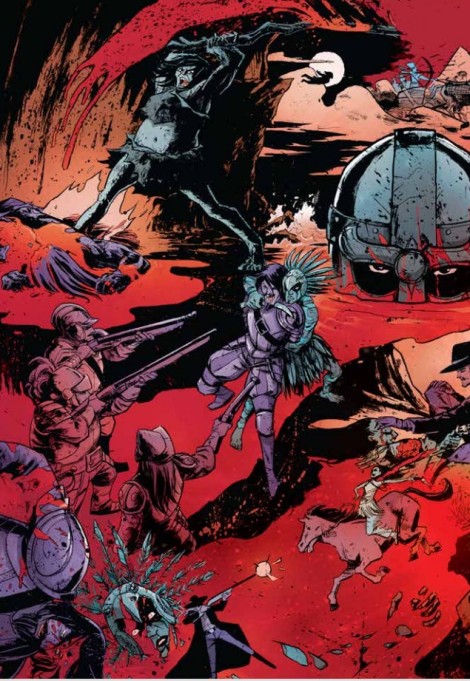 Sawyer’s panels refuse to stay frozen, they bleed out around the edges or switch perspectives with little warning, boosting Mali’s own fitfulness, the restless way she reaches for something beyond the meager life she has been given. Mali is a character who feels that she is perpetually on the verge of realizing her reason for existence but who is held back by shadows and ghosts, visions she knows to be real and those she feels are imagined and Sawyer illustrates this with punishingly heavy inking. Carlos Zamudio’s coloring is essential to the success of this too, as he is able to cot the pages in claustrophobic darkness but manages to avoid the washed out, saturated tones that have made more recent Vertigo works sometimes a slog to get through. Welcome Back’s colors have their own cycle, rising from earthy tones to jagged reds and blacks to brief bursts of vivid blues and yellows. Anyone who has been in a rut, struggling to find their purpose, should be familiar with that cycle, the way the world can seem so beautiful one moment and so ugly and cruel the next.

All this set-up, which could have bogged down the high concept in lesser hands, gives Welcome Back a refreshingly organic pace. There is a tease of a previous life’s battle to the death at the start, hinting at a story like the gloriously bonkers Japanese film Versus, but by stepping back to paint a portrait of Mali not as an eternal warrior but instead as an uncertain young woman, the larger metaphor is allowed to bloom. Though it’s dressed as an assassin epic and illustrated by Sawyer with intense kineticism, Welcome Back is really a millennial defense, a story about the pressure the world’s youth feel to not only succeed on their own terms but also slip free of the grip of ancestry, to be different from their parents and not fall prey to the same mistakes. Mali and her mysterious arch-nemesis Miss Vos are doomed to stand at opposition to one another because that’s what they were born into, but Sebela asks what might happen if they chose a different path, if they rejected the fate genetics and history have laid out for them?

The climax of the debut issue even places these two possible paths in direct contrast, with Mali newly aware of her purpose and on the run, attempting to ward off her enemies in non-lethal ways while her antithesis violently tortures a higher up for info on Mali. Sebela and Sawyer split the narrative, frequently framing Mali’s quieter moments between her nemesis’ brasher ones, but they’re both having the same epiphanies, a realization that people they don’t know are forcing them to act a certain way. Mali has taken a more submissive route to awareness, desperately trying to shake her stepfather’s murderous actions and the impact it had on her life while Vos tackles that past head on, using its own artifacts to bring about retribution and info.

Like The Mantle before it, Welcome Back utilizes tropes and signifiers as meta-commentary on the way we’re drawn throughout history to the same stories. The Mantle applied that to superheroes, the mythology of the 20th and now 21st century, but Welcome Back goes with their precursor, the epic hero, figures bold enough to fight against fate, all the while fully aware that historically that never goes very well. It’s too early to tell whether Christopher Sebela and Jonathan Brandon Sawyer will allow Mali to escape her own fate, to defeat the tragic failure of heroes all throughout history but already they’re well on their way to injecting new life into doomsday fiction.

Welcome Back is out now from Boom!