You are here: Home / Features / Westworld is Unsettling in its Lack of Self-Awareness

Have you ever noticed that the most advanced sexual pleasure technology is designed for women yet the bulk of sci-fi featuring any kind of “pleasure bot” centers around men’s pleasure? Taking that further, have you noticed that the best sex tech for women usually doesn’t look much like a penis (or any body part for that matter) while things like the FleshLight and love dolls make their creepy “realism” a selling point? These aren’t unique observations but they’re the kinds of things I can’t help but dwell on whenever some new work about human-like robots comes along, internally counting down the moments until the work smirkingly shows off its twist on the pleasurebot phenomenon. In the case of the new HBO series Westworld, I didn’t even get a chance to begin that countdown as the show literally begins with a battered, naked woman robot, and while the show tries to make itself stand out from its pulpier peers, the unsettling nature of its view of women (both human and robot varieties) is the only part of the show I am driven to think about one way or another.

A modern adaptation of Michael Crichton’s campy ’70s film a la Battlestar Galactica, Westworld is a star studded sci-fi drama set in an exceptionally advanced amusement park where rich people pay to act out their fantasies on disturbingly life-like robots and suffer no consequences. The show has yet to reveal exactly when it’s set, but it’s clear it’s in a future timeline, and a timeline I would argue is pretty fucking dystopic because the robots function as damned souls, forced to live through horrific events over and over and over for our amusement, sort of like video game NPCs, complete with the repeated lines and mannerisms but far more sentience. No one in the show ever really points out how fucked up it is that rich people get to live out their Purge fantasies, the closest the show comes to addressing that is when the manager of the park insults the head writer’s “perverted little fantasies,” and then later that head writer complains about how the guest’s “interruptions” of his scripts keep people from hearing monologues he’s written.

In the show’s defense, by the end of the first episode there is an indication that we are meant to root for the robots because a new software update is allowing some of the robots access to their memories of past programming and guest interaction, specifically all the horrible acts the guests have inflicted on them over the years, and it also seems to be expanding their sentience, causing some of them to sobbingly question the nature of their realities. The show sets this up as its narrative arc, as the update causes some of the robots to have complete mental breakdowns from their new awareness while others seem to be plotting revenge against their makers. But this is manipulative too, since the implication is “how we’ve treated these robots is only wrong if they can remember what we’ve done.”

This is clearest in the show’s central robot protagonist Dolores (Evan Rachel Wood), the battered nude woman robot who opens the show and who is revealed to be the oldest host in the park. In the pilot episode, Dolores is forced to endure a number of horrific acts, from the murder of her parents in front of her eyes to the sadistic mental torture and death(s) of her lover Teddy (James Marsden) to her rape at the hands of an enigmatic and terrifying guest (Ed Harris). Dolores is forced to go through tragedy not just for the park guest’s amusement but our amusement as well– she is first presented to us as a beautiful, bruised naked body to leer at in typical HBO drama fashion while she provides ominous voice over for the pilot. There is no real reason for her to be nude except as a twist on the beautiful corpse trope, where we’re asked to find beauty in the blood against her pale body as she stares straight ahead, undergoing psychological evaluation to determine whether or not she has been compromised like her father. 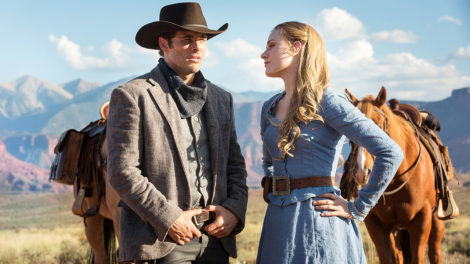 The show makes it clear that Dolores’ makers know that she is going to go through fresh horrors constantly, and rather than be concerned about how their guests use her, they instead marvel at their own ingenuity, for making her eternally optimistic in the face of strife. They acknowledge that she has been brutalized countless times and think it’s funny that she still thinks the world is a beautiful place. And the showrunners want the viewer to feel similarly, to get a kick out of the irony of this fresh faced, hopeful character believing the world is good because she doesn’t remember all the ways the world has sought to ruin her, and for the viewer, by extent, to get a thrill out of Dolores and her kin fighting back against this system. To make it even more horrific, the show makes it clear in a number of scenes that regardless of the nature of her programming functioning as “fate,” Dolores has feelings for her family and Teddy, and grieves for them whenever guests or other hosts “kill” them. Dolores might be fated to live out a select number of narrative paths each day (and thus arguably never has anything approaching consent), but the nature of her short term memory and her emotional range make it obvious that she suffers real pain and strife from her interactions, with the only true fate she’s dealt being one of constant suffering.

The show seek to juxtapose its sadistic interpretation of fate with the beliefs of Dr. Ford (Anthony Hopkins), Westworld’s resident Dr. Frankenstein. Ford’s scenes are on the surface some of the most sympathetic and humanizing moments in the show, particularly when we’re first introduced to him after he has snuck down to cold storage to have a drink with a malfunctioning old host. Ford views this early, broken creation not as junk but as a sign of how far his work has evolved. As he tells his protege Bernard (Jeffrey Wright), humanity itself owes its existence to mistakes because mistakes are the only real tool evolution has. And by removing mistakes from the equation, we’ve essentially brought our development to a dead end. Ford claims “this is as good as we’ll ever get” and apparently as good as we’ll ever get is malicious, bored beings who create clones of ourselves to act out all of our immature desires. But the more we see of Ford, the more clear it becomes that he views humans and robots alike as experiments for him to play with and any emotions or motivations that arise out of that are just “mistakes” to help him get closer to perfection.

If Westworld was a more aware show, Ford could be perceived as reflective commentary and you could argue that the show’s use of rape as origin and various iterations of the beautiful corpse trope are commentary on the way writers of “mature” material always gravitate towards the same sexist symbols, i.e. the same mistakes. But Westworld is not Ex Machina and it lacks any self-awareness. Alex Garland’s film made it clear that neither the human who designed its robots nor the human who designated himself the savior of the robots were good people: they both selfishly wanted that film’s artificial intelligence to give them their desires. Ex Machina communicated this masterfully in a scene that had Domhnall Gleeson’s Caleb dream of escaping with Alicia Vikander’s Ava, revealing that in his fantasies she remains a robot instead of a human, and thus subservient to him. Westworld by contrast only gives you enough information to be disgusted by the actions of the park’s management and guests but stops just short of condemning itself and its viewers for getting off on voyeuristically observing their acts. If this wasn’t clear enough, the show’s most blatant self-aware commentary is when the park’s head writer complains that people don’t want realistic hosts because that ruins the entertainment.

This is why so many of the women hosts in Westworld are beautiful and nude when we see them. This is why the show only briefly touches on the idea that women might also want to utilize a sexbot and even then it’s a throwaway gag line played for laughs. This is why the deaths of the programmed baddies in the park are so gratuitous and profane. This is why Dolores is never given an actual arc or deep characterization, reduced only to motivation and violent erotic beauty. Ex Machina tricked you into believing Caleb was a “good guy” until it pulled the rug out from underneath you and showed how not only was he selfish and despicable, but you were too for viewing him as a more important character than Ava, and was all the more powerful for that. Westworld may still have an entire season to reach that point, but its pilot does nothing to indicate that it has any interest in asking how close its viewers and its fictional park guests actually are, to say nothing of the park management and the show’s writers. All it seems to want is to provide just enough realism to mark it as “mature” without having to confront its hefty problems and what they say about us as a viewing society.