You are here: Home / Features / What Are Thooose on the Set of Batman v. Superman?

The sequel to a film that received a middling response from critics and took in a modest (by blockbuster standards) box office, Batman v. Superman: Dawn of Justice was in a precarious position before reports of its ballooning budget started to make the news. After a string of expensive failures including Jupiter Ascending, The Man from U.N.C.L.E., and Pan most recently, Warner Bros. is in need of a box office hit. A movie that people don’t just go out to see, but that they go out to see twice. Batman v. Superman might just be that movie and we now have major evidence pointing toward that conclusion.

If you told me Zack Snyder couldn’t tie his shoes, I’d call you a liar. And then I’d scour google to find evidence of him wearing laced shoes in order to prove you wrong. Of course, that wouldn’t necessarily prove anyone wrong because Zack Snyder is a big time director now and could easily hire someone to tie his shoes for him every day. Maybe not in the time before his salad days, back when he was making his feature debut on the solid Dawn of the Dead remake. His wife and producing partner could have conceivably tied his shoes for him in the morning before heading to set but they were not married during production of that film so we can not assume cohabitation. The point is that I think Zack Snyder can probably tie his shoes but would prefer to wear those cool slip-on Vans with the black and white checkerboard pattern.

Zack Snyder has a reputation as a director that favors style over substance. Vans are the style over substance shoe when you’re dealing with someone that buys a pair of skate shoes but doesn’t necessarily skate. And why shouldn’t Snyder favor style? The director got his start in commercials where he had to work to present a clean, clear, and stylish series of images in order to entice consumers into purchasing a Subaru or Gatorade. And when we look at Snyder’s first three films, we’ve got a remake and two adaptations so Snyder was working with existing material and was being given the job of packaging it for film.

With his fifth film Sucker Punch, you really get a look at Zack Snyder, the Artist. And, yes, Zack Snyder is a goddamn artist. The guy went to study painting in England for a year after high school; that’s not something you do if you have a passing interest in art. The guy knows how to craft an appealing image and can explain to you exactly what it is that makes it appealing. Sucker Punch sees Snyder doing what he does best, creating a series of images to sell an idea but this time the idea was his. The movie is… not very good. It is the Vans slip-on shoe of movies; a terrible product with thin soles that cuts into your ankles but looks kind of cool.

His next and most recent film was Man of Steel and it is very much a movie by Zack Snyder, the Salesman and not Zack Snyder, the Artist. With the David Goyer script that rips practically the entire structure and visual tone from Batman Begins, this was mercenary Snyder being brought in to take a script that needed to be produced quickly and competently lest the Superman film rights come into contention again. This was a Zack Snyder that was brought in because he could tie his fucking shoes, most likely Timberlands, and get to work. 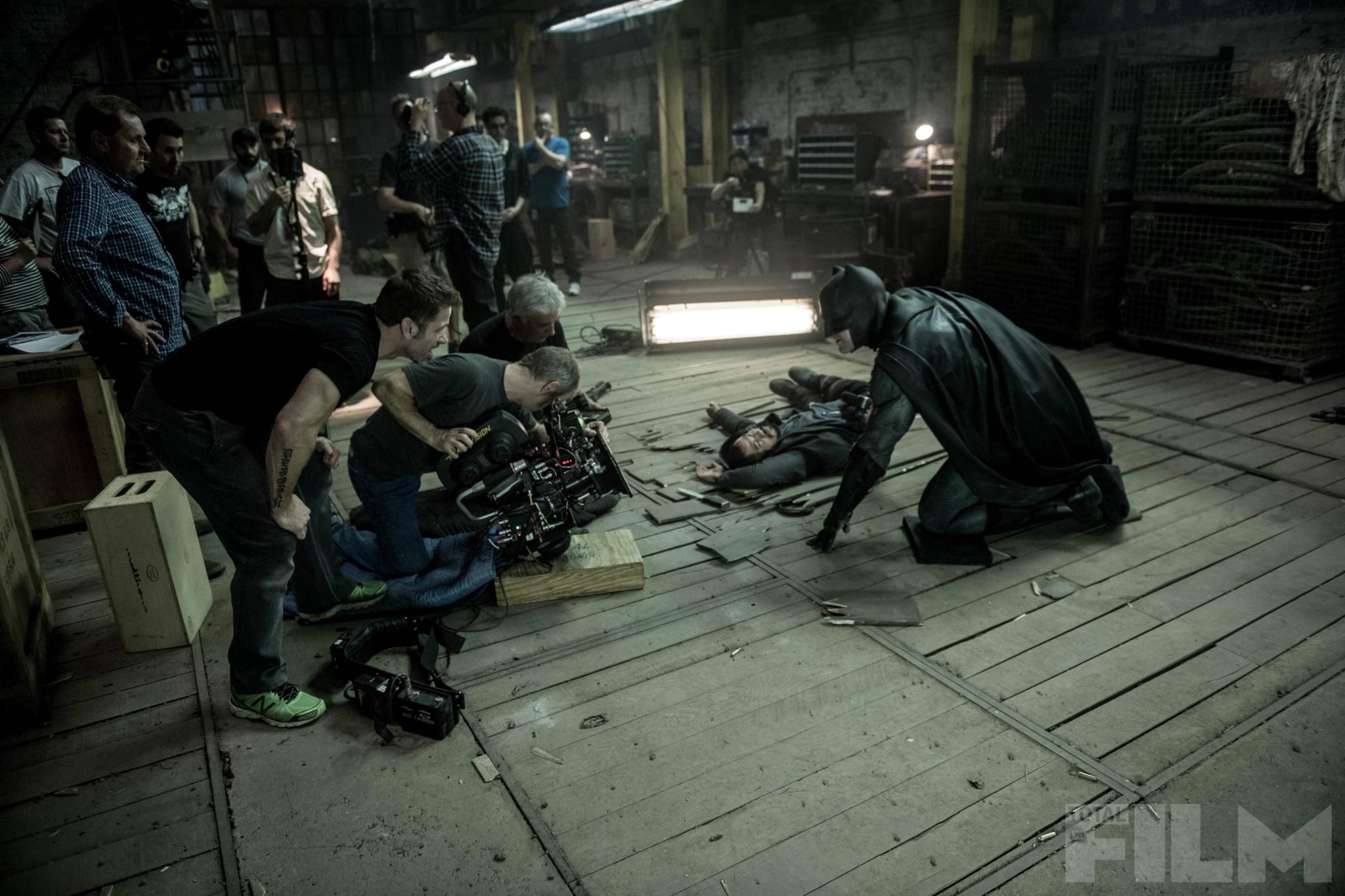 So why should we expect Batman v. Superman to be any different from Man of Steel? Simple: Zack Snyder’s wearing his good shoes on set. In a recently released set photo that demonstrates Snyder directing Ben Affleck, the director can be seen wearing a pair of New Balance running shoes. New Balance shoes hold the distinction of being the thinking man’s running shoe; the running shoe that communicates style while also demonstrating utility with the enforced soles and shock absorbers that give the feet, knees, and back relief. Style and substance cohabitate in New Balance unlike any other running shoe.

The Zack Snyder who wears New Balance shoes on set is a Zack Snyder that cares about the image and the quality of the package he is presenting to the world. We are seeing the marrying of the two Snyders for an entirely new director that eschews the mercenary quality of his early work and balances the indulgence of his artistic sensibilities seen in Sucker Punch. With this newfound knowledge, viewers can now head into Batman v. Superman: Dawn of Justice expecting an artistic, utilitarian product that is sure to serve as a functional film.

This feature was not sponsored by New Balance, but hey dudes, if you’d like Mark to lay other box office triumphs at your feet, drop us a line and let’s talk numbers.

Cursed with immortal youth and crowned King Baby by his legion of adoring fans, Mark Stack’s only comfort is that he loves comics more than anything. Heck, all of his English teachers have known it too, whether it was from him writing an analysis of dystopian themes in media using V for Vendetta or drawing a comparison in class from the serialized works of Charles Dickens to the comic book. Mark, desperate to stop a future where San Diego has sunk beneath the Pacific Ocean due to some King Baby prophecy, has fled to the more humid climes of South Carolina. You can read his work at Comics Bulletin, Eat.Geek.Play and more. He’s on Twitter at @MarkOStack