You are here: Home / Features / Who Will Survive in America: One Nerd’s Journey Into the World of Kim Kardashian: Hollywood

I feel like there are a few ways to respond to the inane in the world. Smart people usually respond with anger and baffled disgust—why does this exist? Why do people care? I’ve never thought that was a great reaction, though. I prefer to embrace the inane. I can’t guarantee that it makes the world a better place, but it’s a response that frequently makes my life more fun. That’s why, when I read this, I knew what I had to do. As an American citizen, as a free thinker, as a journalist, my responsibility was clear. I went to the Google Play store and there, in the top free apps, it sat, beckoning me. I gave in to the call, and my journey began.

Welcome to Kim Kardashian: Hollywood, a brightly colored fashion dystopia where all the photo shoots last exactly one hour and the only real currency is Kim Kardashian’s love. 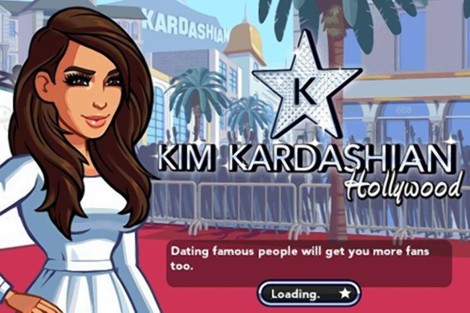 Contrary to what the title may imply, this game does not cast you as Kim Kardashian. Instead, you create your own kharacter to inhabit Kim’s world, and you start off as a lowly retail worker in the poor, dead-end hellscape that is…Downtown Los Angeles. But everything changes for you, well, basically immediately when Heavenly Earth Goddess Sailor Senshi Kim Kardashian walks into your trendy clothing boutique. When she arrives, you do what any good low-level employee would do when left alone with the store for the afternoon: You give Kim whatever she wants for free. For this act of awed generosity, Kim gives you the Greatest Gift of All in the New World Ordashian: her friendship.

From there, the game is the story of you riding Kim’s Christian Dior coattails all the way to C-list celebrity success. You go to fashion shows, get modelling and acting gigs, travel the world, and just generally neglect the hell out of your day job (Kim has given me a job at her clothing boutique in Miami, but I’ve yet to get beyond that because in the Kardashian klass system retail is forever). The game requires you to use energy to complete tasks, which you can replenish by waiting or by purchasing more with real money. As a reward for completing tasks such as “pose”, “mingle,” and “buy a shot of Immaculat vodka,” you get money, experience points, and K-stars, silver coins of super-money undoubtedly forged from Kim Kardashian’s tears of joy. Earn enough experience points, and you can level up, gaining new powers such as the ability to travel to Beverly Hills, where you can pay homage at Kim’s mansion. It’s basically Mecca, is what I’m saying.

An aside: In Kim Kardashian: Hollywood, the Hollywood sign does not bear the word “Hollywood”, but, as you might have already guessed, “Kardashian.” I have a lot of questions about this. Has Hollywood been renamed Kardashian in this universe? Why, then, is Hollywood so prominent in the naming of the game? And how do we know it’s named after Kim? Maybe in the last third of the game it’ll be revealed that Khloe is the real God-Queen in a His Dark Materials-style twist. And then the Kardashians will wage war.

It’s a pretty simple game—the most complicated problem I ran into was the mystery of why Kim wanted to throw me a birthday party when it very clearly wasn’t my birthday—designed for filling up breaks at work and maybe convincing you to fork over some cash. Most of the gameplay is a basic resource management video game, giving you choices in how to allocate your energy in order to get the most money/stars/fans. But as I played, the strangest thing started happening.. Magical, really. Somewhere in the midst of enjoying Kim Kardashian: Hollywood ironically, I started actually enjoying it. The roleplaying fantasy offered here is fairly robust, with open customization options, including branching quest (?) lines and the ability to date whoever you want, male or female, which automatically makes this game more progressive than the entire company of Nintendo.

But here’s the real kicker: the game is funny. Not just in the out-of-context, it’s inherently hilarious that this game advises you to choose romantic partners to maximize fame sort of way. But in a full-on, self-aware, this game was made by total fucking geeks sort of way. An early mission is called Mr. Manager, and someone on twitter spotted an honest-to-god Babylon Five reference in here. The writing has frequent moments of wit and awareness, as if the people tasked with writing this game understood the ridiculous nature of the proceedings as well as you do and decided to run with it. 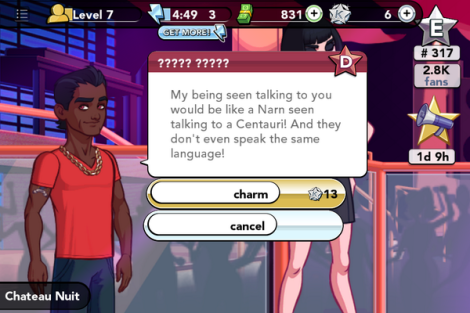 Hat tip to @sproutella for catching this

The comedic centerpiece of the game is the rivalry it allows you to develop with Paris Hilton-clone Willow Pape, who is just the worst. Here’s an example of the kind of shit she throws down: “A NOBODY ruins the party and I get kicked out? How does @JakeMuncy even know @KimKardashian? Total CONSPIRACY! #Illuminati #Obamacare”

I had to investigate with an outside source to confirm that I wasn’t getting Stockholm syndrome, but I’m pretty sure those hashtags are funny. And the game is full of little touches of self-aware personality like this: a manager who doesn’t understand smart phones, a publicist with psychotic anger issues, and an utterly beleaguered club manager (“And if anyone asks, our drinks are NOT watered down.” “Aren’t they?” “Not if anyone asks!”).

And while we’re on the subject, I did not ruin that party: I just told it like it was.

Ahem. I think those of us who fall under the “gaming enthusiast” demographic are inclined to write off games like this because of their subject matter or their simplicity, but there’s good craftsmanship here. Someone obviously worked to make this game fun and goofy, and to write it off as a cynical cash grab because it’s marketed at a mass, reality-tv-loving audience would be a mistake. If you hate celebrity culture or think that Kim Kardashian is the worst, then maybe don’t download this. But if you need something to do during your breaks at work, and you’re not opposed to silly lifestyle sims… add me. I need the fans. If I don’t keep getting more famous, I’m afraid Kim will never introduce me to Kanye.

Why won’t you let me meet your baby daddy, Kim? After I made you that friendship bracelet? It was pink. Like my heart.

Jake Muncy is a freelance writer, editor, and poet living in Austin, TX. In addition to working as the Games Editor at Loser City, his writing appears on Ovrld and anywhere else he can convince people to post it. You can contact him by email or twitter, where he tweets regularly about video games, the Mountain Goats, and sandwiches. He has very strong feelings about Kanye West.