Comics are a visual medium, but so often criticism of the medium hinges on narrative, ignoring or minimizing the visual storytelling and unique structures that make comics so different from cinema and photography. We’ve decided to change that up with a feature that we’re calling Anatomy of a Page, in which we explore pages and panels that showcase the language of comics and how the best visual storytellers maximize the freedom of comics in order to tell stories that can’t be told anywhere else. Today, Austin Lanari focuses on tight paneling in Tite Kubo’s Bleach and the way that smooths out action, with an added boost from the explosive lettering.

I have been reading a lot of Bleach lately. That is partially because I have been reading way more manga in general, partly because the newest chapters have, at least to me, been a lot of fun, and mostly because I got a good deal on the first handful of volumes on Ebay. Here is a page that stuck out to me for two reasons. Oh, and just in case you’ve had your head stuck in Western comics for a little too long, this page reads right-to-left. 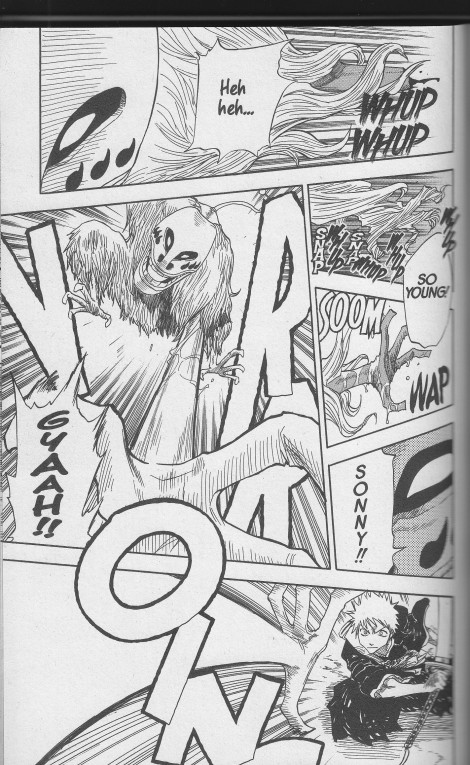 The first reason this page grabbed me is the essence of how I approach Anatomy of a Page: there is at least one really fantastic feature of this page that makes the narrative as a comic especially impactful on the reader. The feature that stood out to me was actually a lettering decision, but we’ll come back to that.

Here, the neophyte Soul Reaper Ichigo is facing a hollow known as the Grand Fisher. More specifically, this page in particular is about that claw protruding from the Grand Fisher’s hair and then extending at a great speed towards Ichigo. It’s sort of silly, really, if you take the time to think about the fact that this is, quite literally, a page of story about something that a claw is doing. The job of a good pictorial narrative is to take something that shouldn’t be all that interesting and really sell it as a narrative.

Look at how mangaka Tite Kubo breaks up the right side and the left side of this page. Ichigo is sort of crammed in the bottom right corner and, on the page, he is the exact same size as the three panels (and four story beats total) above him. The left side of the page is solely focused on Grand Fisher and the extension of his claw, while the right side focuses more on the appearance of the claw.

The final flourish of this page is that the final two moments vertically on that right side–Grand Fisher calling out Ichigo for his youth and inexperience, and Ichigo standing at the ready, somewhat shocked–help to elevate this page and make it just as much about the contrast between Ichigo’s inexperience and the Grand Fisher’s weathered malice.

What deserves far more attention than I will give it here (though I hope to expand on this someday soon), is the second reason that this page is so notable: the lettering. When Grand Fisher first extends his claw towards Ichigo at great speed in the penultimate panel, he shrieks “GYAAH!!” and the SFX bridge one panel to the next with a “VOING” (I’m assuming that last letter is meant to be the top of a “G”; ultimately, this isn’t that important). The brash lettering here helps you get from Grand Fisher’s big moment on the left in the penultimate panel, back to the right side where Ichigo finds himself in a bind.

The lettering decision was why I originally picked this page to be featured; but then, I realized something. The SFX were in English (at least, onomatopoetic English). This wasn’t even Kubo’s decision, nor the decision of a lettering assistant of his: it’s esseentially a translation decision (as well as a lettering decision), but one that potentially flies in the face of Kubo’s original rendering of the page.

Here is the same page from a scanlation. For those who don’t know, that means this page was scanned from the original Japanese edition and then re-lettered by people in their free time for free consumption by people who couldn’t read the Japanese. I don’t encourage reading scanlations, by the way. But that’s a tangential ethical discussion. 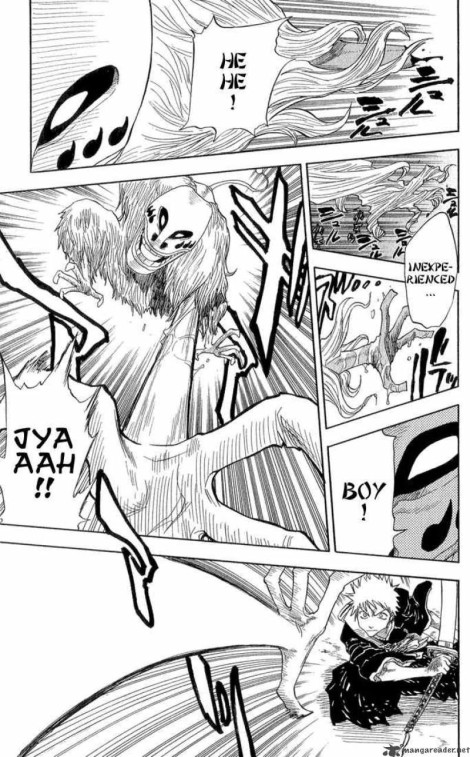 As you mighit have expected, Kubo’s “lettering” for his SFX is in Japanese. But look at how dramatic the difference is between these pages! Whoever translated and lettered the SFX going between the penultimate and final panels had some serious genital fortitude. Kubo’s original art looks naked by comparison, and though the page as a whole is still exceptionally clever, I am left with the impression that Kubo is underselling his own artwork by not making an equally heavy-handed decision in his original art. It’s probably a bad thing that the translation leaves me disappointed with an original artistic decision.

And by the way, the Japanese sound happening here is not “VOING,” and I’m not even sure that the noise here is analogous to “VOING.” But whether or not the bolder English SFX is a literal facsimile to the Japanese original is unimportant for our purposes. What’s far more interesting is the fact that an extra layer of artistic decision-making is present on this page and it has, in my opinion, a substantial impact on the readability of this page.

Again, translation is a subject that deserves more critical discussion from many more angles, even just as far as SFX are concerned. For the record, all chapters of Bleach I’ve read for the last year have Kubo’s original Japanese SFX, and they mesh quite well with his now much more experimental style of page layouts. I am not quite sure at what point Viz decided not to translate the SFX in Bleach anymore, but I am very curious as to whether they stopped 1. because of how labor-intensive it is or 2. because they were worried about how much they were sometimes adding to pages like this one.

Austin Lanari is a recovering philosopher who can never catch up with any of the goddamn anime he wants to watch. He disgorges comicy thoughts and criticism for Comic Bastards and on his own blog.  You can read those thoughts and less on Twitter @AustinLanari.