You are here: Home / Features / Anohni’s Hopelessness is a Gratuitous, Tin-eared Trainwreck 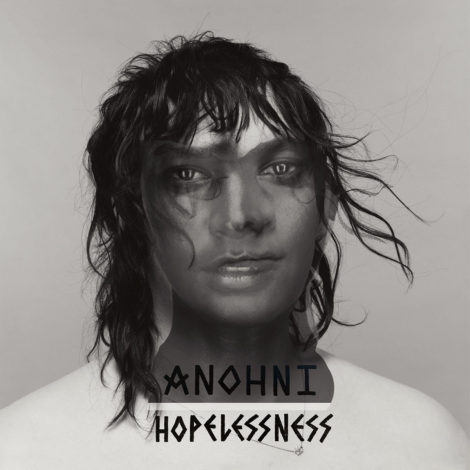 I have a deep fondness for the work and words of Anohni. Her essay last year about why she chose not to perform at the Oscars was a welcome kick in the ass towards a media event that much of us somehow forget is literally an idolatrous celebration of corporatism and mediocrity; her work with Antony and the Johnsons is some of the very best baroque pop of the 2000s, in a decade that arguably represented the pinnacle of that genre. She has consistently shown herself to be a thoughtful artist who is capable of devastatingly beautiful works.

With that out of the way, it gives me no pleasure to say that Hopelessness is a disaster of an album. It’s grotesquely overproduced and lyrically unforgivable, an artistic misfire on the level of Leonard Cohen’s Death of a Ladies Man.

The parallels between Hopelessness and that infamous record are striking: both are maximalist productions recorded by artists known for their intimate minimalism, Cohen’s record produced by Phil Spector and Anonhi’s spearheaded by Ross Birchard, aka festival overlord Hudson Mohwake. Both are loose concept albums, Ladies Man about bitter, mean sex and fruitless debauchery and Hopelessness an attempt at mixing personal notions of sex and romance with geopolitical activism. Both are awful, ignoble failures. But while Cohen’s misstep has justly been panned and forgotten, Anonhi’s sonic debacle is inexplicably fielding rave reviews from all corners of the music press.

Hudson Mohawke was a worthy collaborator at the hands of Kanye West, responsible for producing some of the best moments on both Yeezus and The Life of Pablo, but his trademark EDM bombast is a cancer on Ahoni’s tender, sonorous voice. Syrupy, high-pitched synth blasts and thudding bass overpower her vocals at every turn, which wouldn’t be such a problem if the beats themselves made for good dance music. Unfortunately, they are bland, forgettable compositions, nothing if not loud but anything besides exciting. (Oneohtrix Point Never is a coproducer, but I don’t mention him because his influence is to be felt nowhere on the album.)

But not even the canniest of producers would be able to fix the true problem lying at the heart of this record: Anonhi’s vocals are as lovely as they were 10 years ago (and she has, if anything, grown as a singer since that time) but her lyrics are laughably, preposterously awful. Whether it’s the hackneyed Big Brother anthem “Watch Me” comparing government surveillance to an overbearing parent or “Execution’s” conflating of sex and lethal injection, there’s no metaphor too obvious to chase down and beat into the ground, no political notion given more thought than a high school book report on Catch-22. Special mention must be given to the song “Obama,” which begins with the lyrics “When you were elected/The world cried for joy/We thought we had empowered/The truth-telling envoy,” and whose chorus is the word “Ooooobaaaaaaaaammmmaaaaaaa” strung out over a trip-hop beat.

I could write for hours about why this album is such a mess, but I can’t help but feel as though something deeper is happening regarding its reception. Hopelessness is a failure at every conceptual and aesthetic idea it attempts, but it’s pulling in stratospheric reviews: a 9.0 from Pitchfork (the same score they gave the aforementioned Life of Pablo), 5 out of 5 stars from the Guardian. Clearly this album is striking a chord with people (or at least critics,) so what’s going on here?

To my mind, a significant factor might be that we’ve been hurting for protest music in the Buffalo Springfield/American Idiot-era Green Day vein for the entirety of the Obama administration. This is significant: we’ve lived through Occupy Wall Street, the assassination of Osama Bin Laden, the Arab Spring and the massacre at the Bataclan without experiencing any music that feels like it truly, spiritually captures the zeitgeist of the world’s struggles. (Obviously many tremendous socially conscious hip-hop records have been released this decade, spearheaded by Kendrick Lamar, Chance the Rapper and many others, but as always “blackness” is portrayed as mutually exclusive to universality, so these records are frequently seen as addressing specific problems as opposed to the overall spirit of the nation, and really, this critical issue should be explored in an essay of its own) Hopelessness, as bumbling as it is, does at least attempt to explicitly address a zeitgeist in a way that pop music has tiptoed around for years.

And of course, you can make many of these same arguments against other beloved “conscious” albums of the 20th century. Stevie Wonder’s music, Songs in the Key of Life in particular, has a bright sheen of production and sense of lyrical naiveté that is not unfamiliar to Ahoni’s latest album. Like Hopelessness, it also blends the personal and the political. But Songs has sprawl, it has musical chops, it has an extraordinary range of sonic variance. It is ideologically concise and deeply purposeful in its overall structure.

Setting aside the vocals, there is no craft to Hopelessness. It is not meticulous in its message and phrasing (To Pimp a Butterfly) or furious enough to make up for its technical shortcomings (the hardcore punk of the 1980s). It is a loud blob of undercooked ideas that is too stupid to be protest music, too flaccid to be dance music, grandiose and incompetent in equal measure and at every turn. But it is something. And right now, at the potential dawn of a Donald Trump presidency, at the end of a long stretch of mainstream artistic indifference concerning the ills of the earth, something might be all we’re looking for.