You are here: Home / Features / Devin Faraci and the Cost of Unearned Second Chances 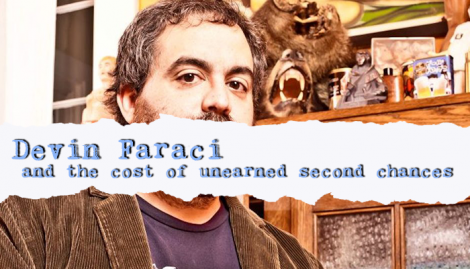 Not long after the major success of a campaign to host women only screenings of Wonder Woman at their theatres in an effort to make for a safer viewing experience, the Alamo Drafthouse found itself receiving intense media and fan scrutiny for a decision many viewed as actively harmful to women. Citing his passionate belief in “second chances,” Drafthouse CEO Tim League announced he had rehired Devin Faraci after he resigned following public allegations of sexual assault. League and the Drafthouse had initially received support for standing by Faraci’s victims and the decision to bring him back on was viewed as a betrayal of trust and values, particularly once it was revealed that Faraci had actually returned to work for the Drafthouse as soon as a month after his “resignation” and that League had requested that journalist Kat Arnett, who reached out to tell League about her experience being harassed by Faraci, keep her accusation private so they could “move forward with the BMD brand.”

The entire situation is unfortunately one in a long series of examples of men in media who harass and assault others only to face no real repercussions as their peers and employers insist they must be given a “second chance.” As film programmer Todd Brown put it in a statement he issued after resigning from the Drafthouse’s Fantastic Fest in protest of League’s actions

“There it is, the Club utterly ignoring the victim while it creates a protective ring around the perpetrator. Telling every woman who has ever been harassed or assaulted that the predatory males around them will be protected if they are a part of the Club.”

The actions of these men are always presented as isolated incidents, no matter how regularly they engage in such behavior, because the myth of the second chance for a sexual predator requires viewing an entire history of behavior as a single act. In Faraci’s case, even before this round of sexual assault allegations he was known within the film and criticism communities as a bully and predator.

Amy Zimmerman of the Daily Beast summarized Faraci’s long history of awfulness in an editorial on the most recent situation, reminding readers that this was a man who once urged a rival writer to kill himself, who participated in a troll campaign against another critic for her opinions on Jessica Jones, including retweeting “jokes” about her experiences with rape. League’s initial statement about the return of Faraci focused on his belief in second chances but refused to acknowledge that his disgraced friend wasn’t being granted a second chance, but more accurately a twelfth, or twentieth, or thousandth chance.

League and sympathists before him also lack consideration for who should actually be offering a known predator a second chance. It’s not just the feelings of the victims of these men that are ignored but the safety of others who could be newly victimized by predators when you allow them to return to a position of power. We might as a community agree that second chances are possible, but they must be given only to people who have proven they’ve earned a chance to redeem themselves and even then only with certain restrictions that limit their ability to do fresh harm if they fail. Putting a known predator like Faraci back in a position that he actively utilized in the past to harass, assault and exploit others is dangerous and irresponsible.

Within the geek community, there are a depressing number of examples of men who have been offered such second chances over and over and never apologize for their behavior or work to redeem themselves. In 2015, Janelle Asselin at Graphic Policy reported on Dark Horse Comics’ ongoing issues with editor Scott Allie, who harassed and assaulted staff so much in his 20 years at the company he was referred to as “Bitey the Clown.” Dark Horse publisher Mike Richardson’s defense and sheltering of his troubled friend culminated in an incident where Allie bit contributor Joe Harris and forcefully licked a former employee’s face in public at an industry party. Asselin quoted internal sources who claimed that their complaints to management about Allie and his behavior were not acted on and that “the lack of visible reprimand leads us to fear Scott will continue to hurt people.” Nonetheless, when Richardson issued a statement on Asselin’s article, he claimed “action was taken immediately,” but added that “we did not, and cannot, perform a public flogging, as some might wish.” Instead, Richardson, like League, insisted that he had the “goal of changing behavior,” even though Allie’s behavior over two decades seemingly remained consistent.

Dark Horse’s behavior mirrors DC’s ongoing protection of Superman group editor Eddie Berganza, who was given a “second chance” in 2010 after a number of women who worked in the Superman group, including Janelle Asselin, reported his behavior to management. And then he was given a second “second chance” in 2012 when he harassed a woman at WonderCon. DC would go on to claim that there had been no other incidents since, but the unofficial policy of seemingly quarantining Berganza in an all-male office and not letting him represent the company at conventions likely has more to do with that than a sincere change of behavior. Berganza was notably only outed because DC laid off Vertigo editor Shelly Bond, prompting comics editor and publicist Jennifer De Guzman to point out how frustrating it was that Bond lost her job while DC continued to employ a known harasser. This is necessary to keep in mind because it makes clear the way men like Berganza get protection from their employers while others who are in less privileged positions lose their jobs for comparably smaller infractions, like diminished sales. A woman like Bond loses her job because DC needs to “make room,” but Berganza, who put the company in danger of lawsuits, victimized coworkers and was himself overseeing a flagging line of books, is allowed to remain.

Of course, this epidemic of giving predators countless “second chances” is not restricted to the geek culture sphere. Jim DeRogatis has urged the music industry for years to stop enabling R. Kelly, claiming that Kelly is essentially a serial rapist who preys on young black teenagers in Chicago and now appears to be isolating and brainwashing young women, things that arguably could have been prevented had the industry taken Kelly’s illegal relationship with Aaliyah when she was only 15 more seriously. This year, Louis C.K., who has allegedly sexually assaulted women in the comedy scene, is receiving acclaim from critics for making one of the most “thought-provoking, gut-busting conversation-starting” films in I Love You, Daddy, which explores the industry’s treatment of predators like Woody Allen and Roman Polanski, while in real life Tig Notaro is demanding CK address the allegations against him.

What is consistent in all of these situations is that “protective ring around the perpetrator” that Brown mentioned in his statement on Faraci. Faraci is protected by a film bro community that doesn’t want their friend to “not pay the rent” just because he made a “mistake,” Allie is protected by his friend who just happens to also own the company he and his victims work for, Berganza is allegedly protected by a friend who works in HR as well as his friends in management, while Kelly, Louis CK, Woody Allen and Roman Polanski are protected by their admiring peers, business partners and overzealous fans. And so they continue to get second chances, harming innumerable “second” victims, the protection around them sending out a very clear message that men deserve second chances more than victims deserve to be heard and respected.

Refusing to buy into the myth of the second chance as it relates to sexual predators won’t fix the problem of sexual harassment but it would certainly help discourage men from acting badly and then using questionable excuses, like a drinking problem or drugs, to get away with their behavior as long as they can pretend to seek redemption. Victims deserve the right to determine who gets a second chance and how that second chance works and the least we can do is given them that opportunity rather than continuously deciding for them. Maybe Tim League understands that now that he has once again tendered Faraci’s resignation after public outcry, but regardless of whether he does or not, the passionate, vocal response from the community condemning his actions is something that must continue to happen when these situations arise. Because if the people who help these predators get away with their behavior are unwilling to make those predators face repercussions for their actions, it’s up to the community to make sure both the predators and their defenders are forced to deal with what they’ve done and enabled.