You are here: Home / Features / Eye in the Sky: Drones and Long Distance Killer Narratives

There’s a long history in warfare of truly heinous acts being committed in the hopes that it will ultimately save lives. Dresden, Hiroshima, Nagasaki — these come to mind for most immediately. But in our current era of technological hegemony, innocent lives and constitutional freedoms are dually sacrificed in the name of some kind of questionable safety through the terrifying implementation of all-seeing drones. Chris Lewis and Bruno Oliveria’s formerly web based series Drones explores not just the horror of living under drone “protection” but also of the inherent surreality of that. To wit: we now exist in a society where our government has decided the best way to protect its citizenry from terrorists who hate our freedom is with weapons and intelligence that function by sacrificing significant portions of that freedom.

That’s an intriguing premise, and when Drones first appeared in webcomic form I thought it had a lot of potential as a result. I gave it ample leeway, going so far as to say it mostly delivered on that promise. But that review was written in June of 2013, several months before Matthew Power’s seminal investigative piece “Confessions of a Drone Warrior” was published at GQ. In the time since, Power has died and our awareness of the ugly truths of drone combat and digital surveillance have widened. Only, you wouldn’t know that from IDW’s reissuing of Drones, where the series’ cavalier attitude towards the state of digital combat makes it come across as an ugly work, where the jokes not only fall flat but are outright offensive.

In contrast to Power’s depressing investigation on the true emotional toll drone pilots withstand, Drones the comic reads like a Mark Millar punch-up of American Sniper, bringing to life every exaggerated claim of jingoism against that film. The story’s ostensible leads, Mike “Stinger” Watson and Lani “Angel Eyes” Parvati, are blank slates who we learn next to nothing about, and not in that Chris Kyle sociopath sense. Both are sarcastic, impulsive figures, with Stinger viewing his craft as a testosterone trip, to the extent that his home built custom drone serves as a mobile phallic object, while Angel is a bit more responsible, preferring to ride out the post-kill hormones until she can jump Stinger’s bones in the relative isolation of her CCTV-packed Nevada residence.

The thing is, Power’s drone piece opened a lot of eyes to the plight of the “drone warrior.” Through Power’s eyes we see the drone operator as a troubled figure, someone who is tasked with carrying out dark deeds that other soldiers don’t understand and that can never be shared with the outside world. It’s a thankless job that involves being isolated in a small, pungent room with other sweaty operators for inhuman hours, killing enemy combatants from thousands of miles away and then documenting the results in gruesome detail. Not exactly the type of thing that inspires humor or amorous extracurricular activities– from Power’s telling, drone operators are likely to be depressive and anxious, wracked with guilt and desperate to win over career military figures who view them as nerds living the high life behind computers.

Drones was first unleashed at a time where “drones” the concept was something alien, inhuman. Understandably, Lewis and Oliveria tackle the subject with sardonicism, intending the comic to be like a tech savvier take on Team America. Is it too much to ask a creative team to modify or even rewrite a story that was less offensive a few years ago for its mainstream release? Perhaps. But isn’t it unrealistic to ignore the changed climate, to not factor in how a national mood in regards to foreign policy being carried out by real human pilots of digital warbirds might alter an original opinion of that work?

These are questions I’m particularly obsessed with in the wake of American Sniper, a film that was judged in the court of critical opinion for crimes it did not commit on the screen. Theoretically, Drones is a more liberal work, by more liberal creators, which seeks to lampoon “patriotism” and the war on terror, to explore the idea, in Lewis’ words, that terrorism is “the biggest form of entertainment today.” Theoretically, Drones stands at the opposite end of the spectrum from American Sniper, a work held up in some characters as irresponsible in its glorification of military might. But in execution, American Sniper comes across as a far better examination of the life and problems of a long distance killer.

Drones seems incapable of dealing with any of its moral conundrums with anything other than a smirk. It jokes about 72 virgins promised to suicide bombers, it has characters viewing any man with a beard and a turban as a terrorist then being proven correct in that assumption. Its protagonists celebrate a VIP kill with an illegal fuck, complete with a thermal targeting close-up on their uglies bumping. The first issue even climaxes with the introduction of a Vegas casino built around providing tourists with the full jihad experience, from arrival to kidnapping to threat of beheading, something Lewis can’t believe hasn’t been made into a real resort yet.

Yet obviously I do not believe this is a work that will receive even a small percentage of the vitriol thrown American Sniper’s way.

Yes, American Sniper is a major motion picture that has raked in hundreds of millions of dollars in revenue. Yes, it was directed by Clint Eastwood, a problematic Hollywood director with shifting political views. But American Sniper is also a work that does not shy away from harder, deeper questions. American Sniper is a film with essentially a real life superhero at its core, complete with all the fabrications, exaggerations and tragic endings that requires. That hero is forced to come to terms with the unethical, brutal actions he commits in the name of saving loved ones and “innocents,” he is forced to make split second decisions about the lives of men, women and children he has never met and will never know in order to save men he does know, in the name of a family he almost never sees.

Early on in Drones, Stinger takes down a high value target who is flanked by bodyguards and a goat. Oliveria gives us a missile cam view of these men and this goat shortly before their death. We see the men walking, carrying their guns, wordless. We also see the goat, comically braying right before the final fatal moment. This scene is eerily paralleled by an anecdote from Power’s piece, detailing one of the first big operations the drone operator he profiles carried out. In that mission, this drone operator is also taking down a high value target, but shortly after he has called in the missile strike, he sees what looks like a young child, even though he had been told the target area had been cleared of civilians. After the mission, after the operator has been forced to zoom in on men dying by the impact zone, bleeding out from hideous wounds, his superiors tell him it was not a child he saw but a dog. 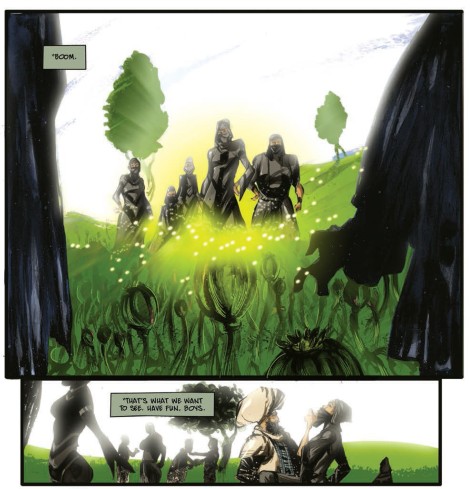 That first strike we see in Drones features similar uncertainty but it’s radically flipped. Instead of questioning whether the goat was just a goat, Stinger is shaken by a hallucination. In the blast he believes he sees his victims being met by the virgins he jokes about. He thinks sees these jihadists kissing the lips of untouched women. He is more troubled by the prospect of these targets meeting some semblance of happiness than by the fact that he killed a number of people, that he killed their animals as well, and maybe other unseen figures in the surrounding countryside. When he beds Angel Eyes not long after, he is unable to get it up and the implication is that he can’t get an erection because he showed weakness in the drone offices. By viewing his targets as human, by thinking of the afterlife they imagined for themselves, he emasculated himself.

You may rightfully wonder if I’m reading too much into this, but in the backmatter for this IDW release, Chris Lewis immediately asks “Does terrorism turn you on?” From there he speaks of drones as flying sextoys, “aerial masturbation,” dwelling on the intersection of the first Gulf War and his own puberty. Lewis defends all this as commentary on our national obsession with terrorism, but I don’t know that I agree; American Sniper, after all, is a film that is almost prudish, its big burly sex icon Bradley Cooper given moments of seduction but ultimately treated as an inhuman beast, a “legend” with a beautiful wife and a baby on the way who would rather return to duty endlessly than cave to any base impulses.

There is also the question of Oliveria’s artwork, featuring as it does mostly blank backgrounds and cartoonish features. The moment where Angel Eyes seductively presents herself in just Stinger’s dress shirt is almost androgynous in its detail; she’s more fashion drawing than sexual, lacking curves or discernible features of any sort other than skin tone. There are plenty of hints of sex, plenty of moments of sexual insults and demands, but like a drone sex toy, this is a work of all symbols, no substance, no eroticism, no maturity.

If you read “Confessions of a Drone Warrior,” it’s clear there is a great drone operator story waiting to be told. It’s the kind of story that intersects with national digital paranoia and concerns over a loss of humanity, that delves into the inherent voyeurism of all warfare since Vietnam and the mindset one must adopt in order to be a perfect soldier, whether that’s through physical combat or the piloting of mostly digital weaponry. Drones is not that story. Drones is not a story that is even sure what it wants to do or wants to say. Instead, it’s a sign of squandered potential, a brilliant idea hampered by its unwillingness to tackle its subject head on rather than poking at it with the stick of cavalier disregard for reality. But maybe its immaturity is a sign of development, an acknowledgement that there is a story waiting to be told and we only have to grow into it.

Drones is out tomorrow, April 22nd, from IDW.