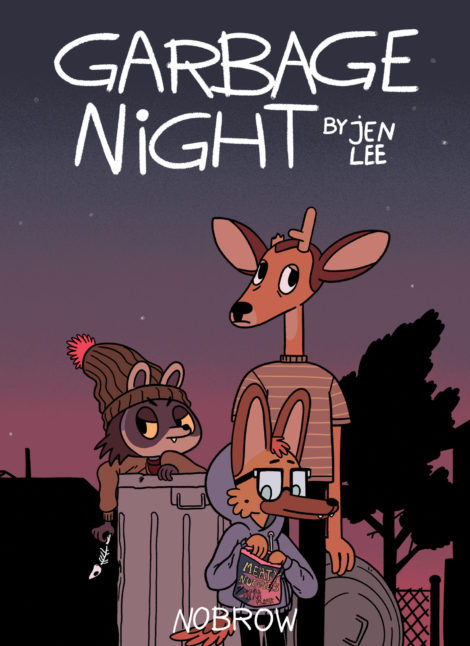 Given Hollywood’s propensity for revisiting classic, beloved works and giving them a twist, it’s a little odd to me that no one has rebooted Homeward Bound as a Life After People-style post-apocalyptic work. But that’s okay, because Jen Lee is nicely filling that void with her new work Garbage Night and its predecessor Vacancy. Where Hollywood would likely still find a way to center humanity in the story, Lee’s work also stands out for its distancing of humanity, leaving the detritus of people at the forefront as a reminder of our talent for ruining environments while emphasizing the emotional scars and loneliness the domestication we hold so dear leaves on our animals once we abandon them. Think of Garbage Night as Homeward Bound where the animals aren’t trying to reunite with humans but instead attempting to escape the legacy of people.

Though Garbage Night functions perfectly well as an all-ages title, it’s the melancholy of that legacy theme that makes it such a rich, mature work. Writing about Vacancy in our 2015 Best of feature, Daniel Elkin highlighted the way Lee’s “cartooning seduces you into one set of emotions – comfortable and familiar in a Saturday Morning sort of way – while the story itself murmurs something strange off to the side, almost hidden in the forest” and that remains a strength in Garbage Night. But this time around, Lee mostly moves the story away from the derelict suburban space her characters were calling home, taking the gang on the road not to seek out civilization, per se, but to find less scavenged ground in a different derelict space.

This narrative development gives Lee far more room to explore her main characters, and also allows Garbage Night to stand on its own as a connected but basically separate story. Simon, the lonely dog who wishes he was wilder than he is, remains the protagonist, and Cliff the raccoon and Reynard the deer are fully fleshed out as friends rather than reluctant companions. It’s been a year since they first met in Vacancy and the supplies in Simon’s hometown are dwindling, but they’re unwilling to leave the comfort of “home” until a hunting dog named Barnaby wanders through town while they’re scavenging.

Vacancy mostly sought to illustrate the anxiety that comes from being on your own for the first time and the fear of stepping outside of your comfort zone, be it to make friends or find opportunities. But Garbage Night is about the way encountering new people can shift your perspective, and also provoke rifts in your existing relationships. That aligns it far more with the likes of Homeward Bound and its fragile friendships and the delicate balance that all friend groups have to maintain. It’s also about Simon’s struggle with his concept of who he should be and who he actually is, with Barnaby serving as a fantasy version of Simon as well as a worst case version of him to his friends.

What’s especially thrilling about Lee’s exploration of this is that Garbage Night also showcases Lee’s own development as an artist and her growing confidence. Much of Vacancy’s mood was communicated through muted palettes and a contrast of the small characters against the sprawling, eerie woods they tentatively explored. Garbage Night, however, is vivid in color and style, the panels are not as cluttered, negative space is embraced more, and more of the heavy lifting for the narrative and its themes is done by the characters themselves, who have a wider range of expressions than they did in Vacancy.

A casual flip through Garbage Night immediately shows what a beautiful, striking work it is, with impeccable pacing and masterful use of panel framing. This isn’t to say Vacancy wasn’t beautiful and striking, but it was a work that never seemed to give Lee’s creations room to breathe, every panel was full of immense detail and an almost oppressive use of color, which worked for its commentary on oppressive loneliness and anxiety but would not have functioned as well in this more open, contemplative story.

Though Simon is unquestionably the protagonist, Garbage Night is less his story than it is the story of how others view him, and the book succeeds because of how well Lee’s newly open approach centers the reactions and feelings of Simon’s companions. Even before a pivotal moment where Reynard tearfully breaks down as a result of Barnaby’s careless comments about his status as prey, Simon’s unwillingness to listen to his friends about their concerns about Barnaby is heartbreaking because we can see their patience wearing thin and their hurt coming through even if Simon can’t recognize it.

There is also an unexpected depth to Barnaby’s character, making it clear that while he’s selfish and inconsiderate, he’s not a “bad guy,” per se. In one key scene, Barnaby sums up his world philosophy as a view of his environment as “A world without walls, just doors.” Simon is initially drawn to this, because he believes himself to be an adventurer at heart, but as the story progresses he realizes he values loyalty and connection and could never be a wanderer.

Lee utilizes shifting color palettes to convey these emotional developments and epiphanies outside of the expressions as well, with the book beginning with bright pastels and whites then escalating to moody orange and reds as Barnaby irritates the pack, culminating in the melancholic purple and earth tones during Reynard’s breakdown. The combined effect of Lee’s emotional storytelling skills is profound, bringing to mind Jeff Lemire at his best, but with a higher level of detail and brightness.

There are few other creators in comics who are as consistent as Lee in this way. Other artists struggle to achieve mastery of character expressions and emotional coloring on their own, but Lee has mastered both and struck an incredible balance in Garbage Night. The effect is akin to Terrence Malick and Kelly Reichardt co-directing Homeward Bound, achieving an equilibrium between immense natural beauty and heartbreaking displays of uncommunicated feelings. Only with far more humor and personality than that pairing suggests. And there couldn’t be a better time for this kind of work to emerge– or a more surprising format for it to appear in.

Garbage Night is available to order now from Nobrow.