You are here: Home / Features / Judging the Book by Its Cover: The Synthetic Man by Theodore Sturgeon

As much as I agree with the old adage “don’t judge a book by its cover” as a life principle, I have to confess that I spend a lot of time picking up old books and records in bargain bins and thrift shops specifically because I judged them on their covers. I know I’m not alone in this, either. Cover design is a tricky thing but when it’s done well (or is mindbogglingly bad), it can stop you in your tracks and force you to consider something you otherwise would have ignored. If it happens to showcase an aesthetic you’re naturally drawn to, the effect can be even more profound, as was the case with the book that made me decide to do a series of essays on this subject.

Originally (and more regularly) titled The Dreaming Jewels, Theodore Sturgeon’s first novel The Synthetic Man was vaguely known to me as a sci-fi classic but I never knew anything about its plot, and I don’t remember anyone in my group of sci-fi paperback reading dork friends in middle school reading it. When I came across the Pyramid release that renamed it The Synthetic Man in a box of pulp sci-fi works at a local thrift shop, the cover caught my eye more than any vague awareness of the book or Sturgeon:

The cover is cluttered and murky in the way so many sci-fi paperbacks from the ’50s and ’60s are. Painted by Man-Thing co-creator and prolific horror comics artist Gray Morrow, featuring the same swampy hues you’d associate with Man-Thing and Morrow’s frequent publisher EC, The Synthetic Man cover isn’t a great work of art, but it’s weird and mysterious and eye catching. It’s also not at all representative of the actual story in any way, shape or form.

Personally, the cover and title, and the tagline “he’s too human to be real…and he doesn’t even know it!,” provoked ideas of some kind of android identity crisis story, a la Do Androids Dream of Electric Sheep? or Fallout 3’s “Replicated Man” quest. But The Synthetic Man is closer in spirit to Heinlein’s Stranger in a Strange Land, with the otherness and carnival setting of Freaks and Katherine Dunn’s Geek Love. It’s a surprisingly progressive story for its era, featuring a lead character rescued by some members of a roving carnival, raised as one of them and thus sympathetic to their culture and otherness. Sturgeon depicts the sideshow characters who raise our protagonist Horton as smart, capable, funny and nuanced and while there are some instances of standard ’50s sexism, for the most part Sturgeon makes the book’s women equally powerful and remarkable.

Where the cover matches what’s inside most is in the earthiness. Horton isn’t an android, he’s a “human” made by sentient crystals who create and/or rewrite organisms as part of their mating ritual. He can shapeshift and heal himself from devastating injuries and has a photographic memory, but he lacks creativity and problem solving, though his surrogate mother Zena did her best to educate him and make him as human as possible. The cover seems to depict Horton shooting lasers out of his eyes, but that is not one of his abilities, though it could be an artistic representation of the battle of willpower he has with his chief arch nemesis Monetre, the discoverer and manipulator of the crystals that created Horton and many of the sideshow’s ensemble.

When the story was originally published in the pulp magazine Fantastic Adventures, it had a cover that emphasized the crystals more than Horton, and seemingly features Zena holding a pair of them, though in the book she is a dwarf, not a pin-up figure (and none of the monsters in the shadows behind her ever appear either):

When the book’s first edition was released, that Fantastic Adventures cover was discarded in favor of a more abstract rendition of the same scene, making for a better fit for the book’s quiet, introspective tone and minimalist style: 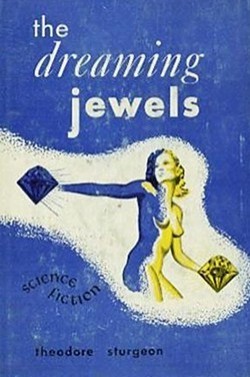 It’s an effective enough image that the newer edition of the book revives and modernizes it, distorting the image of the woman with twin crystals so that it’s more mysterious and not as recognizable, and arguably more striking for it. It also communicates the quiet eroticism of the book:

Compare that with some of the ludicrous covers the book was given over the years that make it seem like a freakshow horror text instead of a thoughtful examination of what it means to be human:

All of these seemingly focus on “Junky,” a jack-in-the-box that Horton has a seemingly unhealthy connection to (though that Nova edition could also be an illustration of the creepy foster father who abused Horton and later reappears as an antagonist). While Sturgeon makes it clear that Junky is ugly and throughout the first section of the book a number of things happen to Junky to make it even more twisted, it’s never treated as a creepy or horrifying object. And while Junky does improbably end up becoming an important plot point, the decision to make Junky the focus of one cover let alone several is misguided and odd. Had the thrift shop put any of these editions in the box, I doubt I would have picked up the book. Who the fuck wants one of these covers peeking out at them from a shelf?

Morrow’s muted and indecipherable cover might not be the most technically well-crafted or even most fitting of covers for Sturgeon’s story, but its understated aesthetic and classic pulp feel make it stand out as one of the warmest and enchanting of the book’s covers. It’s the type of vintage cover that I always pick up and examine, a little rough around the edges and grimy yet friendly and inviting. That what was inside was even more inviting is a pleasant surprise.