About an hour into Miss Stevens, two characters touch each other. This might not be a notable occurrence in other films, but in this film, this is the first time that one person touches another, in any way. The people in this film sit in cars or theaters together, have sex with one another, have conversations around tables in restaurants or at counters in diners, even share a light while smoking cigarettes together, but at no point does one person touch another. In a film full of moments in which people try and fail to connect with each other, this moment of physical connection, a moment that feels intimate because of the lack of intimacy otherwise, feels profound.

Miss Stevens (Lily Rabe), a high school English teacher, is asked to accompany three of her students to a weekend drama competition. She is a young, awkward woman who struggles to maintain what she considers a normal, appropriate relationship with her students or to develop relationships (or even just have interactions) with other adults. Her students, Billy (Timothée Chalamet), Margot (Lili Reinhart), and Sam (Anthony Quintal), have their own ideas of how the drama competition is supposed to go and about how they should be interacting with their teacher outside of school.

The very first scene of the film shows Miss Stevens standing alone in the center of a shot in the audience of a crowded theater. Everyone around her is applauding, and she is crying. Slowly, the sound fades out, and she remains standing alone, in tears, with the camera close on her face. Someone offscreen asks her if she’s waiting for someone, gently prodding her into motion. She has a short conversation with this person, who never appears onscreen, before eventually leaving. Immediately, the film tells us that this is a woman who is deeply lonely. The first conversation she has is with a bodiless person, someone who might as well not exist.

The framing of the shots throughout the film continues to emphasize this isolation. Outside of that first scene, Miss Stevens is rarely situated in the center of a shot. She often sits off to one side, as if someone is missing from the other side; she sits in one of a pair of chairs, curls up on one side of a bed. As the film progresses, and characters begin to occupy these other spaces, either by sitting in the passenger’s seat of her car or in the next stall during a conversation in a bathroom, there is also a profound sense that a space in her life is being filled as well.

But the film is more than halfway over before the audience witnesses anyone touch Miss Stevens for the first time. By this point, she has had sex with another chaperone on the trip, but we never see them touch: we see them sitting in their underwear beside each other on the bed, and we see her lying naked in the bed afterwards, covered by a sheet, while the man she slept with sits in a chair by a desk. The two characters don’t even appear in the same shot at this point, as if having sex has driven them even further apart.

So the most intimate moment in the film comes in the form of an embrace between Miss Stevens and Billy, who is perhaps the first person to show interest in her and the experiences that have brought her to where she is in her life. Because her physical and emotional distance from others is apparent throughout the film, a hug, perhaps the most innocuous kind of physical affection, feels like the height of intimacy. In this scene, we learn why theater is so important to her, why she feels so alone, even though she is trying her best to connect to others, and we begin to understand why Billy in particular is the kid to pick up on those feelings in her. 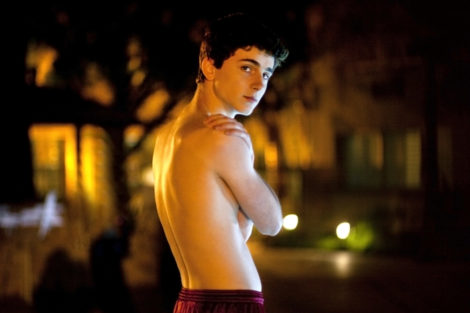 Unfortunately, this scene leads to the greatest frustration of the film as well. While the whole movie seems to work up to this climax in which we learn what we need to understand about Miss Stevens and Billy, it also leaves the ending to wrap up a film that doesn’t seem to know what it wants to leave its audience with. The denouement feels rushed and unsatisfying, the interactions between Miss Stevens and her students otherwise sound like an after-school special, complete with “Everyone is good at something” and “There are a lot of bad guys out there; you just have to find the good ones” morals. Margot and Sam feel like underutilized one-dimensional caricatures: Margot a perfectionist straight-A student who still feels as if she has something to prove, Sam an effeminate boy-obsessed gay teenager who has bad taste in potential boyfriends. They are meant to be people with whom Miss Stevens successfully connects, but the interactions fall flat, leaving a sense that all embarrassment and heartbreak can be cured by an earnest talk from a well-meaning teacher.

Billy seems to be the center of the story, the one who is meant to “save” Miss Stevens in whatever way that that is supposed to happen. But between a subplot about Billy and his unchecked mental illness (strongly implied to be bipolar disorder though never confirmed) and Miss Stevens’ own issues with intimacy and loss, the film takes on too much and then doesn’t leave itself enough room for a resolution. After the careful and well-considered cinematography, the actual plot feels abandoned at the end, giving the sense that everything is okay now, because of one conversation, one interaction, one instance of this group coming together to be a team that can succeed. It feels disingenuous and unsatisfying after the film has taken its time to meander through the nuance of pain and loneliness.

Maybe the lack of resolution is intentional. Maybe we as an audience are supposed to wonder if anything will change, if Miss Stevens herself is able to make a difference in her own life and if any of the “lessons” she taught her students also apply to her own life. If this was the case, it could have been handled in a more careful, considered way. When the film itself looked so beautiful, did so much to tell its story even beyond its writing, the lack of subtlety and bizarre jump in tone are almost a betrayal. This film might have been exactly what it was trying to be if it was perhaps 10 minutes longer and had given its themes the room to really blossom. As it is, it’s a beautiful film to watch, one that bleeds the loneliness it dwells on but ultimately abandons its own mood and leaves the end feeling abrupt and disappointing.

Elizabeth Brei grew up in Chicagoland, once worked at Disney World and has a cat named Moo. She holds an MFA from San Diego State University and can sometimes be found on Twitter @peachchild grumbling about kids these days or talking about Sailor Moon.